July in Dallas means it’s time for the Festival of Independent Theatres at the Bath House Cultural Center by White Rock Lake. Cooperative groups of artists without permanent performance spaces unite to bring to life unique, forgotten, overlooked or original one-act productions. Some are plays, others hard to define. All tend to the “edgy”, whether that means socio-artistically inspiring or over a cliff. The well-attended yearly event, now in its eleventh year, surprises and enchants, offers over four weekends something to appeal to or confound the theatrical sensibilities of just about everyone who relishes off the beaten path productions. 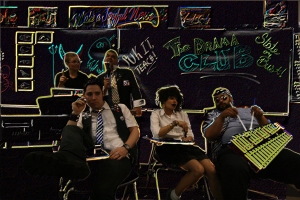 Rehearsing The Old Woman in the Wood

What follows is my evaluation of: THE DRAMA CLUB’s The Old Woman in the Wood by the Brothers Grimm, adapted and directed by Jeffrey Schmidt; AUDACITY THEATRE LAB’s Arsenic and Roses by Brad McEntire, directed by Jeff Hernandez; PEGASUS THEATRE’s Know-No by Matt Lyle directed by Kurt Kleinmann; WINGSPAN THEATRE COMPANY’s Seagulls by Caryl Churchill, directed by Susan Sargeant.

The 2008 Bath House Cultural Center website explains that “FIT was created in 1999 as an outlet for smaller companies without a permanent performance space to give them an opportunity to produce seldom seen, new, or avant-garde works. FIT exists to promote awareness and growth of Dallas area theatre through collaboration, participation and cultivation.” Of the four performances viewed so far, one stands out as a sterling example of the FIT mission. Jeffrey Schmidt’s adaptation of The Old Woman in the Wood is a highly imaginative, multifaceted, sometimes confusing adaptation of a lesser-known dark Grimm fairy tale for adult audiences. Interdisciplinary art forms in wide ranging scale intermix through dance, puppetry, percussion, nature, music, song, and magic. Styled almost as a children’s interlude with broadly drawn characters and grotesques, it makes an  artistically effective adaptation appealing to adult sensibilities. Maryam Baig Lush creates an intriguing heroine with nuanced vocal technique and precise, stylized movement. John Davenport, as the tree-encased human Lush’s character comes to love, provides fascinating visual and emotive characterization in spite of his “costume’s” movement limitations.  The forest setting he is part of looms provocatively, brooding and lyrical, and fully informs the performance space. John Flores uses a wealth of vocal and puppetry skills in expressing and flying an enchanted dove puppet that changes to reflect the main characters’ emotional and psychological growth, a feat of pure metaphorical magic. The production is a lovely “fit” for the venue and festival, hard to imagine in any other setting. And, according to the playbill, the play’s communally designed and constructed set and props are mostly made from found or recycled items. A+ for cooperative creativity on all fronts. The other three productions don’t rise to the same creative level. Perhaps there is good reason for these plays to be “seldom seen.”

Audacity Theatre Lab claims its mission is to develop and produce dynamic new works—“new interpretations” or “incubation and exploration of original works”. Arsenic & Roses offers little more than soap opera-style realism, not much fresh or new about it. Another ho-hum predictable entry in a long line of twenty-something romance and angst plays, this two-person show offers no unique or fresh perspectives on life and love or with the characters presented. Someone needs to let the actors in all three of the following plays know they don’t need to yell, grimace, thrash about or storm around the intimate acting space to be seen, heard and understood. Interesting that the least “realistic” production, the stylized adaptation of a fairy tale, offers layers of nuance and subtlety, whispers and silence, while its more naturalistic companion productions brim over with strain, din and artifice. It’s as though the latters’ performers attended a Loud, Fast & Busy Is Better School of Acting together and hope to outdo each other in declamatory technique. Ouch.

Jeff Swearingen is a sophisticated actor with normally commanding physicality, ill cast and/or poorly directed in Arsenic & Roses. He flounders, sleep-walks the role without conviction. No chemistry develops with Teresa Valenza’s character, no chance for it, given the pretentious overacting and lung exercising she exhibits non-stop. Destroy a dozen roses  centerstage at the top of the show, mostly ignore the proliferation of debris, tread all over the petals and stems like they aren’t there the rest of the time? Disappointing, pointless effect. Opportunity lost.

Pegasus Theatre’s director Kurt Kleinmann is known and respected for directing tight, suspenseful, highly stylized, large cast performances on a full-sized proscenium stage set, triumphant feats. Matt Lyle’s surreal script offers Kleinmann the chance to do something entirely different in The Bath House’s quirky semi-thrust intimate space with just two actors. Not an inspired realization, the intentional repetitiveness of the script verges on boring as directed; props are cumbersome and puzzling; the static perimeter set adds nothing to the play’s off kilter fantasy world that the two actors can interact with creatively.  A. Raymond Banda has some curious reflective moments, very effective, as he floats in and out of his desires and reality.  But Lorina Lipscomb is so busy being “active” and vocally out of control that no believable relationship can develop between the two. She really doesn’t need to shriek to be heard in the space, honest.

Wingspan’s Seagulls has the potential to be an ideal entry in FIT. Eminent postmodernist feminist playwright Caryl Churchill’s 1978 three-person play about an average British woman who gains celebrity status for an unusual talent is full of exquisite imagery and metaphorical language. It’s a delicate dramatic work, exploring the instability and fluctuating self-worth of an everyday housewife turned freakish celeb. Susan Sargeant has a lovely knack for directing such concept plays, so I can’t imagine why her three actors chomp up the text and scenery like hyper-caffeinated fiends. The two women employ English accents—Emily Gray’s native born, Cindy Beall’s painfully not so. Andrews Cope gave an exceptionally heart-wrenching performance as the stuttering Billy Bibbit in Contemporary Theatre of Dallas’ recent One Flew Over the Cuckoo’s Nest. In Seagulls his speech is so garbled and rushed, it’s almost incomprehensible. All three actors race through their lines, again overly loud. They win the white noise competition. It’s not a customary Wingspan Theatre Company performance. Like The Old Woman in the Wood, Seagulls feels quirky enough to be hard to mount outside a festival setting, wish it had been brought to life with the deliberate pacing and artistic nuance of The Drama Club’s original adaptation.