Sir David Hare, internationally honored actor, playwright, stage and film director, is considered one of the finest British playwrights living today. Earning a BAFTA Award (1979), the New York Drama Critics Circle Award (1983), the Berlin Film Festival Golden Bear (1985), the Olivier Award (1990), and the London Theatre Critics’ Award (1990), he has seen his distinguished works played with great success to audiences around the world, interpreted by some of the world’s finest actors. Amy’s View, playing at Theatre Three in Dallas through January 31, 2010, received its World Premiere at the Royal National Theatre’s Lyttleton Theatre in London in June 1997 with Dame Judi Dench and Samantha Bond in the key mother/daughter roles, repeated by them at the Ethel Barrymore Theatre on Broadway in 1999.  Closing my eyes during the opening night performance at Theatre Three, I could imagine hearing Dench and Bond’s voices in the roles and envision the singularly resonant chemistry and conflict they must have generated together. Amy’s View is a substantial challenge to mount in terms of scope, complexity of characterization and thematic context. It’s a granite-faced mountain of a play with gentle slopes leading up to it. Theatre Three’s cast straps on its climbing gear with ambition and care, yet it bogs down when the slopes grow steep and intense.

Linear in structure, this play takes place over a sixteen year period from 1979 to 1995 and deals with two intriguingly interwoven themes: unconditional love, or “sacrificial love” as playwright Hare describes it, and the clash of public art forms: theatre v. various manifestations of modern pop culture. Over four acts, or scenes, layers of personal relationship pour forth in intensifying cascades of revelation. The divergent cultural perspectives clash in a sort of counterpoint to the family drama, reinforcing the personal challenges and providing catalytic fodder for the oppositional characters to latch on to in conflict. I am not sure if any Dallas cast could truly master this play. I respect the Theatre Three cast’s valiant effort, while at the same time I am acutely aware of the production’s shortcomings.

Scene One, the exposition, should crackle with dramatic tension and pause and define the characters in opposition much like players on a chessboard. When Esme, the grand dame actress mother, enters, she should command the stage space with accustomed, regal aplomb and dictate the tempo of all that transpires. Rapier-sharp repartee and maddeningly slow deliberation are her fine-tuned weapons. She should own the stage. All other characters should feel vulnerable, whipped about by her whim, her slightest glance. Connie Coit certainly looked the part and has the vocal power and quality to deliver it. 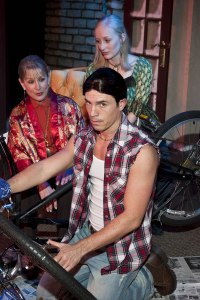 Sadly, her entrance seemed tentative, her motives not clearly defined; she never quite commanded the space. As the play’s primary catalyst, she never exhibited the drive or energy to light requisite fires. With so little to react to, the other characters appeared hazy and isolated from each other. Amy, the protagonist, played by Danielle Pickard, needed to demonstrate, throughout, the very soul of pure unconditional love. Mostly she seemed frustrated that no one will listen to her. She grew more strident, bitter and unloving as the play proceeded. Her climactic histrionic scene was very stage-y, did not arise naturally. I watched her acting the role but felt no sorrow for her character’s circumstance. Hare wrote Amy’s View as the middle part of a trilogy about love relationships; it’s integral that Amy embody “unconditional love” with truth and simplicity.

As Dominic, Amy’s narcissistic, ambitious lover/husband, riding the tide of materialistic pop culture, Kevin Moore had the presence, charisma and voice to carry his role well. In Scene One, he wears a ridiculous moppet of a wig and a wife-beater t-shirt that make him look more like a hunky biker dude circa 2002 than an aspiring bohemian filmmaker in 1979. As his character matures through the play, he might as well be playing different characters. Often his costume distracts, does not seem to fit him properly in later scenes, nor reflects the fashion-conscious sense of a media empire entrepreneur on the way up. He looks “frumpy.” Moore is handsome and intense, offers a focused delivery with a sardonic, leonine physical quality. He’s well cast as Dominic. I could not tell if he didn’t grasp the arc of his character’s development as an actor, or if he was simply directed in a disconnected way from scene to scene. In any case, the goofy Scene One wig does him, and the play, a real disservice.

The other three characters help advance the plot with actors who look appropriate to their roles. Sonny Franks as Esme’s suitor/ investment advisor Frank brings a lumbering, bewildered everyman energy to the work, appealing in contrast to Moore’s Dominic. But Franks gives the audience little to ponder when it is revealed late in the play that he has taken risks with Esme’s investments he never took with his own. Did he intend to control her by losing her fortune, or was it circumstantial? Terry McCracken, with a convincing British accent, and Jason Kennedy, also perform.

In most major reviews of the initial productions of Amy’s View, the play’s set and its transformation over sixteen years are discussed as an element of primary importance. “The curtain pulls up and opens like an ever-widening camera lens,” which is an interesting concept, as the play is metaphorically a “series of snapshots from a woman’s life.” (Terry Byrne, Boston Herald. Boston, Mass.: Apr 26, 1999). Theatre Three’s set seems thrown together using random thrift shop elements in the first scene, dowdy rather than opulent; Esme’s deceased husband’s paintings, hung floating over the main entrance, look like the work of a mediocre dilettante, rather than classy representations of a lesser-known impressionist, as the play describes them. As the play progresses, we see less furniture on stage. Its loss neither conveys encroaching poverty nor the passage of time. The final scene, played on an elevated theatre stage dressing room, rolled in on castors, looks curious, trendy, but doesn’t help to define Esme’s final brave moments of resolve and illumination. Theatre Three’s Talley’s Folly set made an encompassing statement, illustrated its playwright’s work exquisitely. The set, costumes and other technical elements of this production look hastily thrown together with little plan. This shortchanges the production.

For Theatre Three to open up Dallas theatre in 2010 by mounting Sir David Hare’s Amy’s View is a bold, ambitious and admirable undertaking. I think one 1999 reviewer summed up the play’s overall needs best: “Amy’s View, David Hare’s play opening tonight at the Barrymore Theatre, could easily, but for the presence of Judi Dench, be taken for nothing more than a bit of witty and stylish fluff, a soap opera, a fictional theatrical biography of the pitiful last 16 years in the life of a fading actress.”  No Judi Dench. No defining theatrical experience.