Snuggle up tight, lover, and pay your debt.

When Alan Rickman directed the 1888 play Creditors in London and New York in 2008, he described it as “three characters dragged through a hedge backwards in 90 minutes,” Make that a humongous holly hedge with sharp barbs.

Creditors is a rank, double-dip dose of double cross and revenge from the twisted mind of love-embattled Swede August Strindberg, considered by many to be the most influential playwright of his time and the “father of modern drama”. Its mounting at Broken Gears Project Theatre under the direction of Rene’ Moreno assails the senses as a Sweet-Tart sharp ‘immorality play’ and holds its audience captive at seat’s edge. Which of its characters is the real victim or tyrant as the love-hate triangle unravels? Evan Fuller, Meridith Morton and Elias Taylorson go for the jugular with unparalleled intensity, against a dream-like, austere Victorian seaside resort set awash in peaceful, creamy hues of blue, grey and bone white with faint hints of blood-red poppy.

Peaceful, you ask? Only environmentally speaking. Nothing peaceful about anything depicted on stage. Moreno has extracted outstanding performances from each of his extremely capable actors. 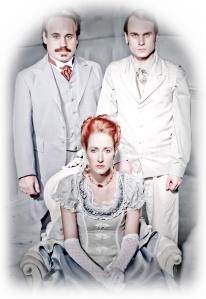 He holds them tightly focused on each other with mannered and stylized 19th century restraint. That’s on the surface. Underneath? Each reveals his/her savage betrayal of intimacy in accordance with playwright Strindberg’s naturalistic style, the very essence of which earns his “father of modern drama” title. It feels akin to standing by the ocean as the tide gently laps your feet but not noticing the tidal wave on the horizon until it crashes over you.

Want to see the real thing, a masterwork from the master emulated in pale homage by so many modern playwrights? Want to see it performed skillfully, artistically, honoring both inner and outer realities of modern man? Well, then: snuggle up tight to Broken Gears Project Theatre, lover, and look within. It’s time to pay that creditor.

Creditors was first performed as part of a triple bill with Strindberg’s  Pariah and The Stronger on March 9, 1889 at the Dagmar Theatre in Copenhagen, under the auspices of his newly-formed Scandinavian Experimental Theatre. (Wikipedia)

One thought on “Broken Gears’ CREDITORS: Debt Paid in Full”