Eric Steele is a man with plans and vision. Actor, playwright, arts venue entrepreneur – he’s a savvy partner with film industry consultant Barak Epstein’s Aviation Cinemas. Them’s the folks that took over the lease of the Oak Cliff Foundations’ historic Texas Theatre on Jefferson Boulevard in 2010 and are making giant strides in turning it into a vibrant destination venue for concerts, special events, quirky cinema, and now…unique stage productions. 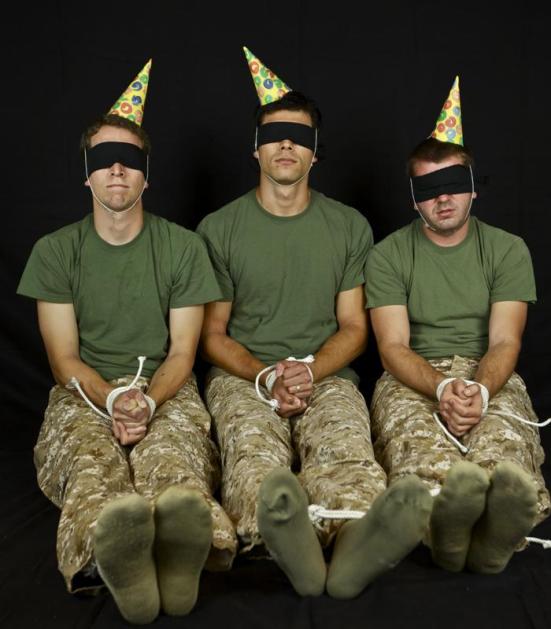 The Birthday Boys by Aaron Kozak

Steele’s performance roots are in live theatre — he earned a theatre degree at University of Oklahoma after graduating from Dallas’ Highland Park High School. Even as the cinema/ event destination aspect of the Texas theatre has blossomed, he’s had it in the back of his mind to re-introduce Dallas audiences to live stage performances of edgy, non-traditional works, in shorter runs than conventional theatre schedules, at his laid back, hip, refurbished venue. The addition of a brand new 40’ retractable screen to the viewing space (great for both film screening and multi-media contemporary staging) whetted his appetite. But what live stage show should he bring in to re-inaugurate his space?

Enter Aaron Kozak, playwright, screenwriter and production management professional, Texas born and raised, now based in Los Angeles. Colleagues from University of Oklahoma college days, Eric and Aaron had kept in touch, even though life took them to different locales. Kozak sent Steele a stage script a year ago, inviting him to audition. Swamped as he was with the new Texas Theatre launch, Steele turned him down; but the unique script stuck in his mind. He kept abreast of its development process. When The Birthday Boys took the Hollywood Fringe Festival by storm in 2010, winning the Fringe First Award for Best World Premiere and the LA Fringe Critics’ Choice Award, he was delighted for his friend. He approached Kozak, visiting family in Texas over Christmas, about mounting it at The Texas Theatre over Memorial Day weekend 2011, before its premiere in New York City. The right time, the right venue, the right play; the friends shook hands on the deal. In its southwest regional premiere, The Birthday Boys re-inaugurates The Texas Theatre for live theatre May 26 through 29.

After Aaron Kozak’s The Birthday Boys won top honors at the 2010 Hollywood Fringe Festival, it ran for five sold out weeks at LA’s Noho Stages, earning critical acclaim and evaluation as one of LA’s top-rated plays for 2011. Nobody could have been more surprised about its success than its playwright. It was his first entry into the highly competitive fringe milieu, which attracts over 200 productions yearly, many written and performed by long-time, well-known artists. “The whole fringe scene is an exciting, creative experience — The Birthday Boys was my first submission. So many legitimate theatre people came out of the woodwork to participate and share ideas. We really didn’t expect to win anything. We didn’t even plan to go to the awards ceremony, and then we won!”

In LA, Kozak supports himself as a freelance production accountant for film and editing companies and agencies. The genesis of The Birthday Boys? Kozak went to Vietnam as a production accountant on a film project that got shut down. With an extra day before returning home, he toured the ‘Hanoi Hilton’ Prison. “It was mind-blowing to see the actual prison cells, the tiniest of closets, barely room to stand, sit or lay down. I was overwhelmed with the idea of what it would be to live as a POW in such terrifying conditions.

I brought my horrified impressions of what those brave soldiers went through home with me. And started writing. My play has no left or right political agenda; it deals with the human challenges presented by any war, how character and commitment to principles of honor can sustain people in unique, life-threatening settings. These are real, genuine heroes but they represent everyman, too.” Who will resonate with the production? “Everyone can, service people especially. I believe George Bush and Barack Obama could both see this play and take home the same message about the power and dignity of human resilience.”

The Birthday Boys tells the story of 3 U.S. Marines at the Al Asad Airbase in Iraq, who face the unimaginable terror of being taken as a prisoner of war. The first Marine (Trevor David) is a hotheaded joker, who traded shifts to work with his friend and fellow Marine (Nando Betancur), so they can celebrate their birthdays together. Their plans are squandered after falling victim to an ambush that leads Betancur’s character to cut and run.

In the warehouse, bound and blindfolded, David’s character must deal with the betrayal of his brother-in-arms whom is captured despite trying to flee. The only thing keeping David at bay is the leadership of the third Marine (James Ryen). The POWs make bets, tell stories, make fun of each other; do anything they can to keep morale up. However, the fun doesn’t last.

Without the use of arms, legs, or eyes, the three Marines battle their fear with humor and faith. They learn about humility, humanity, and honor on a journey to freedom and redemption.

JAMES RYEN’s credits include NCIS: Los Angeles, Days of Our Lives, Thor, Dark House, Shuttle, Heroes, Lie To Me, CSI: Miami, and Without A Trace. He received critical acclaim for his lead role of Tom in the New England premiere of Fat Pig with the SpeakEasy Stage Company and has performed in over a dozen productions of Shakespeare. He was raised in San Antonio, Texas.

The cast also welcomes two non-Texas: ALI SAAM, an Iranian-American actor who plays the ruthless leader and one of Hollywood’s hottest up and coming stand-up comics, MICHAEL BURNETT, who performs regularly at The World Famous Comedy Store and the John Lovitz Comedy Club.

The Birthday Boys is dedicated to Aaron Kozak’s grandfather William Bonner, who won a Purple Heart in WWII, wounded in the Battle of Peleliu. He will drive in from West Texas to attend a performance of his grandson’s production this weekend.

In its southwest regional premiere, The Birthday Boys re-inaugurates The Texas Theatre as a live theatre venue May 26 through 29, 2011.

One thought on “The Texas Theatre: Live with “The Birthday Boys””