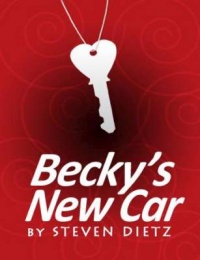 The story, more like a sitcom soap opera with a muddled message than a conventional play, follows the first world problems of Becky (Lisa Fairchild, terrific in WaterTower Theatre’s recent The Traveling Lady). Married for 28 years with a “content life” and working at a Lexus dealership, she’s mother to Chris, a schlumpy, basement-dwelling grad student, and wife to a lovable bear of a blue-collar husband, Joe. She gets the wanderlust itch when she happens upon a wealthy widower, who meanders into the dealership to “buy some cars” as gifts. He fixes his own listless nature upon her as a potential match, under the misapprehension that she has also lost a spouse.  Becky expends little energy trying to correct this misconception, and then goes on to embrace her deceitful double life with gusto.

The play’s redeeming qualities are its observational, poetic even, head-nodding, familiar truths, and adroit turns of phrase and situation. Where it runs out of gas and encounters problems lies in its 4th wall gimmicks, selfish characters, and the droning schmaltziness of its second half.  The audience interaction and participation is sort of cute at first. Then the floodgates of annoying call and response from the crowd open wide, even when inappropriate and not welcome.  Offer a beer or soda here, bring folks on stage, give them menial tasks; soon enough you have rampant talking and distracting rustling.

It’s a testament to the charms of pixie, Sandy Duncan-esque Lisa Fairchild, who almost creates a sympathetic character out of a woman who hurts and deceives her loved ones out of some unexplained, formless middle class ennui.  She does not deserve the attention of her sweet, wisecracking husband, whom she treats as a fool.  Mark Fickert summons his inner Roseanne’s Dan Connor for this regular Joe six-pack and nearly saves the play with his giant-sized affability.  Curtis Raymond Shideler as the “eternal freeloader” of a son, constantly engaging in psychobabble university-speak to diagnosis everything, provides even more comic relief.  John S. Davies’ sad-eyed Walter the wealthy widower is a little lost from the loss of his wife; yet he is redolent of success and beguiles with a six-figure bolstered calm. 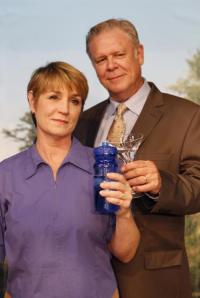 Set design by Clare Floyd DeVries is lovely in a utilitarian way. Sharon Standard’s wardrobe, designed by Robin Armstrong,  is character perfect and fitted well. There are some satisfying highs and great character work here; however, that little bit of new car smell cannot cover what amounts to a lemon in the end.

Editor’s musings: Austin resident Steven Dietz writes of his play in the program to the production he directed at Austin’s ZACH Theatre in 2010, “The road to your mind and your funny bone [is] much more treacherous and unpredictable than the road to your sympathetic emotions.” A plea for mud and snow tires?

The genesis and subsequent road trip of this play are possibly more intriguing than the work, itself. A Seattle businessman commissioned Steven Dietz to write Becky’s New Car as a birthday present for his wife in 2008, requesting only that it “not be too dark.” Among those attending Circle Theatre’s regional premiere of the play will be that couple, the Staadeckers, Charlie and Benita, who have visited all seventeen of the theaters presenting their commissioned birthday play.

“We’ve kind of become groupies. We come and see the production and, if asked, we’ll speak about the process of commissioning,” Benita says. “It [commissioning new works] has expanded our lives,” says Charlie. “It’s the best return on investment I’ve ever made.” What a keen idea and unusual form of advocacy. Any readers of criticalrant.com got a special date or anniversary coming up that deserves commemoration with an original play? I know some outstanding regional playwrights who would be delighted to oblige….