“When I think of death, I only regret that I will not be able to see this beautiful country anymore…unless the Indians are right and my spirit will walk here after I’m gone.”

Speak the name “Georgia O’Keeffe” aloud, quietly, distinctly. Do you feel the mystery it evokes? Do you smell the New Mexico desert in bloom, face into the wind whipping down from Pedernal Mesa, stroke the rough or smooth-polished contours of the black rocks and bleached cows skulls scattered about, squint far into its somber-hued vistas?   There’s powerful magic in her name, just as there was in her life. In 1934, celebrated American visual artist Georgia O’Keeffe visited remote Ghost Ranch, located 120 miles north of Albuquerque New Mexico, for the first time. It is said that she knew at once she would live there. In 1945, she purchased a crumbling, desolate hacienda eighteen miles from Ghost Ranch in Abiquiu and refurbished it, making it her home and studio base in New Mexico.

“It’s my private mountain, It belongs to me. God told me if I painted it enough, I could have it.”

Unique as a successful woman painter in a world jealously dominated by creative men, O’Keeffe had two one-woman retrospectives in the 1940’s, the first at the Art Institute of Chicago and the second at the Museum of Modern Art (MOMA) in Manhattan. It was the first retrospective MOMA ever held for a woman artist. She was elected to the fifty-member American Academy of Arts and Letters n 1962 and was elected a Fellow of the American Academy of Arts and Sciences in 1966. On January 10, 1977, President Gerald R. Ford presented O’Keeffe with the Presidential Medal of Freedom, the highest honor awarded to American citizens; and in 1985, she was awarded the National Medal of Arts. Yet with all the many honors and honorary degrees bestowed on her and major museum retrospectives held word-wide celebrating her art, she continued to find her soul space in and glean her artistic inspiration from her beloved mountains and vistas of northern New Mexico.

“The bones seem to cut sharply to the center of something that is keenly alive on the desert even tho’ it is vast and empty and untouchable…and knows no kindness with all its beauty. All the earth colors of the painter’s palette are out there in the many miles of badlands…”

April 20-22, Dallas theatre audiences will be graced with a rare treat. One of our region’s leading actresses, Carolyn Wickwire, directed by another distinguished Dallas based performance artist, Ouida White, will perform Lucinda McDermott’s 1991 one woman play “O’Keeffe!” at Theatre Too, graciously hosted as an “artist’s project” by Theatre Three. Drawn directly from O’Keeffe’s diaries, letters and biographic documents, the play shares much of the persona and the psyche of this remarkable woman, a loner, a devoted lover, an ambitious artist, an exacting genius with a paintbrush. 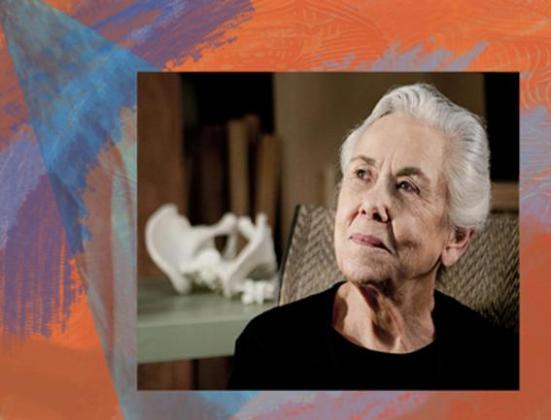 Wickwire and White took a break from their full rehearsal schedule to share aspects of their creative odyssey in the development of this co-created project with freelance arts journalist and theatre critic Alexandra Bonifield.

Which of you had the cool idea to produce this show?

Carolyn: In early summer 2011, I decided I needed to find a unique one-woman show to perform. A local playwright had approached me about Georgia O’Keeffe several years ago, and I had seen an incredible exhibit of her art in Fort Worth some time ago. I kept thinking about her and wondering. So I did some on-line research and came across this play. I knew it was exactly what I had in mind. I immediately thought of Ouida for my director and called her.

Ouida: Talk about a life inspired by daydreaming. I had started having this vision of the perfect job and life with theatre and travel intertwined, and then I got Carolyn’s call…what a ride it’s been!

You two took a trip, a pilgrimage, to O’Keeffe’s New Mexico. What was that like?

Carolyn: We spent five days in northern New Mexico, staying at the Abiquiu Inn. We toured her home and Ghost Ranch. An amazing trip. I really began to feel the magic of the region that captivated Georgia and the power that made her a great artist. Ouida: Absolutely, we met people who opened our eyes to new aspects of O’Keeffe’s world and life and gave us fresh insights we’ve used in developing the character and the arc of the piece, totally unexpected.  There are things that we carry daily into rehearsal, that seem to ground us in the soul of the work, its essential reality, that presented themselves serendipitously in New Mexico. It was simply meant to happen.

Without giving the storyline away, what can we expect to see with your performance?

Carolyn: It’s a play in two acts. The core of it, its heart, is Georgia’s love and commitment to her life partner, the photographer Alfred Stieglitz. He took thousands of photographs of her over the years, in some ways immortalized her through his work. In the play, the audience will experience her dilemmas, the choices she had to make as a woman and an artist. They will get to watch her strength of vision develop as she matures.

Ouida: They will get to see two different “Georgias” brought to life through this playwright’s art: the real living, breathing one, and the “eternal” Georgia, the one who exists forever as creative spirit.

Carolyn: And we plan to tour with the show: to Marfa, maybe Tennessee and other regional venues as the word gets out about our production.

3 thoughts on “Where Her Spirit Walks On: O’Keeffe! at Theatre Too”