Don’t you love it when theatre companies make stuff up and it unravels on Facebook? Here’s a recent example:

Email I received from Undermain’s Press Director Dana Cobb on 3/10, re: press seats for 3/22 opening of We Are Proud to Present…: “Undermain Theatre strives to make as many performances accessible for reviewing press. Due to growing local press corps, we have adjusted ticket availability on Opening Night, March 22nd, to serve our Board Members, donors and single-ticket buyers. Accordingly, will have press performances for We Are Proud to Present on March 26th and 27th at 7:30 and March 28th and 29th at 8:15pm. I would like to invite you to the show on any of those performances.” Cobb’s email was copied to Katherine Owens, Artistic Director.

On March 25, Dallas News’ reviewer Nancy Churnin posted an entry on her Dallas-Fort Worth Theater Facebook page about the Undermain performance she had attended to review. Opening night, 3/22/14. Puzzled, I posted the following in reply. “When did you see it? I was told they weren’t seating critics on opening.” She responded, “I went Saturday night (March 22). I saw Mark and Martha there.” (reviewers Mark Lowry, Martha Heimberg) Guess they got a different email than I did. Are they now considered “board members, donors or single-ticket buyers”, along with their non-paying companions? I think I saw reviewers Christopher Soden and Lauren Smart in the house on the 26th, when I attended. Must have received the elaborate, hokey “adjusted seating availability” spiel, too.

I thank all theatre companies that work hard to fit in all interested critics at openings, seat us with advantageous stage visibility and don’t play “press favorite” games. 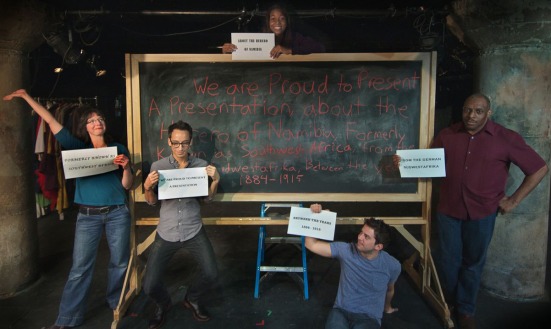 Cast of We Are Proud to Present….

I’m tired of seeing contemporary plays, barely literate in terms of literary value, presumably masquerading as a means of Delivering Diversity. So many, just like We Are Proud to Present…, use a meta-theatrical conceit (here, a troupe of bickering actor divas rehearsing/ pouting) to distance the audience (mostly rich, mostly white) from its potentially upsetting subject matter. A painless way to help them shed a crystal goblet’s worth of white man guilt? Trendy, edgy, glib, “conversational” and artistically starved like a spewed out TV drama…no depth of character arc, plot or conflict, no resolution at all. Temperamental actors storm off the stage; it’s over. Nothing needs resolution. Non-profit companies producing this clever shell game style of theater can nestle it under a “diversity” umbrella to apply for more grants, while not actually exposing their regular paying audiences to the discomfiting emotional messiness of dealing with unpleasant experience. “Let’s just talk about ‘it’ rather than show ‘it’, then ask for money to support ‘us’ doing ‘it’.” I’d rather see Athol Fugard’s spare, heart-slashing, politically relevant plays or more haunting, lyrical works from David Rabe. There the audience gets drawn into valid human drama and lives through literate arcs of genuine, risky theatrical experience. Actors in We Are Proud to Present… continually remind the audience they are watching a play about an event, not as art form to elevate or illuminate the experience, but as smug protection from immersive experience. It pairs well with a pleasant evening begun with good wine and fine dining. On to dessert and after show libation! I feel cheated by this sort of navel-gazing. Dallas suffers from a plague of this type of safe, trendy charades, often with crude language tossed about like stale popcorn to spice things up. I’d rather see a non-stop run of classic farce or parody and revivals of great musical theatre, than another sleight-of-hand enactment of disembodied, deodorized meta-theatre.

The cast of We Are Proud to Present… certainly has chops: Blake Hackler, Christopher Dontrell Piper, Bryan Pitts, Jake Buchanan, Shannon Kearns-Simmons, Ivuoma Okoro. They each get a shot at behaving like spoiled children here and are capable of a great deal more. Directed by Dylan Key.

“We Are Proud To Present A Presentation About the Herero of Namibia, Formerly Known as South-West Africa, From the German Sudwestafrika, Between the Years 1884-1915” by Jackie Sibblies-Drury, runs through April 19, 2014.