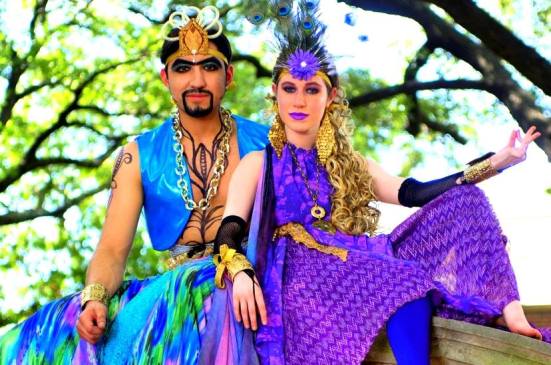 Oberon and Titania, causing all the fuss in A Midsummer Night’s Dream

Four lovers all mixed up!

How many hundreds, thousands, of modernizing stylistic adaptations has Shakespeare’s A Midsummer Night’s Dream suffered through in the name of accessibility or some director’s whim over the years? Some work well. Some bury the play. Some simply make me want to puke. With Dallas’ Junior Players’ production, billed as “A Bollywood Spectacular”, running through August 2 at the Samuel-Grand Park Amphitheatre, a triumph of complimentary, ephemeral magic takes place. One of the most gorgeous evocations of the Bard’s works to grace the Amphitheatre in some time, bursting with joy and vitality, this production succeeds on all levels. Junior Players, in its 60th year of serving the arts-loving community and producing top-notch educational theatre, rises again to the challenge.

Co-directed by Valerie Hauss-Smith and Anastazia Munoz, every scene of this romantically convoluted play makes definitive sense as the twenty-three high school artists (from fourteen schools across the region) apply their craft with focus, pacing, clear delivery and understanding of character arc and intention. Whew! One doesn’t often get to see all the pieces of this prancing puzzle fit together quite so effectively. From the smaller Mechanical roles to the brooding majesty and feuding fury of Oberon and Titania, NOT ONE ACTOR in this production stands listlessly still declaiming mumble-fashion his/her lines or wanders about the set in aimless search of coherent blocking. It’s efficient. It’s dramatic. It’s energized. It’s SHAKESPEARE as it should be done. Hauss-Smith concludes her ten-year tenure as Junior Players/ Shakespeare Dallas co-production director with this “Bollywood Dream”. It makes a fitting swan song for someone who clearly invests enormous passion, dedication and understanding of text to acting challenges with the work at hand. Co-director Anastasia Munoz will carry on this worthy tradition.

For inspired beauty in spectacle alone this “Dream” soars. Bruce R. Coleman’s Bollywood-inspired costumes radiate magical fantasy in cascades of lush, bright-hued, silk, satin, sequin and brocade, with sensual bellies gyrating beneath mysterious turban and swaying veil.  And such a pair of warring fairy lovers the Faerie King and Queen make, railing, venting, conjuring and wooing from upstage parapet archways down to front of the house. Zachary Valdez’s Oberon oozes power and masculine brio. When he shakes off thunderbolts with a casual toss of the hand (Vikas Adam and Marco Salinas, sound design) his threats menace with animated veracity and punctuate his measured tones. Audrey Keen’s Titania seems part Goddess Artemis of the Forest and fantasy seductress. A fine match for Oberon, she speaks her outrage and drug-induced delight in Bottom turned Ass with queenly command.

Oberon’s hench-person, the hyperactive, error-prone and effusive Puck, gets a dynamic comic realization by lithe, comely, lighter-than-air Kristin Raveneau. She hits all the right notes to please an audience that knows the play well, while defining a charming, eccentric character for first-time viewers.

The four lovers, wandering the woods in various states of romantic enthrallment, are exceedingly well cast. Maison Kelly as spunky, very short Hermia pairs well with Adam Rodriguez’ awkward, seemingly devoted Lysander. Callous Demetrius inspires as much sympathy as disdain, in spite of his “love’em and leave ‘em” cavalier attitude to the over-smitten Helena. Eliza Palter gives as strongly developed a performance of the self-deprecating, brainiac Helena as you might see in a pro production. She exhibits unmistakable stage presence and practiced wisdom and nuance in line delivery. No caricature whining dependent is this Helena; she’s someone that tall, striking Carson Wright’s Demetrius should consider a worthy equal and mate.

Anybody familiar with A Midsummer Night’s Dream waits eagerly for the final play within a play scene, where the country rube mechanicals get to perform their version of “Pyramus and Thisbe” before the Duke and royal company in worst possible amateur theatrical style. Direction by Hauss-Smith and Munoz takes this scene precisely where it needs to go, with Bottom the weaver attempting to upstage everybody with “inventions” and prolonged dying and other mechanicals falling in and out of character at crude, untimely whim. Dante Flores, son of respected regional artists John Flores and Christina Vela, upholds his family tradition by offering a confident, genuine portrayal of the spell-bewitched Bottom. His clueless, lovable Bottom never quite realizes how ludicrous he looks. His braying as an Ass succeeds as both believable and ridiculous; and his narcissistic hijinks give the coup de grace to the play within a play with resounding finality.

Full ensemble dancing and singing to Indian music from traditional film and prayer weaves elegantly into the action, always enhancing, never distracting. And every song appears in the program, fully translated. A Midsummer Night’s Dream can be viewed as a pageant celebrating love. This production celebrates Love and the mystical qualities of love’s union with pure exuberance. Does it deserve standing ovations and cheers at conclusion? You bet. What a send-off for the talented Valerie Hauss-Smith.