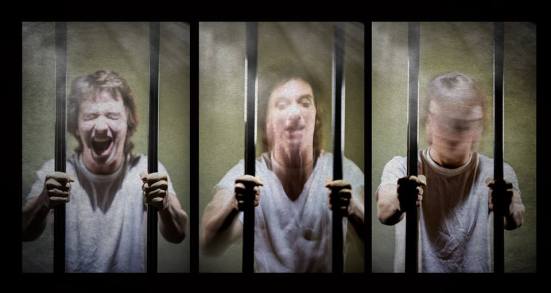 Regional esteemed professional actor/playwright Van Quattro put his heart and soul on the line in his successful autobiographical one man show Standing 8, portraying his search for love and self-worth as an angry, unstable young man in LA. It’s a gripping, honest and poignant confession. I witnessed several versions as he dug deeper and refined it over a period of time. With each new version he allowed the audience closer and closer to aspects of himself most people would never share in public. Saturday July 22 Quattro’s next breath-stopping exercise in vulnerability, Tommy Cain, opens at the 2017 Festival of Independent Theatres at Bath House Cultural Center. Semi-autobiographical in nature, this solo show ups that vulnerability quotient by including a bath scene between the show’s defiant solo character and his mother. Disturbing is understatement as a descriptive here, viewed from a conventional cultural point of view. Can we just pause a moment, breathe and consider?

“…she turned me around and started drying me off, and she held me close, that felt good. She dried me everywhere. Just me, just mom, the towel, the sun through the window. I never felt warmth like that in my life.”

Quattro expounds on the rationale behind the scene. “In some ways, Tommy Cain is an ode to the mother, honoring love that can exist between a boy and his mother. Both need connection and love, yearn for it desperately, a universal human condition. 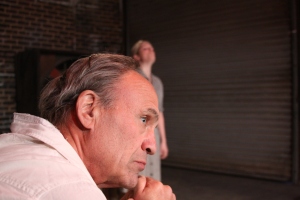 Neither have any idea of how to express it appropriately. Tommy, at age 7-8, is a total innocent. His teen-aged memory of what he sees — the soaping, the physical closeness, the toweling off and his response — none of it is in the least disgusting or exploitative from his perspective.” “I never felt warmth like that in my life,” he recalls. Quattro sees both characters, drawn from his life experience, as survivors, expressing love however they can when the chance to do so presents itself. Some in the audience will find this play, this scene, disturbing to watch. Explosive reactions have appeared at previous staged readings/performances. Quattro hopes his FIT audiences will view the work in context, recognizing and respecting his honesty in the portrayal, without judging. It’s a powerful expression of vulnerability. It honors the mother and her love, as warped as that may seem. Art, at its best, exposes us to the nuances and layers of human expression and communication and affirms our existence. Please open your heart and mind to Tommy, his mother and Van Quattro if you attend Tommy Cain at Fit 2017.

Quattro’s female counterpart at FIT 2017 is Sherry Jo Ward with her dramatic, confessional play Stiff, an exercise in intense physical as well as emotional vulnerability. The work portrays her experience with the onset of Stiff Person Syndrome. My review of the show: https://criticalrant.com/2017/07/18/the-serendipity-of-sugartits-stiff-at-fit17/

Stiff premieres at FIT 2017, a labor of love, frustration and committed passion to perform by a determined creative artist. Equity actor Sherry Jo Ward, age 40, should be at her peak, in demand as a lead actor in a distinguished career. Instead, her life arc has undergone a complete transformation due to the onset of this neurological autoimmune disorder with no cure. No shrinking violet, she carries forward, auditioning when the opportunity presents itself and conceiving/performing this solo play. Confined at home on a walker unless others transport her, she started writing Stiff in 2016, coming up with bits and pieces anecdote-style, based on her day-to-day experience of SPS. Honest, full of humorous commentary (why cry when you can laugh?), the work reveals her daily challenges with total vulnerability. A realistic optimist, she confesses the play had no structure until Tarrant County College hired her in 2016 to teach Introductory Acting. She engaged a disability bus to transport her to and from campus, so her revelatory bus rides now form bookends for the work. There is no “happy ending” here; it’s just survival. Preparing this launch has presented challenges unique to her circumstance. She realized early on she might need a “helper” during performances, someone who can join her on stage if she calls out the assigned “safe word” sugartits… if/when she needs assistance thanks to her uncontrolled, painful muscle spasms. Ward originally planned this role to be given to an audience member but as performances approached realized it made more sense to have a trusted support person seated within easy reach in the house. (Stiff Director Marianne Galloway and co-creator Jessica Cavanaugh trade this role at FIT). Not all the FIT performance slots coincide with Ward’s rigorous scheduled medication routine for pain relief with muscle relaxants. The afternoon performances provide the greatest challenge to her focus and the energy required to perform. She carries on. Ward is recognized and much loved across the US as a performer and arts educator. Requests are flooding in for a national tour, which she hopes to have the stamina and strength to honor. She expresses surprise at how often the word bravery comes up associated with her performance of Stiff. Perhaps living the daily challenges and vulnerability cloud her perception of the magnificence and scale of her accomplishment. Stiff would be a terrific play if Ward were just acting it, not actually living it. On the bus ride in Stiff a disabled person tries to comfort Ward by telling her, “I love you. I’m here,” responding to one of the most universal of human needs. That desire for love and connection make both Tommy Cain and Stiff transcendent artistic creations. Honor them with your attendance. Comfort someone with those words.

For tickets and to learn more about all of the 2017 productions go to: