Hullo, Hamlet: you dashing, dizzy, doomed Dane. Wherefore did your intrepid Shakespeare Dallas director Rene Moreno deign to dilute your dimensional drama by employing a stuffy, flat version of your life’s demise? Whitewashed by conventionally prudish Victorian actor/ adaptor Edwin Booth, this version eliminates the politics and most of the conflict and passion in the Bard’s art.  What’s left, alas, poor Yorick, is the stark, bleached bones of what is considered by many to be Shakespeare’s greatest tragedy. Ahem. 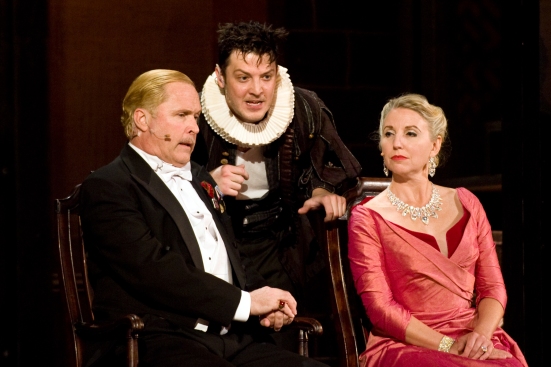 Shakespeare Dallas mounts a visually lush, austere production of the gripping classic set in post-WWII Europe, an era of social and political transition perfect to reflect the upheavals and transgressions that mark The Tragical History of Hamlet, Prince of Denmark, all of which could make great live theater. The shapely, elegant post-war period costumes in fulsome hues and haunting and haunted scenic design (Jacob A. Climer), the somber pooling and wash of light emphasizing shadow as much as illumination (Adam Chamberlin), along with Newton Pittman’s mood-enhancing composition and sound design promise a mature evening of first rate theater for settled Bard admirers and novices alike. Moreno’s cast of solid, well-versed actors dutifully follow blocking and deliver lines with ease and crisp precision, only occasional odd emphasis. Sara J. Romersberger’s fight choreography in the fatal fencing scene couldn’t have been more realistically believable as it goes wildly awry with mistake and mayhem. Sad to say, this script adaptation just can’t deliver anything but sallow and flat, toothless where it requires fangs, sanitized where it should ooze intense pheromones.

What works for me? John Pszyk sets off the tragedy in sharp relief and looms larger than life with regal, horrific outrage as the suffering ghost of murdered King Hamlet. As the Player King, he brings without Hamlet’s play within in an engaging, reflective, calculated to ‘please the gentry’ manner, the ever accommodating impresario.  Jenny Ledel’s Ophelia sweeps in with grace and vibrant feminine wiles, offering a comely, complex love object for Prince Hamlet’s soulful, conflicted worship. 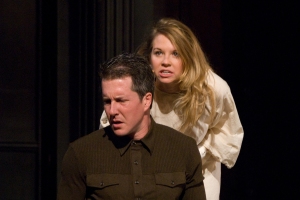 She enlivens the production’s two most compelling dramatic moments: silently preparing to intrude upon Hamlet’s manic ruminations and engaging his attack, as seen through an upstage doorway, and disintegrating in full-on mental and emotional breakdown after Hamlet’s cruel rejection and her father’s pointless murder. Moreno’s Rosencrantz and Guildenstern, those hapless lads immortalized into contemporary absurdity by Sir Tom Stoppard, express a fittingly baffled distaste for their assigned duty of “making nice” to their college chum Hamlet and a terrified dis-ease at Denmark’s engulfing rottenness. Small roles, solid impressions, by Christian Taylor and Ian Ferguson.

Who’s holding a mixed bag?  Horatio promises a needed dimension of masterful, masculine support for Hamlet as cast with the focused, genteel Alex Organ. Hampered by the truncated Booth script, he spends most of his on stage time in shadowy background, a nearly silent lordlet-in-waiting for whatever, just lounging on the scenery. Does his Horatio even know Hamlet?  How would we know they are best friends, close confidantes from this portrayal? The character of Fortinbras with his appropriate resolution of untidy political disorder at play’s end is expunged from this version. Horatio never gets to ‘splain himself or nothin’ about his noble friend Hamlet’s motivations:  both the multi-talented Mr. Organ could have delivered with satisfying dramatic flair. One hug and the brief conjuring of angel flights hardly sufficeth….

Then there is Cameron Cobb’s portrayal of Prince Hamlet. One of the region’s brightest, most talented actors, brimming with creativity and resourcefulness, Cobb is a performer who can intrigue an audience and relay as much information with whisper or shoulder shrug as he can by declaiming up to the nosebleed seats with gestures proscenium broad.  He performs this Hamlet with incessant desperation through hyperactivity, as if he, the actor, realizes the script’s flat limitations. 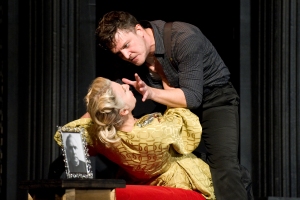 It’s up to him, alone, to keep the audience awake and engaged. Cobb’s Hamlet exhibits not the faintest whiff of introspection. Rather, he becomes the Charlie Sheen of Elsinore, clearly off his Prozac. Sure energizes the action during the fencing scene with Laertes. Cobb’s Hamlet, poisoned cut to the arm notwithstanding, could slay the entire company single-handed  and drag them all offstage like Polonius, before coming back to die onstage. What is with the Jacobean ruff he dons for the play within a play? And when was Velcro invented? During King Claudius’ contemplative solo chapel scene, Hamlet sneaks up behind the praying king and removes a pistol from an ankle holster, the loud rip of its Velcro closure reverberating clearly through his head mic. When he cocks the pistol with a resonant click, the only person at the venue who seems to miss both sounds is Claudius, kneeling ten feet in front of the not so silent prince. Destroys the sober impact of the moment, makes one wonder if King Claudius is deaf. There’s irony, considering how he poisons Hamlet’s father….

A key element of this play that eggs indecisive Hamlet on in revenging his father’s murder is the blatant lust between Claudius and Hamlet’s mother Gertrude, clearly scripted and usually highly physicalized. This version is the chastest depiction of Claudius and Gertrude’s “intimate” relationship I have witnessed to date. Do they share the same bedroom? They never fuel Hamlet’s disgust or rage with inappropriate display of “affection.” Again, T.A.Taylor and Constance Gold Parry are versatile, effective actors, quite capable of giving their characters full dimension. Not in this production, nor with this script.  Chris Hury as Laertes and Raphael Parry as Polonius fit right in with the tenor of the production, delivering their lines clearly, following their blocking with assurance, in a reserved, polite, mostly uninvolved way. Parry’s brief turn as the First Gravedigger provides welcome, if short-lived, comic distraction. He’s a charming character actor.

The Tragical History of Hamlet, Prince of Denmark, most likely written between 1599 and 1601, appeared in three versions. Shakespeare based his Hamlet on the legend of Amleth, preserved by 13th-century chronicler Saxo Grammaticus in his Gesta Danorum. According to the 18th century biographer Nicholas Rowe, William Shakespeare, actor, was “at the top of his own performance as the ghost of Hamlet’s father.” 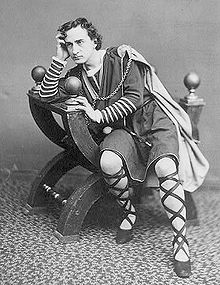 Photo of Edwin Booth as Hamlet from c. 1870. I could happily rip off his laced sandals and wrap the straps tightly around his throat for what he did to Shakespeare’s script. Very tightly.