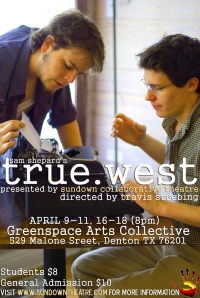 True West examines explosive, unresolved issues between two brothers over several days and nights, punctuated by two brief scenes with a Hollywood movie agent and the brothers’ mother. Since its premiere at San Francisco’s Magic Theatre where Shepard was the resident playwright, its lead actors have included Tommy Lee Jones, Peter Boyle, Gary Sinise, John Malkovich, James Belushi, Gary Cole, Erik Estrada, and Dennis and Randy Quaid. In 2000, Philip Seymour Hoffman and John C. Reilly played the leads in a Broadway revival, switching parts every so often during the run. Both were nominated for Tony Awards along with the play and its director Matthew Warchus.

Sundown Collaborative Theatre actors and director have taken on an estimable task in light of such company. Meaty roles like brothers Lee and Austin offer challenges to seasoned professionals, much less college students. The play is a director’s dream or nightmare, depending. Sundown Collaborative’s Cody Lucas (Austin) and Alex Worthington (Lee), along with director Travis Stuebing, meet the challenge head-on. The daunting balancing act is to maintain the rhythmic flow of the play while exploring dark and light, introspective and extroverted, sane and not so aspects of both characters. Lucas’ Austin seems so safe, so sensible, so responsible, at first; the audience immediately identifies with him as “normal” as they consider the monster-like idiosyncrasies and ignorant, cruel bluster of Worthington’s Lee. Playwright Shepard won’t let the audience settle easily. Comprehending this, Director Stuebing helps his actors sustain the fine-tuned realism required to create believable multi-faceted roles while avoiding simplistic good v. evil stereotypes. They connect, inspire each other only as brothers can, and ultimately escalate conflict into non-resolvable chaos. The disgust and horror response Worthington’s Lee engenders initially is equally matched by the disgust and horror evoked by Lucas’ Austin as his true character and motivation manifest in Act II. Blood will tell, as the saying goes. Sophisticated work by these under age 25 actors, they honor the exceedingly complex text well. I’d love to see them recreate the roles together in a decade.

Puzzlingly, the pivotal scenes with secondary actors could be much more convincing. Neither Karen MacIntyre as Mom nor Sean Ball as Saul dig deep into their characters, hardly seem to belong in the same play as Lucas and Worthington. Their scenes are meant to be revelatory and catalytic. The portrayals seem superficial, as though as actors they don’t understand why Shepard wrote them into the play. It doesn’t impede the tour de force effect of the brothers’ portrayals but does slightly weaken the overall performance.

Hard to create a play’s reality in an echo-prone, low-ceiling meeting room, with limited entrance/exit and lighting options, where the audience sits on folding chairs and an occasional church pew with obstructed views of onstage action. Performance art can overcome many logistical obstacles if the creative impulse sends it there. Sundown Collaborative Theatre creates an awesome artistic reality within the limitations of its space. In 2003, Wilson Milam mounted a lavish and updated production (including 20 working toasters) at the Bristol Old Vic. No expense spared. The first three rows of seats were removed “for fear that the audience would be harmed and a Perspex shield was installed for safety reasons”, preparing for the final showdown. I doubt the Bristol Old Vic created any more believable reality, no expense spared, than Denton’s Sundown Collaborative Theatre does with its gutsy, actor-based sparse production. Savagery can be so simple, done right….

Gut-wrenching pain and resentment, soul-deep and gunny-sacked for years, pervade this play and drive its characters to sub-human acts of desperation. Support these folks at Sundown Collaborative Theatre. Donate time and money- free pizza coupons, intermission refreshments and certificates to local thrift stores. (They’ll destroy a lot of furniture before the run’s end.) It’s okay. Their art’s in the right place.