Seize the day. Brighter than any star and living often in larger than life terms, barely into their twenties, the Greatest Generation possessed an intangible and incomparable grace. Courage, vision, honoring one’s word, a pro-active work ethic: they not only understood the importance of integrity and character, they seized every opportunity presented to live lives that would reflect well on future choices. They seemed to realize they were key players at a crucial moment in Western history—all civilization held its breath as these energetic young people shouldered enormous responsibilities and made sacrifices that would provide a much better, safer world for future generations. They would not let evil and repression flourish. They knew that things really worth having were worth waiting for, would be better cherished if cultivated slowly, with respect. So it would go when they strolled down the path of true love. 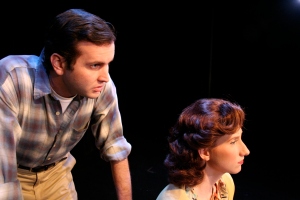 May and Raleigh view the future

Live this experience of innocent, hopeful Greatest Generation love blossoming into passionate commitment when May and Raleigh meet and stroll down that sometimes thorny path together. Lead characters in Arlene Hutton’s celebrated romantic comedy trio of plays The NIBROC Trilogy, playing currently at Theatre Three’s intimate space Theatre Too, they don’t just make you fall in love with them vicariously; you’ll want to host their wedding shower, attend the marriage vows and fete them at the reception. Echo Theatre mounted the trilogy earlier this year at Dallas’ eclectic Bath House Cultural Center, where it had such enthusiastic response from audiences, many of whom came back repeatedly and filled the houses to capacity, that it made sense to mount a second run where new audiences could find solace and delight in its homespun freshness.

Fresh? A WWII romance? Isn’t that stodgy and old-fashioned? Hutton’s play Last Train to NIBROC, the first of the trilogy, tingles with such vitality you can almost smell and taste the strawberries Raleigh mentions bringing to supper at his sweetheart May’s family’s home. How many plays make your senses come that alive? There’s magic in the vibrant, multi-faceted portrayals created by Morgan Justiss as May and Ian Sinclair as Raleigh. Assuredness, ease and focus mark their characterizations in this second mounting. Not that they gave superficial performances before, but now Justiss and Sinclair know every nuance of each other’s character like longtime friends. No reflective pause gets rushed; every high emotional moment peaks in delicate crescendo, revealing their mastery as performers, the guiding caress of Pam Myers-Morgan and Ellen Locy’s direction, and the considerable genius of Arlene Hutton’s script.

All three plays flow naturally, viewed in sequence; or they can be enjoyed seen alone. The characters are minutely detailed with complex relationships that function as believable catalysts for action that swells and falls with the poetic grace of Edward Albee’s works minus any savage motivations. These are real people, humble, decent folk; you find yourself caring about every one of them.  May, Raleigh, May’s optimistic mother Mrs. Gill, Raleigh’s cantankerous mother Mrs. Brummett, and his willful sister Treva who shifts everyone into the second half of the twentieth century at lightning speed; they become old friends instantly. It’s no accident they make such strong impressions.

Arlene Hutton knows her craft from the ground up. She started performing at age 8 in her home state of Kentucky and went on to earn an MFA at the prestigious Asolo Conservatory in Florida. From there she moved to New York, like so many aspiring performers, where she got daytime television and costuming gigs and eventually earned an Equity card.  Since that time she has taught, lectured, and thrived as a guest artist at over fifty respected universities, conferences and professional/ academic venues worldwide, as a director, actor and writer. Hutton was named the Tennessee Williams Playwriting Fellow at the University of the South in both 2005/2006 and 2007/2008. She fell into playwriting in 1994, frustrated by the lack of dynamic, worthwhile roles for women. She immersed herself in the creative process, participating in a transformational Lanford Wilson retreat that influenced her NIBROC series in development. She took her writing to the Edinburgh Fringe Festival four times before Last Train to NIBROC first graced the stage on a tiny, tucked-away venue at the 1996 Festival in a short one-act version with The Journey Company, with two people in its first audience. “When I first wrote about May and Raleigh, it never occurred to me that anyone would be interested in what seemed to be an old-fashioned romance. I never really expected the piece to be produced; it was just some dialogue rattling in my head, demanding to be put on paper, one of my first attempts at writing a play,” she explains. She modeled the two main characters on her parents and their experiences , drawn from Appalachian family lore. “The plot is fiction; the details are fact.” After multiple revisions flowing from intense creative immersion, the fully realized first leg of the trilogy premiered  at the  New York Fringe Festival in 1998. It returned to Edinburgh, with its original cast, and played in a large venue to sold out houses. The production then moved to Off-Broadway, where it received a prestigious Best Play nomination from the New York Drama League. Last Train to NIBROC has delighted audiences at more than one hundred productions worldwide, including at Fort Worth’s Circle Theatre in 2002.
After the first production’s success, Hutton realized the characters had a bigger story to tell. She wrote the character of Raleigh’s mother for a longtime friend who had supported the play’s development since its earliest fringe incarnation.  The second part of the trilogy, See Rock City, where May’s and Raleigh’s mothers join the young couple, began as a fifteen page ‘wedding scene’, and the characters got fleshed out with in depth exploration at improvisational workshops. With the help of a development grant, she added two more scenes and got to continue working with the original Journey Company actors for a full year of rehearsals and readings, an almost unheard of luxury. See Rock City finally came together at the Australian National Playwrights Conference in 2003. Hutton wrote and conducted workshops of the final play in the trilogy Gulf View Drive at the New Harmony Project. The complete trilogy premiered in Los Angeles and played Off-Broadway at the 78th Street Theatre Lab in 2007. It received unanimously positive reviews and was named Critics’ Choice by every major publication, including the LA Times. It received six LA Weekly Theatre Award nominations, including Best Playwriting.

This is your best chance to get aboard for Hutton’s triumphant trilogy, its “last train” in Dallas for a while. The Dallas cast includes some of the most versatile performers in the region: Kristin McCollum as Treva, Susan McMath Platt as Mrs. Brummett, Nancy Munger as Mrs. Gill and Morgan Justiss and Ian Sinclair as May and Raleigh. Echo Theatre founding/producing partners Ellen Locy and Pam Myers-Morgan direct. Come seize the day for May and Raleigh, with hope and honor, integrity and joy.  Step out of our complex difficult present day world; get inspired in NIBROC to seek a more positive future.

Catch the trilogy: Thursdays through Sundays through May 31 at Theatre Three’s Theatre Too, 2800 Routh Street in Dallas’ The Quadrangle.
Tickets: 214-871-3300, http://www.theatre3dallas.com