During the music-filled stage fantasy about a fan’s encounter with country/pop singer Patsy Cline, the fan reports Patsy told her: “I don’t want to get rich; I just want to live good.” Maybe Patsy Cline did make that remark, but there’s no question about her estate raking in substantial bucks based on audience attendance and response to Casa Manana’s Always, Patsy Cline running through June 7 at the venerable Ft. Worth venue. Casting film and TV star Sally Struthers as the fan doesn’t hurt either. 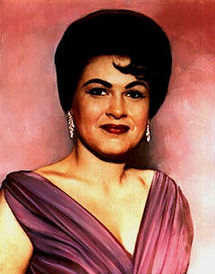 In addition to Ms. Struthers, the two-act performance features Julie Johnson as the iconic song-stylist. Ms. Johnson graduated from Austin College in Sherman and has had a distinguished career in film, concert and on stage, including on Broadway. Through the evening she sings twenty-seven numbers, some in their entirety. With not much to the show’s plot or dialogue, it’s crucial that the “Patsy” embody enough of the singer’s persona and unique vocal style and interpretation to thrill the audience and carry the show along. Johnson fills the bill. In stature, expression and song, Ms. Johnson offers a smooth, effective presentation, creating a believable Patsy Cline.  She inspires spontaneous applause and cheers with her soulful renditions of Cline’s classic repertoire: Crazy, Sweet Dreams, She’s Got You. The show also contains numbers primarily associated with other artists. Although Johnson sings them well, in clear Patsy Cline style, they feel slightly out of place, like filler. Johnson has performed the role of Patsy six times.

Sally Struthers has a charming delivery and strong stage presence, but she doesn’t seem well-suited to the role of Louise, the blue collar divorcee who develops a passion and eventual letter writing friendship with Cline. Antics and predictable shtick dominate the dialogue scenes – often appearing out of context and distracting. Occasionally she delivers what feels like a mechanical line reading, particularly when addressing the audience directly. Her selection of a “random” cowboy audience member to drag up on stage for a dance looked and felt downright phony. Johnson singing as Patsy got shoved aside, hardly fitting playwright Ted Swindley’s intentions. The audience guffawed, but the scene came off as awkward and staged, not spontaneous. Struthers’ costuming as Louise in no way flatters her, makes her look dwarf-like, freakish, with heavy hanging hair blocking much of her face. It’s not a convincing, comfortable performance from someone with a lifetime of sterling accomplishment including Emmy and Golden Globe Awards. Why is someone of Struthers’ caliber and background touring the  summer musical circuit in this role?

Accompaniment, adding much needed vitality to the production, is provided with panache and accuracy by a six-piece band: W. Brent Sawyer on piano/ conducting, James Aaron on steel guitar, Rex Bozarth on upright bass, Drew Lang on percussion, Gordon McCloud on fiddle/guitar and Kim Platko on guitar. They provide excellent back up to Julie Johnson’s superior singing.

Always, Patsy Cline is a nostalgia hit, pleasing to attend, but offering little substance. Its success indicates the depth and range of musical impact the singer had, in spite of her death in a plane crash at age 30 after a short six-year career span in the 60’s. Die-hard Patsy Cline fans will adore Julie Johnson in this production. Newbies will enjoy the music, the light-hearted banter and maybe become Patsy fans, as well. And the Cline estate? Makes out like a bandit.
Always, Patsy Cline runs through Sunday June 7 at Casa Manana in Ft. Worth.
Tickets: 817.332.2272 or http://www.casamanana.org/summer/patsy.html
http://www.casamanana.org