Can you spell PREDILECTION? That’s what the nearly full house audience demonstrated tonight at the opening of Theatre Three’s production of the Tony award winning, internationally produced, Broadway play turned musical OPUS The 25th Annual Putnam County Spelling Bee. They loved what they witnessed and gave it a rousing standing ovation at FINIS.

PREVARICATE: that’s what I’d be doing if I said I entirely concurred with the favorable assessment. While the merits of the production outshine its shortcomings, it has some issues that cause me CONSTERNATION. 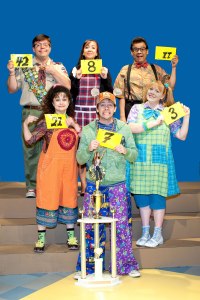 This musically demanding work awash with subterranean psychological complexity deals with the beneficial transformation that excelling in anything can cause in eccentric people who don’t “fit in” with the cool crowd, whether in a junior high classroom or at an office holiday party. The Spelling Bee setting creates the MILIEU for self-discovery. Contestants assume the roles of children but offer a more mature perspective; similarly, school staff managing the contest reveal more than professional mentoring demeanor. REVELATION of the transformational process takes place within the fourteen-fifteen musical numbers created by William Finn to accompany Rachel Sheinkin’s book, as in Stephen Sondheim’s OEUVRE. This musical seems deceptively easy to produce, a “kids’ show”. But it’s not.

The show’s youth-like VIGOR lends itself readily to a rushed pace. Director Bruce R. Coleman focuses his actors on maintaining the playground recess-like, buzzing tempo, making it difficult to understand words to some songs. That’s a problem when the songs carry much of the sense of the show. A CONCOMITANT result of the hurtling tempo, subtle, tender moments and depth of portrayal get sacrificed. Characterization becomes CARICATURE. With a few exceptions (Alexandra Valle as Marcy and Chad Peterson as Leaf) there isn’t much going on here below the surface.

What’s with humor based on putting people down for their IDIOSYNCRACIES or differences from perceived “norms”?  I heard and watched people all around me cackling with glee at the scripted jokes while I winced at the pervasive sarcasm and poor taste ribbing based on culture/ ethnicity/ pedophilia/ domestic abuse/ religious and sexual orientation. (Define guacamole: Guacamole is Mexican pudding). Why is that funny? If that’s your kind of humor, this is the show for you.