She defies definition and breaks the rules. She’s a real live wire with an abundant, overactive imagination. Too big for her britches? Definitely. Junie B. Jones is a vibrant character with charm and energy to burn, and kids love watching her get herself into scrapes and back out again. Unscathed! 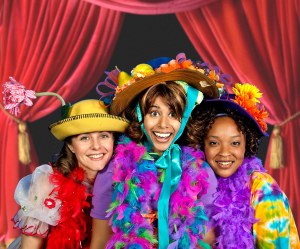 Regional theatre audiences are fortunate to have one of the nation’s top-rated children’s theatre companies based here in Dallas. The company’s production of Junie B. Jones & A Little Monkey Business is a stellar example of why the National Endowment for the Arts selected Dallas Children’s Theatre as the only North Texas theatre company to receive a 2009 grant from the American Recovery and Reinvestment Act. The show is a non-stop delight for both young and old. Based on the beloved 1992 children’s book series by Barbara Park, with book, music and lyrics by Joan Cushing, DCT’s Junie B. Jones & A Little Monkey Business follows the intrepid kindergartener through ten musical numbers and a snappy story line. Depicting the arrival of a little brother for Junie, a cast of six adults, some playing multiple characters, creates the world she inhabits and helps her find a way to accept the newest family member with enthusiasm, not dismay.

Recent University of Calgary graduate Jessica Jain infuses the main character with a natural wonder and sweetness that balances her signature hyper-physicality and outrageous ideas. Her clear, strong voice soars with earnest emotion and holds focus start to finish. Lisa Schreiner, DCT’s PR director, enlivens the dual roles of Junie’s very expectant mother (oblivious to her daughter’s concerns) and Junie’s wealthy kindergarten friend Lucille, the ultimate Miss Priss. She is so outrageously funny as the snobby, self-centered Lucille who sings with a swooping quivery vibrato, kids watching her had tears running down their faces they were laughing so hard. Chad Patrick Smith switches effortlessly between the roles of Junie’s classroom nemesis “Meanie Jim” and that of Junie’s kindly, supportive Grandpa. The rest of the cast forms a crisp professional ensemble, and includes Ashley S. Duplechain, Deborah Brown and Karl Schaeffer (DCT Artist in Residence) in a triple-hitting combo of roles. Knitting it all handily together under the able direction and choreography of Nancy Schaeffer (DCT’s education director) are award-winning set designer Randel Wright and lighting designer Linda Blasé, regional musical director, orchestrator and composer Adam C. Wright, and long-time professional costume designer (stage and film) Leila Heise. They all make it look so easy to pull a fast-paced, complex show like this together. Sit back and enjoy the magic they create from an adult perspective and appreciate how much enjoyment DCT’s Junie B. Jones & A Little Monkey Business brings to young audiences. Suitable for ages 5 and up.

Runs Fridays, Saturdays and Sundays through November 1, 2009 in the Baker Theater at DCT’s Rosewood Center for Family Arts. Tickets: 214-740-0051 http://www.dtc.org