The 2009 Bioneers Conference bumped Rachel Carson to the back of the bus, a puzzling faux pas. It relegated the award-winning film A Sense of Wonder, adapted from acclaimed actor Kaiulani Lee’s internationally celebrated one woman play about Rachel Carson (mother/catalyst of the modern environmental movement) to  last day screening at its 20th annual eco-conference in Marin County, California. The showing of this much-lauded film, subject of a Bill Moyers Journal on PBS program, was buried amidst a handful of “break out sessions” on the final day, late Sunday afternoon, when many of the event’s several thousand participants had already packed it in for the year and headed home. Maybe twenty people attended the screening. The Q & A session following, with playwright/actor Lee in attendance, clearly puzzled her (used to performing the live version to packed, enthusiastic houses of 1000 and up). Irony emerged upon reviewing the Bioneers 2009 “Moving Image Festival” schedule—on opening night, Friday Oct. 16, the conference featured films A Sea Change and Witness to Hiroshima in the Rachel Carson Tent at the Marin Convention Center Grounds. Not intending to denigrate those worthy films, it would have honored the environmental movement better as well as the memory of the tent’s namesake to feature the film about her in this time slot at the start of the conference, in her own tent, when more people would/could have attended. We need to understand where we came from in order to comprehend where we are in order to plan where we need to go. Rachel Carson, as definitively portrayed in the play turned film, is living proof of what one person can accomplish, a “mere” woman no less, in a male-dominated movement. Unfortunate placement, surely unintentional? 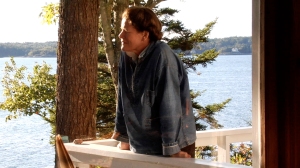 It’s 1962. What we watch at first on screen, documentary-style (Act I of the stage play) is a strong-willed woman struggling with packing her belongings to leave her beloved seaside Maine cottage for what may be the final time, to return to city life, publishing deadlines and the rigors of breast cancer treatment. Through Kaiulani Lee’s masterful, inward-drawn portrayal, Carson emerges as a principled, articulate, analytical woman with dry wit and enormous compassion for all living beings. In no way deifying Carson, Lee shows us a real woman who suffers, worries about her adopted son’s future, feels frustration with the perversity and cruelty of others and places huge demands upon herself to speak truth and fight for the rights of nature. “The aim of science is to discover and illuminate truth, the same with literature.”

In Act II, set two months later, Carson paces her office in Maryland, anguished yet determined. The publication of Silent Spring, causing a huge uproar, has thrust this very private woman into full public debate over its dire conclusions. She finds herself engaged in full battle with the nation’s leading chemical companies and government regulatory agencies, willing to do anything to discredit her and prevent her from getting her wake-up message to Congress and the US populace. The press hounds her. Requests to address universities and scientific conferences flood in. And her health is deteriorating. Rachel Carson fights on.

No dry eye left in the tiny Bioneers audience. Lee’s portrayal of Carson is so vivid and real, all watching want to reach through the screen to take her by the hand and reassure her, “We’re with you, Rachel, we’ve got your back.” In 1962, when Carson fought her brave battle to expose the devastation of pollution and won, hardly anyone knew there was a war to wage, much less a paradigm to shift. The film’s final image leaves the audience filled with awe, at both Carson’s accomplishments and Kaiulani Lee’s breathtaking performance. Believe in the impossible and act; follow Carson’s no nonsense lead, so lovingly nurtured by Lee. The birth of a movement.

A Sense of Wonder, the stage play, written by and featuring Kaiulani Lee, has toured the United States, Canada, England, Italy and Japan for sixteen years. It has been the centerpiece performance of major educational, environmental, journalism and conservation conferences. The Broadway award nominated Lee brings over thirty-five years of stage, film and television experience to her depiction of Rachel Carson and has been awarded an honorary doctorate by Bowdoin College for her distinguished contribution to performing arts. In 2007 Kaiulani Lee appeared as Rachel Carson on Capitol Hill, where she performed the play for Congress.

The film adaptation, A Sense of Wonder, directed by Christopher Monger, was shot in HD by Oscar-winning cinematographer Haskell Wexler at Carson’s cottage on the coast of Maine. Since its premiere tour in March 2009, the film has shown so far to well over 10,000 people in more than 175 cities from Mexico to Canada.

The yearly Bioneers Conference co-founders describe their three-day event with pre and post-conference day long eco-seminars as “the network of networks of visionary innovators with breathtaking solutions to restore people and planet.” Too bad so few 2009 Conference attendees had the chance to gain insight and inspiration from A Sense of Wonder.

To learn about the film and play, go to http://www.asenseofwonderfilm.com/

To learn about the Bioneers and the yearly environmental conference:  http://www.bioneers.org/