The show begins in complete darkness, silence. When the curtain rises, a simple wooden cradle rests upstage on a small raised platform strewn with straw. The women enter, slowly, decisively, tall and short, clad in colorful, flowing robes reflecting their African–American heritage; and their music inhabits the space. “Go Tell It on the Mountain.” Earth-born elegance. Incandescent artistry. Celebratory, heart-pounding rhythms drawn from classical to gospel repertoire. Looking for a unique way to honor the spirit of the season and community-driven, superior performance art, too?  Langston Hughes’ Black Nativity provides that magic. 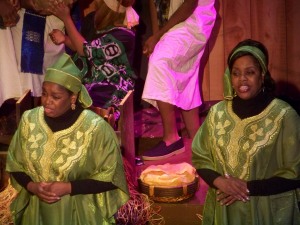 “My seeking has been to explain and illuminate the Negro condition in America and obliquely that of all human kind.” Langston Hughes

Adjacent to the Bishop Arts District in Oak Cliff sits a first-class, unassuming performance venue that entertains, educates and serves over 15,000 children, adults and thespian artists every year with cultural relevance and diversity. Through December 19, TeCo Theatrical Productions at the Bishop Arts Theater Center presents African-American poet, activist and playwright Langston Hughes’ retelling of the Nativity story, Black Nativity.  He incorporates traditional Christmas hymns, all interpreted in Gospel style. When the show was first performed on Broadway on December 11, 1961, it was one of the first plays written by an African-American to appear there. And it featured 160 performers arranged by age group and vocal range, with full orchestration

In TeCo’s production, a smaller cast fills the stage with their remarkable classically trained voices and fine acting presence. Included in the ensemble of eleven performers are the members of the acclaimed New Arts Six ensemble, including their director as play narrator.  This unique collaborative of classically schooled women artists focuses on producing original musical/theatrical works and utilizes Spirituals to musically record history and folk tradition. What a rare opportunity to see New Arts Six employ the full range of their diversity of talents in performing Hughes’ breathtaking two-act masterpiece.

This minimalist production may not be what Langston Hughes originally envisioned, but it captures and distills the majesty and musical eloquence of his work in a way he would surely approve of. Hughes is one of the earliest innovators of jazz poetry as art form and is best known for his work during the Harlem Renaissance. In 1960, the NAACP awarded Hughes the Spingarn Medal for distinguished achievements by an African American. In 1961 Hughes was inducted into the National Institute of Arts and Letters, and in 1963 Howard University awarded him an honorary doctorate. If you see no other holiday performance this season, you owe it to yourself to attend this rich, reverent, inspired, magnificent production of Hughes’ work. Through December 19th.

Tickets for Black Nativity by Langston Hughes are $15 in advance and $20 at the door, reserved seating. Showtime starts at 8:00 p.m. on Friday and Saturday nights and 3:00 PM Sunday matinees.

The Bishop Arts Center is located at 215 South Tyler Street in Oak Cliff.