Oh, look! It’s an unmarked warehouse garage theatre on a back alley in Grapevine, replete with chirping crickets under foot and dive-bombing moths. Don’t tune out, please!

Before you point the Lexus to the underground parking of some looming,sterile glass and concrete edifice next to major freeways, consider this:  you might be in for a real treat – essential, energized performance, stripped bare of state of the art lighting effects, sliding back walls and valet parking, but replete with fully-committed acting and singing – in a quaintly rustic community-based setting. It’s Ohlook Performing Arts Center’s [title of show], closing August 13, playing to gregarious, enthused capacity crowds since June 22. This reviewer wishes she’d heard about it sooner to post her review early. And that she had photos to post.

Anybody remember 1973 when a unknown rough-edged rock band named Dr. Hook & The Medicine Show recorded a Shel Silverstein tune satirizing the sleazy ins and outs of the music biz, “The Cover of the Rolling Stone”?

In spite of its playful lament about not getting featured on Rolling Stone Magazine’s cover, it hit #6 on the US pop charts, and ultimately earned the group its magazine cover, in caricature. Funny stuff. American chutzpah paid off.

Watching Ohlook’s earnest, hyper-kinetic, bright, charming cast of four singing their hearts out bringing this Jeff Bowen/ Hunter Bell Tony-nominated Broadway success to life reminded me of the 1973 feat. It’s basically a parallel story line. Two aspiring New York performer/writers enter a musical theatre contest with a hodge-podge “show” about trying to write a Broadway-bound show with two female buddies. Their show, named [title of show] because they can’t think of anything else to call it, gets selected for performance at a regional festival and ends up on Broadway. No joke. No great orchestrated music, no smoke and mirrors or crashing chandeliers, a little gratuitous nudity, sprinklings of the f word, lots of sincere charm and pure, unadulterated guts. It’s great fun and the perfect venture for Ohlook’s bare bones black box style setting (the flying bugs add earthy atmosphere). The audience is so up close and personal with the performers, it feels like they’re helping them write the show. In a larger, more formal theatre setting the show can lose its personal warmth and verve. It’s saucy; it’s spicy; it’s nervy; it’s young people spouting a rich, modern vernacular while contemplating fifty years’ worth of musical theatre, some winners, some losers, and scraping up the guts as a friendly foursome to put one together, themselves, that makes it to the big-time. Wish I had photos to post, sigh.

Ohlook’s performance team more than does this quirky trifle justice. UNT Opera PhD student and show director Jay Gardner appropriately focuses his youthful actor/singers on the believability of performance while not bearing down too heavily on the music. While all four sing adequately for the show’s needs, their ensemble acting and comic timing are what make their performance a true delight. The audience is 100% with them, clapping and cheering spontaneously throughout the evening. Deft accompaniment on keyboards by musical director James McQuillen, who tosses off the occasional dry, humorous aside, keeps everything zipping right along. 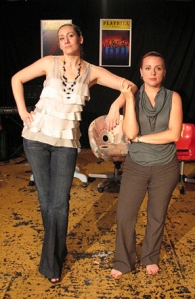 Last performance is Friday August 13 at 10:30 pm. That’s correct; it’s not an early show. Ohlook Performing Arts Center is located at 316 S. Barton St., one block west of Main Street in Grapevine. Their website is www.ohlookperform.com, with no map or directions on it. Call 817-421-2825, if you get lost.

About [title of show] on Wikipedia: “[title of show] was first seen in 2004, including at the New York Musical Theatre Festival in New York City. After a few other performances, it ran off-Broadway at the Vineyard Theatre in 2006, earning a second limited run the same year. It played at Broadway’s Lyceum Theatre in 2008 for 13 previews and 102 regular performances, closing on October 12, 2008. The writer-stars, Bowen and Bell, as well as director Michael Berresse all won Obie Awards for their work on the off-Broadway production, and Bell was nominated for a Tony Award for Best Book for the show but did not win.”