Ancient stoics viewed sages as individuals with the ability to rise above the human condition, not seeking love or wisdom because they accepted love in its purest state and were already inherently wise. 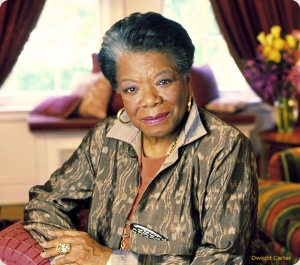 Their happiness wasn’t derived from the external trappings of life that most seek like wealth, adoration, success, fame, and glory but in the intangible of happiness as a virtue for abundant living.

As a medicinal herb, Salvia officinalis or sage is reported to have many healing properties, including enhancing one’s memory, serving as a powerful antioxidant, lowering blood sugar, relieving stress and depression, alleviating allergies, promoting oral health, and easing common cold and flu symptoms.

Renowned chefs and cooks applaud sage as an herb with the ability to hold its own for long cooking periods with its slightly bitter yet peppery taste. Fall holiday dishes like mom’s famous stuffing or dressing just wouldn’t be the same without the presence of sage.

The same can be said about Dr. Maya Angelou, a resilient Renaissance woman and American treasure who list among her many attributes: poet laureate at the 1993 presidential inauguration, Pulitzer Prize and National Book Award nominee, Grammy award winner, educator, historian, playwright, performing artist, civil-rights activist, and one of the most prolific best-selling authors of contemporary literature.

In a recent visit to Dallas as the first speaker for the 2011 NasherSALON series on Thursday,  January 13, and again at Barnes & Noble – Lincoln Park in the Northpark Shopping Center area, Dr. Angelou delivered juicy tidbits of wisdom and gratitude as she signed copies of and healthy living through her latest literary project, Great Food, All Day Long: Cook Splendidly, Eat Smart.

The NasherSALON series, presented by the Nasher Sculpture Center, spotlights international acclaimed guest lecturers whose work in a variety of artistic fields have legitimately earned them the title of American Legend.

Gracefully wearing her diminutive frame as though it was among her oldest and most prized possessions, Dr. Angelou displayed a youthful vitality much younger than her actual age. As she smiled and laughed with the beautiful rainbow coalition of more than 300 men, women and children assembled, one couldn’t help but feel as though Angelou was presiding over the standing room crowd as its elder stateswoman.

One patron, a white man who had driven several hours with his wife, a Latino woman, could barely contain his excitement as he shared with Dr. Angelou their determination to meet her. A young black girl cried upon learning she wouldn’t be able to an autograph, only to have her joy restored after Dr. Safisha Hill, director of Act of Change Institute of Cultural Arts was able to secure a poster of Angelou at the conclusion of the event.

It was her final remarks however that firmly cements Angelou as a true ambassador of humanity. Speaking in a more decided tone, Angelou reminded the audience:

Works by Angelou include Still I Rise, All God’s Children Need Traveling Shoes, A Song Flung Up To Heaven, Phenomenal Woman, Singin’ and Swingin’ and Getting’ Merry Like Christmas, Gather Together In My Name, I Shall Not Be Moved, Letter To My Daughter, and her signature novel, I Know Why The Caged Bird Sings.

The Act of Change, Inc., Institute of Cultural Arts