North Texas’ iconic Horton Foote Festival established itself on solid ground this past two weekends with entirely different productions opening at Stage West in Fort Worth and at the Dallas Theater Center’s Wyly Theatre.

Running the full gamut from intimate to epic, these productions demonstrate eloquently why Foote’s work is worthy of a celebration festival of staging. His voice resonates with a unique, clearly defined style; his socio-political observations ring true with contemporary relevance; his characters intrigue and enchant; he presents slice of life historical perspectives with tactile immediacy. Chekhovian in style with more action off stage than on, Foote’s two works don’t trudge ponderously through their first acts, locked in tedious exposition. Horton Foote strides right to the heart of the matter.

The Horton Foote steam engine chugs its inaugural run out of Stage West’s station with Talking Pictures, offering a leisurely panorama of 1929 life in provincial Harrison, Texas. The play’s initial conversations concern attendance at Baptist and Methodist churches, with characters wondering if mixed marriages between denominations are appropriate and which one Jesus attends.

Meanwhile, the modern world, represented by “talking pictures”, is about to run over silent movies with tsunami vigor, sweeping everyone along head first into the eddying undertow of cosmopolitan 20th century life. Nobody sees the paradigm shift’s approach; they lead simple lives one leisurely, demarcated day at a time. Sound quaint and folksy? Absolutely, but brim-full of honest, decent people whose aspirations and failings, dreams and disasters, seem not unlike many experienced in 2011.

Jim Covault directs a polished ensemble with a light, sure touch. The timing, conversational pace, how each actor carries him or herself in detailed period costume (Michael Robinson design) are all as faithfully orchestrated to belong to the era as a beloved hymn’s verses might be carefully inscribed in play matriarch Mrs. Jackson’s family Bible. Hard to believe Talking Pictures’ first emerged in the late 1980’s it feels so grounded in the 1920’s, attesting to Stage West’s accurate execution.

Dana Schultes creates Myra, a tender, restrained heroine, and a resolute “grass widow”, scrabbling hard to make a life for teen son Pete. Dillon Vineyard’s Pete struggles credibly with his loyalty to his work-worn mother as his alcoholic father attempts to lure him to a more exciting life in Houston. Schultes and Vineyard convey their close relationship without cloying, overt demonstration. A simple glance, an empathetic silence, the sparse dialogue playwright Foote affords them, all give ample opportunity to define a loving bond, 1929 style. 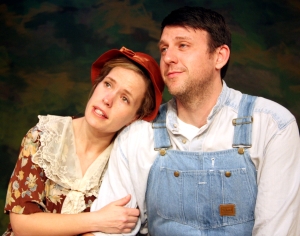 Schultes plays Myra’s courtship scenes with shy suitor Willis equally well, maintaining 1929 decorum. Thomas Ward presents a kind-hearted Willis, a working-class man of few words who aches for romance but honors propriety and knows his limitations. He kisses his bride-to-be only after their engagement is a sure thing. One never doubts his Willis’ integrity, or his longing.

On a resplendent, soaring set (John Argonne design, lights and sound by Matthew Richards and Bruce Richardson) utilizing the Wily Theatre’s thrust configuration to its best advantage with graceful ecru and grey-hued columns looming over each scene, Dallas Theater Center embraces the epic dramatic in Horton Foote. The estate, itself, presents the most powerful presence in 2007’s updated Dividing the Estate, dominating the action and feeding into the bitter disputes that consume the play’s relationships, an insidious Leviathan. Desperate discord, strident, savage and relentless, remains dwarfed by the overpowering reality of “the estate” and its dominion, no matter how violently the characters struggle to free themselves. The verse, “the sins of the fathers…” comes to mind as the play unfolds. Not flowing as seamlessly from Act One to Two as Stage West’s Talking Pictures, it presents a riveting evening of theater nevertheless.

Director Joel Ferrell assembled a masterful cast of players to bring this work to life, at operatic pitch. June Squibb owns the stage as matriarch Stella, an iron-willed queen bee, presiding with cane and glass of iced tea near at hand. She moves naturally from barking orders to her fawning family to patiently reminiscing over old times with her ancient retainer Doug, a game, aging dowager holding court for the last time. Akin Habitude as age 90 something Doug manipulates the family and other servants with spirited calculation, a sly dotage. Doug is a marvel of emotional arc: yelling, pouting, sprawling across the floor, recalling key childhood memories with delighted wonder at inopportune times and finally passing on while seated center stage on the family sofa. Foote offers a kaleidoscopic acting challenge to any actor worth his mettle with this role. It affords Habitude the opportunity to utilize his rich voice, dynamic presence and resourceful acting skills to the max. Nance Williamson and Gail Conquer face off exquisitely as strident sibling chips off Stella’s block, Mary Jo and Lucille. Each’s strengths and weaknesses seem to bring out the worst in each other while lashing them tighter together, moths flame-drawn. They stalk the stage expanse, sortie and retreat, mother cougars guarding their lairs. The men of the family in Dividing the Estate appear peripheral, ineffectual. Just as sibling women Mary Jo and Lucille exude adversarial strength, male family members emanate weakness and reticence.

As Stella’s grandson Son, Matthew Gray plods dutifully along, never rocking the boat or bucking his grandmother’s wishes until near the play’s end. Family black sheep Lewis inspires blood-curdling ire and exasperation from everyone with his narcissism and booze-enhanced self-pity. Elegant Kurt Rhoads interjects emotional perspective and a hint of playwright’s conscience while managing to look perpetually adrift, bloated and unkempt, an interesting acting feat. As Mary Jo’s smarmy real estate speculator husband Bob, Kieran Connolly exhibits all the integrity of an unrepentant Enron executive with faux-sophistication and barely masked disdain. Liz Mikel and Tiffany Mann bring their solid performance skills to their smaller roles as family servants without much chance to demonstrate range or scope.

That leaves the four younger women roles, where I have problems with this play and/or production.

Two roles are family members, Mary Jo’s daughters. What age are they supposed to be? They dress and behave like spoiled, immature teenyboppers from the 1980’s; yet one is divorced and the other about to marry? Other characters in the play act age appropriately and seem to belong in the 1970’s by their style and attire (inspiring lively debate about the play’s and production’s intended time period at the after opening night party). The daughters have little function beyond decorative annoyance in the play. Why are they in it? Dividing the Estate first appeared in 1989. Were these characters changed from the first version or added as afterthought for the current script? They don’t exist on the same scale as the play’s other characters, hardly seem to belong in the same play.

The other two young women, Son’s teacher fiancée and Lewis’ under-age love interest function as sit-com-like comic relief and don’t resonate on the grand scope of the other family members, either. The four roles feel “tacked on.” No fault of the young actresses playing the characters, who all bring sincerity and confidence to their stage work – their roles just don’t seem to fit the play’s scale, as written.

Dividing the Estate remains an intriguing stage work. Dallas Theater Center should be proud of its outstanding entry in the Foote Festival, its director Joel Ferrell, and its exemplary ensemble of actors and designers who give it life.