Mount a region-wide performance festival honoring the diversity and depth of a native Texan, national playwright’s oeuvre? What a fantastic undertaking in cooperation and arts advocacy. 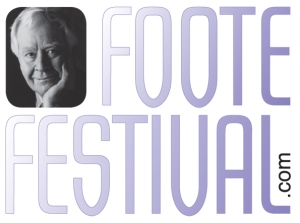 I applaud the endeavor undertaken in north Texas with the Horton Foote Festival and hope the theater companies involved will work together again on similar projects.  Amazing strength found in linked creative energy.

Given what I’ve seen so far, I generally find Horton Foote’s plays less than inspired or inspirational. I was never asked to study them or perform them in college; I wondered why. They lack the poetry, depth of passion or memorable characterization of truly great text. The intense, focused productions I’ve seen in the north Texas region stretch Foote’s works’ seams to bursting in sincere attempt to elevate them. They would make for a pleasant afternoon’s reading, more than vital, energized performance. Two evocative lines from any Tennessee Williams’ play capture my imagination and transport me farther in ways the entire body of Foote’s work I have seen so far does.

WaterTower Theatre: Often producing some of the most professional theatre in the region under the guidance of a bold creative team, WaterTower Theatre presents a tepid, uneven, amateurish The Traveling Lady in spite of a divine set design. It lacks unified vision, attention to acting detail, or over-arching period synchronicity between design elements. Acting — static, indicative and unconvincing at best in stronger moments — strains belief and tries the audience’s patience with soap opera style histrionics, particularly in scenes tacked on from outside sources. 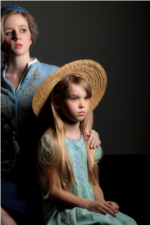 This show, as directed, would have had equal impact as a staged reading or recorded for broadcast given the cast’s lack of spatial engagement. Can’t and won’t blame actors for following unimaginative direction.

Examples of what doesn’t work? The show’s child character, played double cast by Vivian Blakeley or Aubrey Rose Hansen, climbs onto a platform behind a looming upstage flat cut out of a chinaberry tree. Only her legs below the thigh are visible. She marches in place on the platform for some time, supposedly to indicate “tree-climbing”? It’s a silly, distracting, unbelievable action. Major problems hamstring lead character Georgette, the play’s protagonist and namesake, played with total absence of any 1950’s period sensibility by Misty Venters. The text reveals that Georgette has kept herself and daughter barely afloat for years, while she worked at whatever job she could find to fund getting her incorrigible husband out of prison. She tells us that she has just walked many miles on country roads in the heat with her young child in tow, in hope of finding housing. There is nothing in Venters’ performance that indicates any emotional or physical exhaustion or the slightest hint of circumstantial desperation. A talented actor with strong contemporary sensibility, Venters communicates by her casual carriage and ease of action that she is not wearing, nor has rehearsed with, any semblance of a 50’s era girdle, garter belt or tight under-wire brassiere, all of which would impact her freedom of movement and escalate her exhaustion after a lengthy, hot hike. Venters seems oblivious to her character Georgette’s physical and emotional reality, as directed. Her costume makes things worse.

Award-winning, seasoned costume designer Robin Armstrong attired Georgette in an elegant eggshell blue frock with frilly petticoat and ladylike white pumps, suitable for a summer cotillion pool party or elegant cocktail soiree. Fresh as a daisy, not a hair out of place, no wrinkles, no worn, torn or patched places, no dust, so very upper class. Except. Could Georgette really afford such fancy clothes? And how could an expensive-looking, feminine frock and white pumps remain immaculate and intact after all those weary miles? Her daughter is equally over-dressed, just as out of place in their dire circumstance. Neither belong to this play.  Venters never inhabits the gutsy, hard-working, devoted woman she is cast to portray with any credibility. She looks uncomfortably awkward slinging a ladies’ handbag over her shoulder and striding aggressively across the stage (in the 50’s?). It doesn’t really matter what the other characters do. The protagonist carries, or buries, this show.

Kitchen Dog Theater: Kitchen Dog artists commit themselves to exploring life experiences that challenge conventional perception through performing classical, contemporary and new works in ways that honor the integrity of authorship while fostering current relevance. Following this mission, the company selected three intimate, thought-provoking, dark-hued one acts by Horton Foote that reveal Foote’s wide range of style and technique, all set in the fictional hamlet of Harrison, Texas. Blind Date and The One-Armed Man take place in 1928, and The Man Who Climbed Pecan Trees in 1938. Stylized yet naturalistic, the three-pronged production creates an intriguing evening of quality, satisfying, effective stage performance. 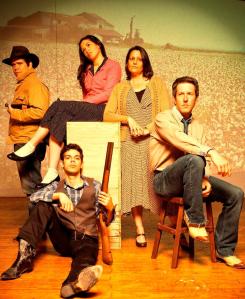 Three directors – Karen Parrish, Jonathan Taylor and Christina Vela – work with a versatile repertory cast of five – Chris Hury, Shelley Tharp-Payton, Liza Marie Gonzalez, Joey Folsom and Mike Schraeder – to define the unique worlds of each one act while exploring the common resonances of the human condition expressed by all. Scenic designer Cindy Ernst provides a simple, sparsely furnished set shared by all three pieces within Kitchen Dog’s intimate theater playing space. Integrated with and framed on three sides by a muslin backdrop mural, wash-painted to reflect the Texas sky overlaid with line drawings of Harrison TX townsfolk, the stark simplicity of the set design reinforces focus on texts and characters, front and center. Curious, poignant slices of life, each one act reveals hopes and fears, the bitterness of disappointment mixed with intensity of family emotion ranging from motherly love to brotherly exasperation and the serious consequences of loss, told from differing perspectives. Watching each one act feels like reading a short story that springs to vivid life in the mind’s eye. Kitchen Dog’s theatrical experience evokes an immersive, dreamlike quality that capitalizes upon the strong narrative aspects of Foote’s work. They end so quickly, entrance enough to merit expansion.

Thanks to the tight-knit professionalism and skilled interpretations of the ensemble under able directorial guidance, the performances exhibit a seamless quality, interlaced by the three directors’ visions. Chris Hury anchors all three plays with effortless command and grace. He smoothly draw audiences into each tale with clearly defined characters, whether he provides comic background, inspires murder or wallows in self-pity. Ever malleable Joey Folsom charms the audience in Blind Date as an unwilling, uncouth, but sympathetic suitor, then calls forth horror and revulsion as desperate, maimed Ned in The One-Armed Man. Mike Schraeder creates a memorable, heart-wrenching portrayal of a weak man undergoing total mental and emotional breakdown in The Man Who Climbed Pecan Trees; Liza Marie Gonzalez both goads and recoils from his expanding imbalance with detailed physicality and emotional veracity. She makes a perfect shrewish, unexpected “match” for Folsom’s boorish suitor in Blind Date. Shelley Tharp-Payton attacks her challenging nuanced roles with resilient sustain, believable as the annoyingly determined, self-absorbed matchmaker in Blind Date and relentlessly buoyant as the long-suffering, nostalgia-consumed, unstable mother in The Man Who Climbed Pecan Trees. The combined effect of all three one acts’ themes is hardly uplifting. Yet the entire evening is a superbly faithful, accessible rendering of some of Foote’s darkest writing. The “3 Foote” evening at Kitchen Dog Theater celebrates Horton Foote’s work with honest, artistic simplicity. It’s the best Foote forward yet.