After all, most women – frivolous, vain, superficial creatures that they are – exist simply as purely decorative amusement for men’s fickle carnal desire, waste lots of money on uncomfortable shoes and lingerie and worry non-stop about selecting the proper shades of lipstick and fingernail polish, right? 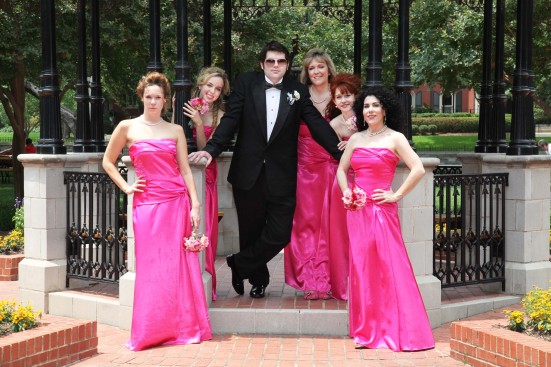 Alan Ball’s cleverly formulated divertissement Five Women Wearing the Same Dress, in performance at Contemporary Theatre of Dallas through July 10, portrays a behind-the-scenes comic view of a modern Knoxville, Tennessee society wedding from the viewpoints of five very different bridesmaids who escape to the bride’s younger sister’s bedroom during the home estate reception.

“Why are men so stupid? Because they’re allowed to be.”

Mr. Ball presumably made a huge pile of money for himself, his agent and commercial product sponsors as the creator/producer of HBO’s “Six Feet Under” and “True Blood” (means nothing to me as I don’t own a television and pay no attention to MSM marketing). This qualifies him to write plays. He exhibits considerable acumen in creating recognizable female ‘types’ that follow predictable arcs and slightly scandalous dialogue guaranteed to inspire chuckles (with or without a laugh-track) but not offend anyone too, too much. He touches on big, painful subjects without allowing them enough time or depth to interfere with the laughs, like dipping a big toe in a swimming pool without getting one’s designer linen culottes damp or mussed. It’s all very sophisto-haha but somehow disingenuously discomfiting at the same time. Alcohol and drug abuse, child molestation, Lesbian stereotypes and discrimination, weight, age and beauty obsession, codependency, marital infidelity and dysfunction, Christian cult repression, AIDS, promiscuity: all are dealt with like Mrs. Baird’s white bread slices lined up neatly in a toaster. Each subject gets its thirty seconds’ worth of focus before Ball rushes on to the next hilarious, fiber-less slice. How funny.

“Any woman who chooses marriage in this day and age is out of her f***ing mind.”

CTD engaged one of the region’s most distinguished stage directors to helm this show, Susan Sargeant. Sargeant has performed a masterful feat here, both in her treatment of the less than substantial material and in her casting of the five women. In the war waged between Ball’s script and a canny director with a sterling cast, the latter takes the prize. In spite of itself, this play comes off as a highly amusing, sometimes poignant, thought-provoking production. Each woman cast is an exceptional actor in her own right. Every glib entrance manages to get transformed with genuine theatrical spark. At different times, actors who have the skill, courage and chops to plunge deep into the abyss of human relational suffering teeter precariously on the edge of turning Ball’s play into something more consequential than clearly intended. 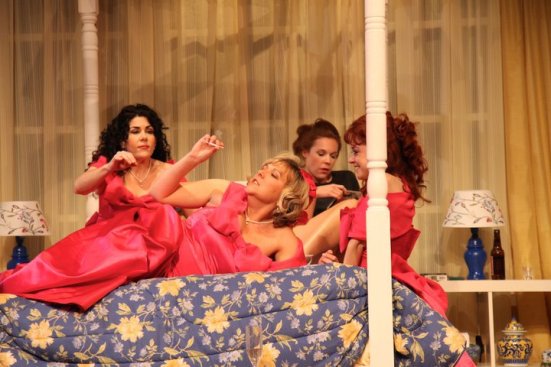 Smart, honorable director Sargeant holds her actors back and honors the intent of the piece as written, while allowing the audience to wonder, what if…. It was intriguing to watch the well-integrated art and craft at work and the cast’s barely contained instincts to plumb deeper. Kudos to Heather Sims, Catherine DuBord, Emily Scott Banks, Catherine Wall and Barrett Nash for their wickedly luscious performances while wearing such cumbersome, hideously unflattering, popsicle-hued bridesmaid attire.

“There is a certain amount of freedom in letting your tits fly.”

Annell Brodeur’s costumes are as garish and bizarre on every shape and size woman onstage as they are completely effective at showing the simpering ridiculousness of the matching bridesmaid attire custom. A perfectly appointed, tastefully “sweet” bedroom (right out of pretentious Highland Park or McMansion-ed Frisco) with huge four-poster bed upstage center offers ample playing area for the gals to storm, stagger, weep, hurtle and romp across (Clare Floyd DeVries). So smug uppa crust yummy and just begging for a divine dose of disrespect.In the time it’s taken you to read this review, literally thousands of women and girl children around the world have been denied access to care or shelter, beaten, burned, blinded, genitally mutilated, raped, starved, and killed for – being female. They may as well all be wearing the same dress, or burka, or whatever. If art holds up a mirror to life, Alan Ball’s play represents no more than a miniscule sliver of the glass, reflecting a life of Western privilege so easily taken for granted while trivializing human tragedies…Thanks to Susan Sargeant and her substantially talented cast, I didn’t leave the performance totally pissed off.