Arts non-profit visionary Teresa Wash trusts her instincts. When she found a dusty, unoccupied warehouse space in Oak Cliff after moving her non-profit arts group from Atlanta, her instincts told her to make it a theatre. The building became hers in 2005. Almost twenty years later, community supported, award-winning TeCo Theatrical Productions serves and impacts more than 15,000 adults and children each year via seasonal multi-cultural programming and student outreach. When a young award-winning playwright suggested Wash consider mounting a stage production of Josefina Lopez’s 1996 stage play Real Women Have Curves as her major fall production, her instincts told her to do it. She invited the young playwright to direct it.

What is you play selection process and why did you decide on “Real Women Have Curves”? We normally start our season with an original full-length play by a local playwright. This year we wanted something different that might engage a new element of our community.  We’re in a largely Hispanic area; many residents have never come to our theatre. When Jonathan suggested Real Women Have Curves, about five Latina women in a dress shop, it struck me as the ideal vehicle for us.

What inspired you to ask Jonathan Norton to direct it? Jonathan has real directing talent. I recognized it while he was rehearsing his entry to our 2011 Playwriting Festival. He’d entered one-acts several times before, and his 2010 entry “84” won our Literary Prize. But he’d never directed. His quirky sense of humor totally engulfs an audience. His direction of The Last Supper had people rolling in the aisles and won our Ninth Annual Playwriting Contest this February. I thought he should direct the Lopez play. I met Jonathan shortly after I first moved to Dallas.  He was the Stage Manager for a children show that I wrote and produced, and since then Jonathan has honed his craft and become one of the most talented playwrights and directors I know.  He was an alternate for the Yale School of Drama twice.  He is a recent graduate of SMU Master of Liberal Studies program.  Early in 2011, he was a semi-finalist for the Eugene O’Neill National Playwrights Festival, and his play My Tidy List of Terrors just received a staged workshop at the Black & Latino Playwrights Conference at TSU in San Marcos a few weeks ago.  His is so under the radar in Dallas and the world is about to see what a literary treasure we have in this young man.  I’m so humbled and grateful that he has remained connected to our theatre all these years.

How did auditions go, and who is the play’s audience? The cast includes five strong Latina women, ages 18 – 65. Women auditioned that knew the play from its 2002 film and were fired up to take part. None had ever been in our theater before. The play takes place in a women’s dress shop. Its main character is a Mexican-American teen struggling to reconcile body image expectations from the Anglo culture with her own body and Latino culture. Anyone interested in cultural conflict and resolution told from a multi-generational perspective should find this play engaging.

What got you started in theatre? I performed in August Wilson’s Joe Turner’s Come and Gone at Theatre Three while I was at the Booker T. Washington School of the Arts. Its poetry captivated me. I went on to Marymount Manhattan College in New York and studied directing. After I came back to Dallas I enrolled in SMU’s Master of Liberal Studies program, studying playwriting with Gretchen Smith, creative writing with Gary Swaim and a civil rights segment with Dennis Simon.

How did you feel about directing “Real Women Have Curves”? 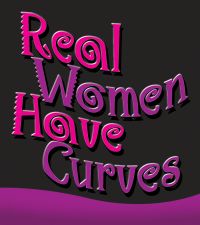 It occurred to me that this play was perfect for TeCo, given all the family-owned dress shops up and down the street next to it.  I mentioned it to Teresa. She surprised me by asking me to direct it, as she’d only seen me direct my one-act. I was concerned at first about the cultural aspect; how could an African American director direct five women in a play about Latina culture? But it’s been fine. Coming from outside the culture has allowed me to bring in a clarifying perspective, keeps the audience in mind.

How hard was it to cast? Amazing. It seemed like the play’s dynamic characters just walked through the theatre door. The lead actress’ accent is chilling; it’s so beautiful, yet her character desperately seeks assimilation, not recognizing her own power and uniqueness as a Latina.

Are they seamstresses? No cast members were seamstresses before. Each has her own sewing machine with its own personality and sound in the show, like imaginary “scene partners.”

How are you incorporating the neighborhood dress shops? Our costume designer is Pedro Perez, artistic director of Allegro Ballet Folklorico. He’s visited the dress shops with filmmaker Philip Morales to shoot behind the scenes and observe what goes into building the lavish dresses they create. We’re turning the entire stage at TeCo into a recreated dress shop based upon what we’ve learned.

What do you hope the audience will take with them from seeing your show? I hope they will recognize the beauty and purity in all cultural traditions and that my actors’ performances will help humanize the challenges of immigrant experience.

The play’s film version won awards at the 2002 Sundance Film Festival and made America Ferrera a star.