The God of Carnage: live in Austin! Farce on a Molière scale with projectile vomiting and passive aggression of Wagnerian proportion. It’s a vulgar, non-PC comedy with overly civilized ACLU card-carrying bluebloods, “nice people”. Tony-winning French playwright Yasmina Reza (Art, 1998) spells it out simple enough for Tea Party hoi polloi to comprehend. For all you reactionary types who have wondered about “The Secret Lives of Liberals”, take some time away from instructing your kids in ritual cross-burning or manly prayer sessions with Texas’ Guvner Goodhair and buzz the Hummer over to the Zachary Scott Theatre on Riverside at Lamar to gawk at this timely side-splitting spectacle. No weapons needed. They make a circular firing squad, dontcha know.

There’s that eye-catching title. “I believe in the god of carnage”, states aloof, amoral corporate attorney Alan, partway through the no intermission bloodbath. “He has ruled since the dawn of time.” How deep does the touchy-feely veneer of politically correct civilization go, anyway, before survival’s savage claws and fangs assert themselves? In a deconstruction worthy of Albee’s Who’s Afraid of Virginia Woolf, two middle-aged married couples, enmeshed in farcically-drawn caricature counterpoint, flay each other free of all pretension to polite discourse, while revealing the dysfunction of their marital relationships and darkest private secrets. In the hands of a lesser playwright and less accomplished cast and director, this could get pretty grim. But Reza’s a genius with words and characters.  ZACH Theatre’s sterling, professional ensemble rises to the production’s challenges with style, focus and skill. There’s good reason this play is the primo offering of every region’s leading Equity house and about to emerge as a major Polanski film (title shortened to “Carnage”), featuring Kate Winslet, Jodi Foster, John C. Reilly and Christoph Waltz. See link below. 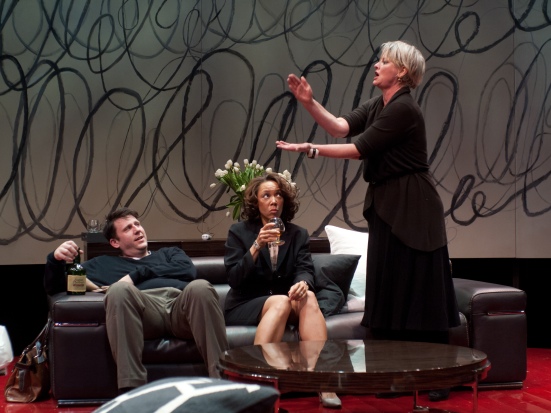 Matt Lenz, the ZACH Theatre’s God of Carnage director, upped the show’s cultural relativity ante a bit by casting topflight African American actors as the visiting couple, the Raleighs. This casting layers on another level of social commentary, particularly when host Michael Novak reveals that he “doesn’t care about Darfur coons” (in much more explicit terms). Carrying forward the dramatic tension of the work as Alan Raleigh, Eugene Lee uses his silken voice and commanding presence to convey patrician disdain for the whole encounter. He barely contains disgust under feigned attentiveness, except when his ubiquitous cell phone calls pull him away completely from the “fun and games” and further fracture the evening. Closest character to the playwright’s voice, he’s the only one who really understands what’s at stake from lights up. Lee’s Alan drags the audience along with him, kick and scream as they may to escape his reptilian charms. Elegant, soft-spoken Angela Rawna presents the picture of well-bred gentility as Alan’s accommodating, subservient spouse Annette, until nausea overtakes her and she imbibes a few too many drinks. Her inner she tiger springs forth; woe to whomever crosses her path. Zach favorite and Austin Critics’ Table winner Lauren Lane joins forces with regional and Off Broadway professional Thomas Ward to create the more realistic couple, Veronica and Michael Novak. Smug in their lifestyles, their cultural milieu, parenting skills, appreciation for the arts and global altruism, Michael and Veronica’s overbearing “white-bread” entitlement functions as a hilarious Achilles heel. It prevents them from seeing the impending, well-deserved onslaught that sweeps over them like a chilled cocktail monsoon. Awash in vomit and flying tulip detritus, every character’s veneer cracks wide open, and the god of carnage emerges to rule again.

A functional, austere “living room” set design by Michael Raiford helps highlight the pretentiousness and bizarreness of the four characters’ behavior. Raiford’s minimalist design includes a monumental abstract painting, looming over the thrust space. Modern artist Cy Twombly, known for his large-scale freestyle scribbles on canvas, inspired Raiford to create the painting as silent commentary on the play’s themes. Blake Reeves’ prop design and Tina Gramann’s fight choreography make the special effects the play’s success and stun the audience with devilish delight. Take your ringside seat and gird yourself for a  farce for the 21st century. Très formidable!

Yasmina Reza’s God of Carnage, translated from the French by Christopher Hampton and directed by Matt Lenz, runs at Austin’s Zach Theatre through January 8.

All photos by Kirk Tuck.

Zach Theatre blog about the upcoming Polanski film and the stage play:  http://www.zachtheatre.org/blog/?p=2370

An LA Times article where playwright Reza discusses her upcoming movie version and the play’s genesis and various stagings: http://latimesblogs.latimes.com/culturemonster/2011/12/carnage-yasmina-reza-roman-polanski.html