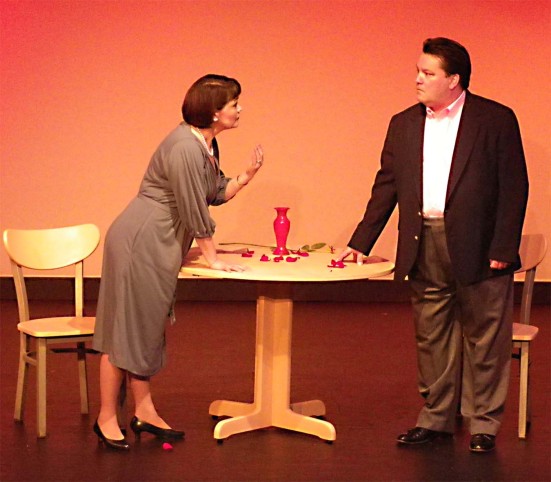 Attending the yearly FIT Fest (Festival of Independent Theatres) at the Bath House Cultural Center feels like “coming home” to a soul-inspiring balance between art and nature. It’s hazy, humid summertime, July in North Texas. Dallas’ concrete highway loops and treeless boulevards lined with retail hawkers fairly sizzle with speed, isolation and the drive to consume. The sultry breeze wafting off glistening White Rock Lake across the Cultural Center’s back portico offers welcome respite from the searing crush of skyscraper glare and attendant commercialism remotely visible through the heat-waves rippling across the lake. It’s as if Mother Nature treasures the fragile non-commercial performance art within the tiny Center, cradling it, fostering it in a conspiratorial way. FIT 2012 reaffirmed this core belief this past weekend.

FIT charged out of the gate on Saturday 7/14 with two of the most sophisticated, textually rich, artistically-executed productions providing thought-provoking entertainment in the region this year. On tight budgets, each well within the Festival’s strict one-act time frame and honoring the venue’s limited technical options, WingSpan Theatre and One Thirty Productions presented two of the strongest performances this reviewer has ever seen at any FIT.

Edward Albee’s 1976 one act “Counting the Ways” springs majestically to life under the spare, reserved direction of WingSpan’s Producing Artistic Director Susan Sargeant and features the brilliantly paired Lulu Ward and Adrian Churchill. A middle-aged couple examines the reality of their long-time relationship over several long-stemmed roses at a simple dining table for two. Albee’s signature dialogue soars. The roses seem to grow pale and wilt before the audience’s gaze as the two characters cross, collide, exit, enter again and spar, blooming, themselves, with revelation, confusion and desire. “Love doesn’t die: we pass through it,” observes one as the play undrapes itself with Botticelli-like grace. Ward’s ever-present theatrical core of unquenchable fire meets its match here with Churchill’s grounded presence: his icy, modulated tones, impeccable timing and unwavering gaze. In resonant complement, as playful (and watchful) as two Olympic-grade tennis pros casually warming up at the net over idle chit-chat, Ward and Churchill exude trust and ease on stage as if they have performed together for years. Lit delicately in elegant silhouette against a blood red backdrop (Lowell Sargeant), every focused gesture or mood shift finds illumination in serene visual symbolism. And then came Sunday’s matinee and a shift in focus…see below.

With equivalent dramatic fervor and professionalism, One Thirty Productions presented Patricia Bosworth’s 1991 two person short “Making Contact”. Recognized as a national arts journalist of merit and celebrity biographer (Diane Arbus, Jane Fonda), Bosworth deconstructs her two unsuspecting characters’ veneers and self-delusions with the laser-like precision of a brain surgeon. What appears at opening as a domestic ‘dramedy’ about a celebrity author enduring a private “sitting” for a sleazy celebrity photographer quickly descends into a psychological cat and mouse game in a rhetorical House of Mirrors with blind doors that open each to crushing truths.

Both characters emerge undone, and the audience careens right along with them, breathless, mouths agape. Director Morgana Shaw creates a film noir-esque scene of surprising, utterly unaffected realism between the author (Gene Raye Price) and the photographer (Jason Leyva). As with Ward and Churchill in the WingSpan production, these two professionals interact as smoothly as a longtime thespian team. Leyva’s Abner’s unassailably jaded, arrogant grit and condescending manipulation wreaks havoc on Price’s almost impenetrable façade as self-indulgent, grieving widow Polly. Then she turns the tables on him. It’s a visceral, somewhat vicious production. Nobody involved with One Thirty Productions shirks the cynical engagement challenge. A claustrophobically cluttered, conventionally bland apartment set by Larry Randolph and dramatically effective costuming by Marty van Kleeck add to the unassuming, understated mood at opening and encroaching sense of horror as the play unsheathes its raking talons. Come out shaking your head, knowing you’ve just visited a strange world born of genuine theatrical magic and mastery. And you didn’t see it coming.

On Sunday 7/15 I returned at what I thought would be intermission after WingSpan’s 5pm performance, to see the FTP Comedy Troupe’s “The Last Comedy Show”. Nature had just graced East Dallas with one if its furious and fast thunderstorm events. As I approached the Bath House Cultural Center’s open lobby door, I was surprised to hear Adrian Churchill deliver a line about Crème Brule. From the lobby? Crossing the threshold, I realized the Cultural Center had lost power shortly after “Counting the Ways” had begun, so the Center’s staff moved actors, set elements and audience to the lobby. Ward and Churchill were performing near the lobby’s far end, framed by the doorway and windows overlooking White Rock Lake, awash in the natural light spilling in from under the early evening portico.

Aside from admiring the two actors’ unflappable professionalism and vocal accommodation, I observed a tender intimacy in their performances that the dramatically lit black box staging simply could not allow. It was equally as much a powerhouse performance as the one I’d seen the night before, not diminished in any way by the lack of lighting or staging. Each actor directly addresses the audience anyway, in the script; it felt as though the two characters emerged as a couple from within the audience in the lobby and took stage almost inadvertently. Playwright Albee would have danced with glee at the heightened naturalism. This, indeed, is the ideal play to present after a power blackout. Thank you, Mother Nature, for cherishing and supporting FIT’s thespian endeavors so appropriately.

Review of FTP’s Comedy Troupe to come; I plan to return to see it later, with its technical effects intact.

For full schedule and to buy tickets or passes, visit:

2 thoughts on “A Natural Fit: Festival of Independent Theatres 2012”