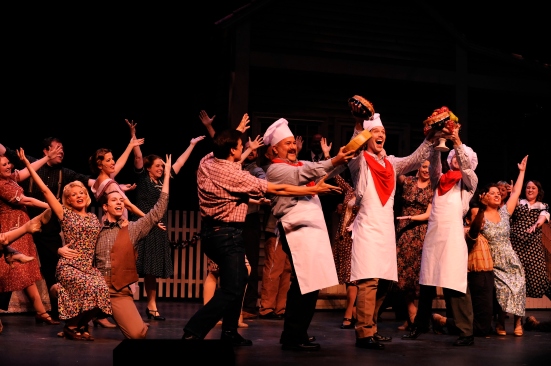 Chorus with comic chef trio: The Most Happy Fella

A most happy audience files out of Carpenter Hall at Irving Arts Center, after experiencing the visually resplendent, musically rich performance of Frank Loesser’s genre-defying “The Most Happy Fella”, under the auspices of the Dallas-Fort Worth region’s champion of musical theatre classics, Lyric Stage. Once again, Jay Dias conducts from a unique, fully orchestrated score, inspiring and enhancing the production’s soaring dynamic at operatic scale, directed by Cheryl Denson with choreography and musical staging by Len Pfluger. In a September brimming over with worthy productions, choose this one now if you love superbly staged musicals. It closes its run this coming Sunday, September 16.

Is it a musical, or is it an opera? Its demanding songs, a full three acts’ worth, certainly require range, depth and vocal skill beyond the reach of the average musical theatre performer. Opening in May 1956, at the Imperial Theatre, “The Most Happy Fella” transferred to The Broadway Theatre in October 1957, where it ran 676 performances. In his May 4, 1956 New York Times review, celebrated theatre critic Brooks Atkinson commented that composer/lyricist Loesser “has now come about as close to opera as the rules of Broadway permit.” Sung in English, it’s a readily accessible human interest and love story, a prime early example of an entertainment with music that also deals with serious social issues.

Lyric Stage’s production gets right to the heart of the piece, bringing its audience directly into the lives of everyday working people in northern California in the 1920’s with its humorous opening number “Ooh! My Feet”, sung with expressive ennui and bell-clear voice by Catherine Carpenter Cox as Cleo the waitress, the show’s comic relief lead and the romantic lead’s wisecracking sidekick.

Amber Nicole Guest as romantic lead Rosabella immediately follows, revealing her character’s heart’s desire with angelic lyricism and an amazing vocal range, delivering the complex “Somebody, Somewhere” as easily as a nursery song. Hard to tell if the audience is more in love or in awe of her. One by one the leads enter, each enlivening the difficult, elaborate score with comprehensive vocal talent and superior acting chops. Audience appreciation mounts to an almost audible hum: basking in the dark, sultry glow of Doug Carpenter as vineyard foreman Joe; eating up the sunny charm and wacky antics of Alex Organ as Cleo’s sweet, ingenuous boyfriend Herman; or shedding a tear in amazement at the boundless expressive capacity and engaging warmth of longtime professional Bill Nolte, who as Tony carries the full emotional arc of the play’s plot on confident, creative shoulders. 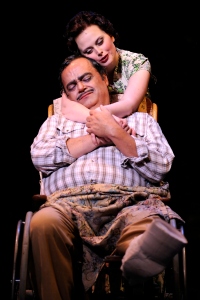 With a chorus that never blunders a dance step or sings a false note, Denson, Dias and Pfluger’s direction styles blend smoothly to evoke the simpler, sleepier world of a 1920’s Napa Valley vineyard, while keeping the production sharply defined for today’s audience tastes. Minor to the story arc but of particularly charismatic theatricality and adored by the audience is the trio of Italian chefs, Giuseppe, Ciccio and Pasquale. Expertly harmonized and danced by Max Swarner, Martin Antonio Guerra and Tyler Donahue, this trio adds festive “brio” to the production. Scenic design by Michael Anania (originally created for New York City Opera’s 2006 production) conveys the lush, verdant feel of the Napa Valley, and Julie N. Simmons’ lighting design catches the perfect ethereal glow of the region. Costumed in contrasting bright or muted styles and hues for city and country-folk, Drenda Lewis’ costume design helps maintain the sweeping, pastoral sense of Frank Loesser’s most happy musical theatre work.

2 thoughts on “Vintage Perfection: Lyric Stage & The Most Happy Fella”