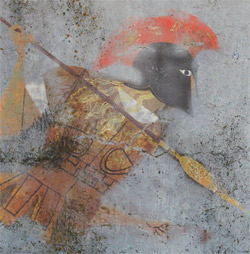 Who was the Greek poet Homer, anyway? Known as the “Homeric question”, there’s speculation about his existence comparable to William Shakespeare’s. Both have spawned a raft of scholarly and semi-sensational writings that assert, “Someone else wrote these works”. Maybe around the 12th or the 7th or 8th century BC, a poet known as Homer, or a guild of “someone’s” (Homeridae), lived in the Mediterranean region and wrote poems; (homeros can be translated as “hostage/ he who is forced to follow/ he who is blind”). This individual or bardic guild developed an amazing epic narrative poem in dactylic hexameter to recount in oral tradition, depicting the Trojan War (The Iliad) and Odysseus’ convoluted return home from the war (The Odyssey). The Iliad is revered as the oldest extant work of Western literature; together, both works impacted the development of Greek culture in ways matched by nothing else. Both underlie countless aspects and assumptions of wider Western culture and a vast array of artistic output. If a deep-rooted, far-branching tree represents the whole of Western culture, Homer provided its generative spark.

No small feat to translate The Iliad into something that functions fluidly on stage or screen and honors the spirit, ferocity, lyricism and narrative quality of the original adaptation handed down to us in written form over the centuries. Tony-awarded Irish-American actor Denis O’Hare and leading US freelance director Lisa Peterson adapted the recent Robert Fagles’ translation of The Iliad from its  “24-book” opus form to an engaging, accessible 100-minute work of performance art. Guided by a time-traveling modern day poet who embodies the spirit of Homer and portrays a range of warriors and royal characters as the tale unfolds, the work straddles narrative and theatrical genres. Dallas’ Undermain Theatre produces lyrical experimental work that often examines iconic themes and archetypes through intense, literate, mythic depiction. “An Iliad” perfectly suits the artistic paradigm that exists at Undermain.

The company’s Producing Director Bruce Dubose plays The Poet, recounting, or living, the epic with enraptured dedication. Multi-skilled instrumentalist and vocalist Paul Semrad backs up Dubose on a variety of contemporary, multi-cultural and historical instruments, effectively reinforcing the mood of a passage or defining its sense of place. They function as separate entities, but Director Katherine Owens maintains their complimentary blend throughout. Both performances entertain, engage and inform with appropriate dignity and pathos, occasional humor.

The Iliad, the epic poem, in its graphic telling of the siege and destruction of Troy, represents one of the world’s most eloquent condemnations of man’s grotesque, cruel-spirited, destructive obsession with making war on his fellow man (unintentionally?). At one point “An Iliad’s” script diverges from its original, and The Poet reads off the names of other wars through current times from a seemingly unending scroll. The only part of the performance that feels “stage-y”, this inclusion intrudes upon the majestic horror of the original in a transparent attempt to make the performance “relevant for today”. Cue the neon lights? Just as substituting pop music ballads for Shakespearean soliloquies diminishes those plays’ integrity, this heavy-handed, unnecessary addition distracts briefly from a first rate performance. Overall, it’s an impressive, ethereal staging of one of the world’s greatest epic tales. No intermission, superb material for reflective after theatre discussion over several glasses of wine.

“An Iliad” runs through October 27.

From Wikipedia: A kommós (literally “a beating” of the breasts in mourning) is a lyrical song of lamentation in an Athenian tragedy

A worn paperback copy of The Iliad has graced my bookshelves for years, standing proudly between Mark Twain’s The War Prayer and T.H. White’s The Book of Merlin. War be damned.