American Airlines enjoys a close personal relationship with nationally celebrated performance artists Fred Curchack and Laura Jorgensen. That’s because this dynamic, creative duo lives and works c.1800 miles apart and spends lots of time commuting between Texas and California so they can perform their unique original plays together. It’s an arrangement that works well for both, allowing each the freedom to create independently but still find satisfaction in performing mutual projects. Fred and Laura open the regional premiere of their newest production, “Burying Our Father: A Biblical Debacle”, on Halloween Eve at Dallas’ Undermain Theatre in Deep Ellum, running through November 17, 2012. They describe the work as an “irreverent, hilarious exploration of the similarities and differences between the Abrahamic religions and the impact of these beliefs on the lives of individuals, on family, society, and history… combining comedy, drama, music, dance, and light and shadow magic.”

Regional arts journalist and theatre critic Alexandra Bonifield caught up with Fred and Laura on break from rehearsing the show. She chatted with them about their creative process and what to expect from the play opening this week.

How and when did the two of you start working together? Laura: About 34 years ago, I took an acting workshop Fred taught at Sonoma State University in California. After the workshop, we developed an improvisational performance piece with a third actor called “The Mental Traveler” (based on a William Blake work). We became friends and occasional collaborators after. I left California and traveled and acted abroad for years. When I returned c. 15 years ago, I ran into Fred at Cinnabar Theatre where he develops much of his work. We picked right up where we’d left off. Fred: And we’ve now developed and performed nine plays together, working around Laura’s busy performance schedule and family time.

Since you live far apart, how does the creative partnership work? Fred: I dream up the initial ideas and write, then Laura contributes and tweaks, sometimes in long phone conversations. She respects my committed involvement to the writing process, and I admire her success as a visual artist. Our starting points intertwine, and we complement each other’s strengths in multiple disciplines. We always start with text, which can take months, or years, to fully develop. Sometimes we incorporate video or shadow play behind a scrim. Plays often grow and evolve as we’re first trying them out on stage.

How do you stay flexible and fit for the intense level of physical theatre you create? Laura: Mostly an hour and a half of yoga, with some singing. You have to keep it up regularly. Fred: We used to do elaborate vocal warm-ups, and Grotowski, now it’s the yoga that seems most effective. A central concern in my work as an artist and teacher is the question of AWARENESS, both in one’s body and being fully present in the moment, in a totally pure sense. I see it as a global problem.

To Laura: You’re based in Sonoma County CA. What keeps you there?Family and theatre keeps me very busy there. My grandkids are a priority, and Fred’s family with grandkids lives close by, too. I perform all over the Bay Area. I recently directed Dario Fo’s farce “We Won’t Pay, We Won’t Pay” for Cinnabar Theater. Fred jokes: She performs lots of “real” plays in California where she’s a reigning superstar. She occasionally “deigns” to work with me on my originals, which we perform in both California and Texas.

To Fred: How does developing new plays and performing work with your teaching responsibilities at UTDallas? It’s something of a balancing act, but we have made it work. The school has been great. They let me teach early in the week, so I don’t miss classes and still can fly out to California to perform over weekends. And visit with the grandkids!

Talk about “Burying Our Father”: What was its genesis and where is it now? Fred: About 12 years ago I created a musical theatre improvisational piece with Jazz percussionist Jamal Mohamed about the struggle between the biblical Abraham’s sons Isaac and Ishmael. It lurked in my mind for years as a rich, charged topic, worth delving into further. What would transpire between these two fictionalized brothers from the Bible separated at childhood, both archetypes, one the foundation for Muslim faith, the other for the Judeo-Christian tradition?  Laura: There’s lots of confrontation in the work we perform, different stories and worldviews that clash. The main characters have different relationships to God, the father of monotheism, as well as their actual father Abraham.  In the play we examine an array of manifestations of the FATHER. Fred:  I see it as a struggle for inner awareness. Can one perform with such awareness in art and theatre as to illuminate evil, blind faith, and intolerance? I see the play as a demonstration of what it is to become awake and fully aware through performance.

Is it funny?  Fred: Absolutely! One of the main reasons people come back to see it again. It’s great fun for teen-agers and adults. It includes the origins of circumcision and other humorous topics….

How many roles are in the play?  Fred: There are eight or nine. Laura plays six, as she’s so facile with characters. Laura grimaces and grins:  I get to “play God”, which is really exhausting!

Are there musical instruments?  Fred: I incorporate a range of instruments, play mostly guitar. There is an unusual Angel Harp that a friend found at a thrift store. They claimed it was one I had made c. 40 years ago. I had them ship it to me, and sure enough…my old instrument came home and is now in our play. 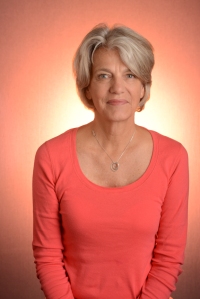 Where have you performed it before?  Fred: Earlier this year we performed it at Cinnabar Theater in Petaluma CA (cinnabartheatre.org) and Main Stage West in Sebastopol CA (mainstagewest.com). Laura: Audiences at both venues kept coming back to see it again. They said it made them laugh and think, too.

What do you hope your audiences will take away from seeing the show? Laura: Maybe get inspired through laughter? Fred: I hope audience members will consider their own belief systems with enhanced awareness while laughing their heads off at our crazy antics.

Fred Curchack has created seventy-seven original theatre pieces (fifty ensemble works and twenty-seven solos).  His award-winning performances have been featured at dozens of international theatre festivals. His work incorporates Indian Kathakali, Japanese Noh, Balinese Topeng. He studied choreography with Alwin Nikolais, and he trained with Grotowski’s Polish Theater Lab. He has spent 27 years as Professor of Art and Performance at The University of Texas at Dallas.

Laura Jorgensen was a founding member of Western Union Theater Company at Cinnabar Theater.  While living in Budapest, she acted at and directed for The English Theater Company. She acts in and directs both contemporary and classical plays in California and Texas.