Whatever happened to fair dealing?

Why is it everyone now’s a pain in the ass?

Whatever happened to class? 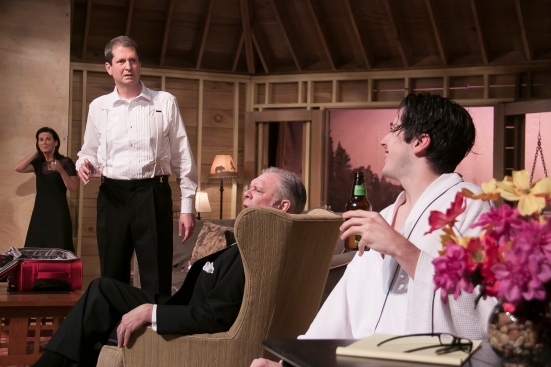 Class and good manners take a genteel beating in A.R. Gurney’s 2011 situation comedy set in a hotel living room suite in a frowsy Adirondacks inn on the eve of a modern day wedding, where different generations’ expectations for the “rehearsal dinner” drive its conflict batty. Pity well-intentioned, middle-aged WASP father-of-the-groom Curtis (Stan Graner), clinging desperately to tradition handed down to him as sacred gospel by his overbearing father’s ghost (John S. Davies). The elder man haunts his son in full black tie dinner jacket attire, offering outdated advice while quoting Chaucer and Joseph Conrad, popping into the room from odd corners, unnoticed by anyone but Curtis. Faced with a challenging multi-ethnic, multi-racial marriage, Curtis’ well-laid plans for a “traditional” dinner with rehearsed speeches, toasts and formal attire go madly awry as the evening unfolds. Even his liberal Democrat wife Mimi (Marcia Carroll) has taken up swearing and likes the idea of the bride-to-be’s gay ex-husband, a ‘surprise guest’, taking over to perform a stand-up comedy routine with music and slide projections. Gurney introduces the audience to Curtis and Mimi’s grown children in limited doses: control freak, commitment-phobic Elsie (Katherine Bourne) who resents her go-between status at the rapidly unraveling event; and their son, the groom-to-be, Teddy (Jordan Brodess), who parties naked with his male buds in the hotel pool and wonders aloud if he’s making a terrible mistake….

Gurney’s a prolific and much honored playwright, celebrated for a popular 1980’s style of theatre, where his gentle examination of WASP life and moral values (Sylvia, Love Letters come to mind) doesn’t dig deep into human failings but offers plenty of laughs for a pre-“Seinfeld” or “The Office” generation of sitcom lovers.

WaterTower’s production, directed deftly by Rene Moreno, captures the retro style and leisurely pacing of Gurney’s oeuvre and plays it to the hilt. Most of the show’s humor arises from the interplay between the ‘friendly” domineering ghost father and gently befuddled Curtis. Graner’s Curtis enters into the comic repartee with an openhearted, unsuspecting innocence; and Davies’ ghost nails every laugh line like a wry Johnny Carson with a favorite guest. “Naked people have little to no influence on society”. The other three characters function as foils or scene catalysts and offer predictable but viable fodder for the father-son duo’s ongoing discussion. Charming, sweet, plausible – this ensemble fits together well and maximizes the show’s potential. Bob Lavallee’s “hunting lodge” set with its upstage blue-tinged mountain vista visible through open doorways conveys the sense of a not quite first-rate “destination” resort perfectly. There’s a gratifying surprise twist at the end (no spoiler, me) that sends the audience out with hope and renewed respect for good manners in every circumstance.