In Rob Kendt’s New York Times review of Dan Clancy’s Holocaust drama The Timekeepers, which ran at the Barrow Group Theatre in 2006, he describes its unique, flamboyant character Hans as “less a gay martyr than an erstwhile habitué of the “Cabaret” Kit Kat Club, rudely awakened in a tomorrow that doesn’t belong to him.” One can’t live in Western culture and not be familiar with the dark side of Nazi repression. Clancy’s play doesn’t diminish the horrors of the Holocaust, but emphasizes the power of wit, creativity and human resilience to rise above the darkness, in spirit if not physical survival. Longtime stage director and gay activist Joe Watts mounted and directed The Timekeepers in Houston at his Theatre New West, earning strong critical praise and audience approval for his production. Now Dallas-based, he partners with The Dallas Holocaust Museum/Center for Education and Tolerance for a six day run at their West End venue, featuring a bright, fresh talent in the North Texas performance scene, Jeremy W. Smith, in the complex role of Hans. I caught up to Smith on a break from his daytime job as a personal trainer at Gold’s Gym. 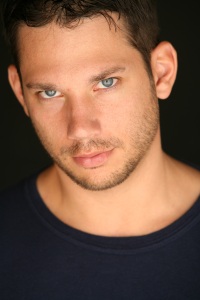 Jeremy Smith isn’t just a glass half-full kind of guy; his super-sized cup runs full to the brim. From the first moment you engage him in conversation, you can’t miss his openhearted enthusiasm for life or mischievous playfulness.

What got you started doing theatre? “I was definitely the class clown in school; I liked the attention. It’s addicting. I have tried to stop acting several times, but I just couldn’t.”

Where did you study? “I studied acting first at Florida State, then with T.A. Taylor at KD Studios when I came through Dallas for a while. When I moved to Los Angeles, I studied at the Beverly Hills Playhouse over a seven year span, an immersion experience with tons of physical work: speech, dance, movement, combat, the business of the business, as well as lots of scene study. Milton Katselas founded The Playhouse in 1978. It’s considered a top flight acting schools in Los Angeles, with branches in New York and San Francisco. Katselas studied with Lee Strasberg and Sanford Meisner at the Actors Studio before developing the Playhouse. It opened lots of doors for me. At one point I toured the East Coast in a professional production of Othello as Michael Cassio. I appreciate how live theatre sharpens my skills. I view every play I’m in as another class in deepening my performance range.”

How did you find Joe Watts and Theatre New West? “Through my Texas agent, Sooze Johnson, at The Agency Dallas.”

What has Joe been like as a director? “He’s given us lots of freedom to explore different aspects of our characters. The bonding of the two prisoners, not likely friends, is the crux of the play’s conflict. Joe helped us find honest balance between the dark and light elements of both, not always easy to do. He has wonderful vision as a director, can be subtle or strong when he needs to be. He has a lot to offer to the Dallas theatre scene. I hope the arts community turns out to see his work.”

How did you develop Hans’ character? “I created him partly from gay people I know, partly from studying the history of the gay experience in the Holocaust. I found it hard to not get caught up in the nightmare, the horror, which isn’t really the character. Hans survives by his wits and charm. He’s a real hustler, a liar, frankly not always likable. Hans pretends he knows how to repair watches to avoid getting killed by the Nazis and gets thrown into the cell of a real watch repairman, an older Jew who hates gays. That’s the show’s starting point. As Hans I have to convince the real repair guy to teach me to repair the watches we pull off the people killed in the gas chambers. It’s chilling.”

Did you alter your physical appearance? “I shaved my head. I have dropped c. 25 pounds, starving myself. That was hard on my brain and body, but I wanted to go through the transition to become this character. I wanted to feel some part of the experience the character would have had. I want to look the part but also feel it in everything I do.”

You aren’t gay, but Hans is a really out gay character. How does that feel? “I’ve had lots of gay friends over the years and worked at Woody’s as a bartender for a while. I don’t mind playing gay at all. At 16, I moved in with my gay older brother and his husband, and they took care of me. I’m part of a generation which believes that being gay or straight makes no difference. And I learned in LA that you never pass judgment on your character; you play it.”

Why does this play matter? “There is still so much hatred out there, the bombings, the wars, prejudice against marriage rights for LGBT people. The Timekeepers is a play about affirmation and tolerance. Dark issue plays have to be performed to remind people that history repeats itself and that we can choose to make life better.”

What do you hope the audience takes away from the performance?  “I hope it appreciates and relates to the resilience of the human spirit my character demonstrates, and I want to get cast in more regional theatre!”

The Dallas Holocaust Museum/Center for Education and Tolerance is located in downtown Dallas, in the West End at 211 North Record Street, Dallas TX 75202. Contact 214.741.7500 or DallasHolocaustMuseum.org for more information.

The adult content of this production is not suitable for young children.

Rob Kendt’s 2006 review of the Off Broadway production of The Timekeepers: