Ever had a memorably awful experience in the “bar scene”?

Dating Game gone all to Hell? You ain’t seen nothin’ yet. Laugh, gasp, wince if you must: but don’t look away from Jailbait, Deirdre O’Connor’s 2009 dramatic comedy about hetero mating rites and wrong. Very, very wrong. Dallas Actor’s Lab, under the founding artistic direction of University of Dallas Drama Chair Kyle Lemieux, presents a most satisfying production of the alarming, disarming work, comprised of a tight, professional ensemble: four of the most compelling young talents in the region. Easily one of the best productions of 2013, it runs through August 31 at the Bath House Cultural Center, so make a date to see it. Maybe not a “first” date?  www.dallasactorslab.org 214-604-7113

Boston-born, Irish-American O’Connor, a recent graduate of Columbia University’s MFA Playwriting program, feels the play reflects upon American obsession with youth. “We seem to be at a time in our society where we really value youth and being in your early twenties, and everyone around us is really trying to look like that and dress like that and act like that. In ‘Jailbait’ I’m trying to examine where is the place for adulthood in all of that?” Aside from the lofty theme, O’Connor has a rare knack for developing character and motivation and employing vivid language, all so lacking in much of today’s award-winning, hyper-reality focused stage performance. A stint writing for “The Electric Company” earned her an Emmy and clearly fine-tuned her bold talents. I forgive her the episodic, made for cable TV structure of the work, as her characters simply grab the script by its hefty spine and leap aboard its rollercoaster of creative reality. With the combined acting skills of Jeff Swearingen, Mikaela Krantz, Kyle Lemieux and Katherine Bourne at work here, fasten your rhetorical seatbelts and strap down your condoms. You’re in for a steamin’ ride.

Two pairs of best friends prepare for an evening in the pick-up bar scene, with varied hopes and visions of “scoring”. One girl takes the lead, a non-virgin, steaming up her virginal friend’s demure looks with sultry make-up, bemoaning her lack of a padded bra. 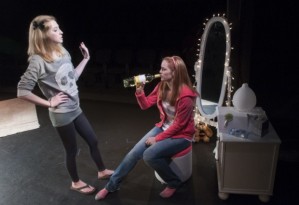 One man is a de facto womanizer, as opportunistically commitment-phobic as he could get (“My first wife isn’t even born yet, “ he boasts.) His buddy has just stepped out of a longtime relationship, still in shock, not sure he’s ready for a night of fornicating revelry. I’ll leave the kick-in-the-gut part out for your enjoyment, the soul-shredding element to the play’s resolution that makes it such a nightmare of the imagination…and an effective revelation of O’Connor’s stated thematic intention.

“But was she hot?” Mark in Jailbait

Best use I’ve seen in a long time of a costume piece as a revelatory prop occurs near the end, involves a girl’s dance pump. “But was she hot?” snivels the crass Mark, played with utter amoral abandon by Jeff Swearingen. It’s the best line in a play I’ve heard all year. See the show to learn why.

How refreshing and reaffirming to view a production this good from a young company without major funders and high-end production amenities. No $3M ‘workshop production’ without a song list, this. Reminds me that what works best on stage, what keeps theatre alive, is a strong script with intriguing, motivated characters, clearly defined conflict and resolution, and high quality acting. Jailbait nails it.

All that’s needed is you in the audience….”Aaah, I’d love to love you, baby….”