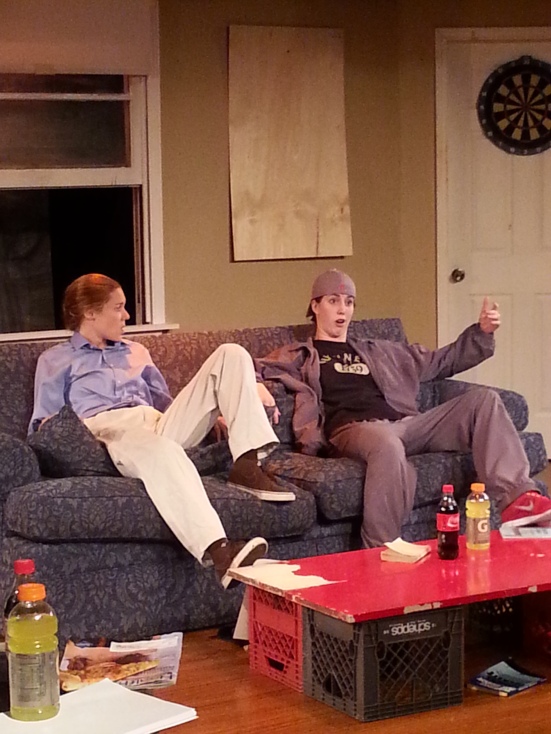 No doubt about it. Miller Pyke and Catherine DuBord give non-stop, outstanding performances as Ben Affleck and Matt Damon in Echo Theatre’s oddball, one act farce Matt & Ben, running at the Bath House Cultural Center through September 28, 2013. Pyke, tall and rangy in gesture and energy, bulks up readily like a guy with oversized sweatshirts and backwards baseball cap. DuBord, one of the most feminine actors on the current scene, travels a wider arc. She conveys a well-defined sense of masculinity in her much more contained portrayal of the “sensitive” one of the pair of these famous, wacky dudes. The duo never lets up in the show’s 75-minute span. They engage in fisticuffs at one point, which feels like it could spill right out into the audience with intensity. Pity no stage combat director gets credit in the program.

Matt & Ben won Best Overall Production honors at the 2002 New York International Fringe Festival. It was the only play invited to appear at the HBO-sponsored U.S. Comedy and Arts Festival in Aspen that year. It came to life as the happenstance brainchild of two Dartmouth college graduates, rooming together in New York City during the summer of 2001. Mindy Kaling and Brenda Withers started improvising conversations as the two recent Oscar winners Matt Damon and Ben Affleck. The play emerged with an absurd premise: while Matt and Ben are trying (without success) to write a screenplay based on Catcher in the Rye in Ben’s apartment, the finished script of Good Will Hunting appears like a gift from God on their doorstep. The play feels very “fringe-y” with lots of horseplay and silly jokes. Two women playing the male celebrities add to its quirkiness. Kaling justifies the gender bending in an Aug. 4, 2003 article from eonline.com: “I think it helps the play come off as more affectionate than just mean and jealous…We’re not competing with them for roles, so there’s no underlying bitterness or meanness towards them. It’s also just funny to have Brenda and I playing them, because we obviously look completely different.”

I’m not sure the work deserves staging today as a stand-alone full production, but it is interesting to see the two Dallas actresses create and sustain the unusual, convincing reality. Set and directed in a conventional, linear manner on the tight, tiny Bath House stage, such direction as exists lacks originality or any sensitivity to the farce quality of the piece. The staging underlying the two actresses’ performances seems timid and static, as if the women were given basic blocking and then they directed themselves into larger than life characters. Experienced professionals  with strong instincts.

It’s impossible to learn about this production’s director’s qualifications/ experience from the show program. Her bio says she has earned a BA, BFA and MA; but it doesn’t say in what fields or from which institutions. Her “director’s notes” are some of the most vapid and poorly written I’ve ever seen representing a professional theatre company. Say nothing, if you have nothing to say. First line, a bizarre and awkward non sequitur: “In a male dominated world, it is startling when a script drops from the ceiling into view that is good, that has characters that are interesting, that is fun, fresh, and in the now.” Aside from the peculiar visual she conjures up (“dropped from the ceiling”), she implies that scripts from a “male-dominated world” are not “good, fun, fresh, and in the now”. That’s hardly true. Surely it’s not what she meant to say? My instinct tells me Kelly Thomas must be a young director. I suggest that she study some senior directors’ program notes to get the hang of it: the seasoned professional Robin Armstrong comes to mind. I mean this kindly. To succeed as a female director in a sexist arts field, you need to come across as 200% more qualified and on the ball than any man. Just ask Robin.

The audience howled with laughter on opening night. You might, too. Matt & Ben: worth seeing for Pike and DuBord’s performances. Photo by Ashley Steele