Every year I’ve attended the TeCo Annual New Play Competition, I have seen the quality of submissions improve substantially. What at first seemed like a casual jumble, some of it frivolous self-indulgence, has steadily grown towards becoming an array of intriguing, emerging works, some carefully thought out and crafted with dramatic intention. At the 12th Annual New Play Competition, social justice issues dominate the stage, with a sophistication and depth not always demonstrated by major full-length plays. On the other hand, production values have not kept up with the improving quality of playwriting and need a professional boost in future years.

1)    Ruth Cantrell’s “The Swing”: A Dramatist Guild and Actor’s Equity member, Cantrell was last year’s competition runner up with her play “Amaryllis”. She demonstrates a solid gift for weaving metaphor and symbol into realistic situations with nuanced, interesting characters. Her current entry incorporates a simple poem into scenes portraying racial bigotry and youth’s innocence. The protagonist, a young girl played by Kelly Pennington, quotes 19th century author Robert Louis Stevenson’s poem “The Swing”, as she swings from a home made rope-swing center stage, the play’s setting. 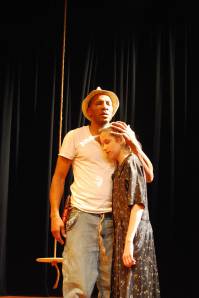 Vontress Mitchell gives an earthy, thought-provoking performance (the best of the evening) in his role as the play’s catalyst and voice of reason. He brings a measured balance to the script’s dialogue and honors its rhythms, adding suspense and allowing the audience to consider its own responses as conflicts unfold.  Cantrell’s play entertains as is but begs further development, warrants a second act. You really want to know what happens next to its memorable characters. Ruth Cantrell directs. (No acknowledgement of Stevenson as poet appears in the TeCo program, probably an inadvertent oversight.)

2)  Steven Young’s “Under the Overpass”: Award-winning author, college professor, comedian and actor/director with a full scroll of regional, national and international successes in all undertaken genres, Young presents the darkest, most mysterious play in the Festival Competition, seething with character complexity and potential for explosive violence. Set under a highway overpass, it revolves around a “chance” encounter between two male ideological, class and racial opposites that teeters on the raw edge of savagery. Like Cantrell’s play, “Under the Overpass” feels like it warrants being part of a full-length script. Unfortunately, its director Bethany Kennedy never capitalizes on its potential. Her actors, Douglas Garcia and Jeffery Pope, wander casually around the stage spouting lines and plodding through blocked, stereotypical movement without creating any of the real suspense inherent in the play. TeCo has definitely upped their game with this caliber of play. Now they need to find/ hire better directors to help actors bring the works to life.

3)  “Strangers In A Chapel” by Antay Bilgutay. Bilgutay has won TeCo’s Literary prize twice for his idiosyncratic, original one acts. This work soars above his previous endeavors and is easily the most coherent, polished entry in the competition, as presented. Two characters meet by chance in a hospital chapel. They both dread seeing a dying hospitalized loved one for the last time and seek the chapel as refuge from reality. Clean, well-defined character arcs follow logical, truthful, entertaining trajectories. Both seem defeated by fear at first, but their unexpected encounter drives them to find unexpected resources of strength. David Kelting directs “Strangers In A Chapel” with understated confidence. He guides his actors Renee Miche’al and Bill Richard along a defined, but natural path, allowing them free rein to find believable motivations and resonances but not losing sight of the play’s resolution. The pair works together with ease and grace, doing justice to this strong, soulful work and presenting the most finished performance in the 12th Annual Play Competition.

The other plays in the competition are: “Grieve: Simon Bishop Presiding” by Elle Vernee; “Straight” by Sam Green, Jr.; and “Super” By Lindsay Jenkins, Kyndal Robertson and Camika Spencer. All have entertainment value but are truly works in process with production value challenges.