French people often get recognized both for their rudeness and their risqué sense of humor. Marc Camoletti’s romantic farce “Boeing Boeing”, listed in 1991’s Guinness Book of Records as the ‘most performed French play in the world’, explores both aspects of the French personality and delivers a hilarious evening of fun, fluff and frou-frou.

If you get the chance to see this farce performed by Sharon Veselic’s able cast at Greater Lewisville Community Theatre through May 11, 2014, let your hair down, settle back and enjoy the bumpy ride.

Seize the day, several of them. On the waxing cusp of “free love” courtesy of The Pill’s wide availability, enterprising bachelors might seek to find ways to derive benefit from a fresh opportunity. In “Boeing Boeing”’s case, protagonist Bernard has managed to ‘get engaged’ to three different airline hostesses, who each live with him at his swank Paris apartment on their different schedules, without any knowledge of each other’s existence. A nationalistic German, a fiery Italian and an enterprising American hostess, all sexy kittens, add international flair to the caper. Bernard’s nerdy college buddy Robert shows up, not quite the smooth operator; and Berthe, Bernard’s brusque French housekeeper/cook, refuses to continue perpetrating the deceit after all hostesses converge inadvertently at the same time. Remember: it’s not a drama or murder mystery, it’s a farce. It does make for quite a tangle to sort out.

“Boeing Boeing” opened in London’s West End in 1962, where it ran for seven years. Its 2008 Broadway revival won Best Revival of a Play; and Mark Rylance, playing nerdy Robert, won the Tony and Drama Desk Awards for Best Leading Actor. With Veselic’s charming cast, this 50+ year old play still feels fresh, relevant in respect to how men and women can behave about “love” and funny as they come, minus any off color language or dirty jokes. A versatile stage actor and cast member of TNT’s “Dallas”, Ken Orman presents a cagey, but lovable, Bernard, smooth as glass when the show opens but wrung out (rightfully) to a frayed frazzle by final curtain. As Bernard’s goofy buddy Robert, Jeff McGee works the scenes as though he’s always one step behind the action. His doe-eyed sincerity and utter inability to cope coupled with a healthy dose of “attraction” to one hostess make him easy to cheer on. The hostesses, played by Noelle Fabian, Jen Peace and Colleen Reed, each have a go at Bernard and a dalliance (of sorts) with the hapless Robert before the jig’s up. Eliciting the most laughter the night I attended, Olivia Norine’s Berthe finds real sympathy with the audience as the one sane character on stage. 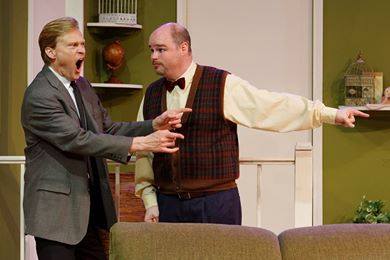 Norine maintains her French accent well, tossing off her “bon mots” with derisive ennui, yet clear for American ears to understand. Pacing ran a bit slow in the first expositional scene opening night. Once Robert and the gaggle of girls entered, this farce wound itself tight as an old-fashioned alarm clock waiting to sound off and wake the dead.

It’s often said that the best thing a stage director can do for a cast and show is get out of their way. Veselic’s velvet glove direction style works handily here. Characters’ individual arcs synchronize well causing the play’s arc to soar along under the almost imperceptible guidance of one wise, restrained director. Je dit a tout: c’est magnifique!