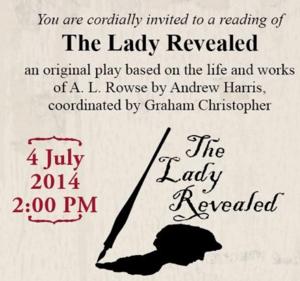 “I have had great difficulty in containing myself or making myself go off to sleep the last few days, for on Thursday, while writing at my Forman book, I found that I identified the Dark Lady of Shakespeare’s Sonnets.” A.L.Rowse 3/2/1972

Controversial Oxford historian A.L. Rowse shocked the theatre world when he revealed a possible identity for the infamous Dark Lady of Shakespeare’s sonnets in 1972. Dr. Andrew Harris’ THE LADY REVEALED centers on Rowse’s discovery found on a dusty library shelf, conveyed in the lurid Casebooks of a colorful Elizabethan astrologer. Swept via theatrical time warp to Shakespeare’s inner circle and time, Rowse uncovers the identity of the Dark Lady immortalized but never named in the Sonnets. Convinced his discovery will earn him the Royal Order of Merit, he announces his revelation without going through proper academic channels. He becomes an object of ridicule by the Oxbridge elite that fails to honor the significance of his discovery and resents his desperate need for recognition. Mystery, romance and intrigue abound, while time straddles historical settings. In March 2014, Dallas, Texas’ respected Theatre Three produced a professional workshop reading of THE LADY REVEALED. Theatre Three’s Executive Producer, Jac Alder, played Rowse in the reading and speaks fondly of the experience: “The role of Rowse is splendidly taxing — as likely the man himself was. A man with a long life, an obsession and more talent for talking intimately with his cat than with colleagues is, for sure, a fit subject for dramatization.” 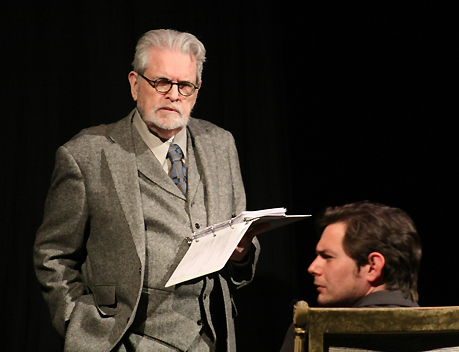 Playwright Dr. Andrew B. Harris has extensive professional production and scholarly credits. Among his plays are The Eternal Romeo and Juliet, Erasmus, and Tar-tuff (based on Molière’s Tartuffe). A noted Edward Albee scholar, Dr. Harris compiled, produced, and directed the world premiere of Albee’s Women. Other production credits include shows in New York, Chicago, and Texas including The Life of Galileo (with Laurence Luckinbill), Tennessee Williams‘ Suddenly Last Summer (Dinah Merrill), and the first Sam Shepard Festival (Shep in Rep). Dr. Harris is the recipient of the first Award for Excellence in Education for his book Broadway Theatre and USITT’s coveted Golden Pen Award for The Performing Set. He works as Professor of Theatre at the University of North Texas in Denton; teaching theatre history, play analysis, and playwriting.

THE LADY REVEALED will be presented Friday, July 4 at 2PM at the Tristan Bates Theatre (1a Tower, Covent Garden, London) for invited theatre industry and West End insiders.

For more information contact Philippe Carden at philippe@cardenwright.com or 020 8394 2658.

One thought on “Dr. Who and Downton Abbey Actors perform Texas playwright’s London reading of THE LADY REVEALED”