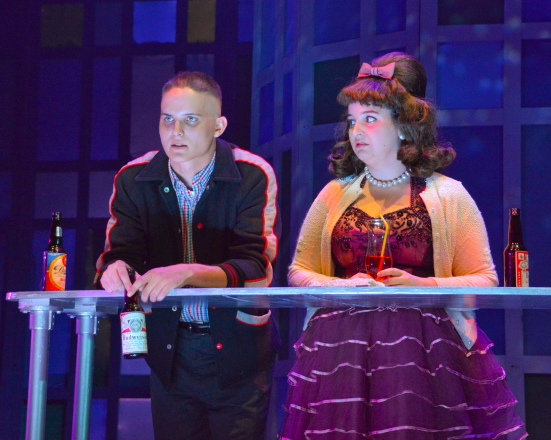 Zak Reynolds and Juliette Talley as Eddie and Rose in Dogfight

WaterTower Theatre has a bonafide hit on its stage in Dogfight, a 2012 Off Broadway musical by Benj Pasek and Justin Paul, based on a 1991film of the same name. With masterful direction by Terry Martin, it oozes seductive, nostalgic allure, set on the eve of the JFK assassination in 1963 (which figures nowhere in the show). It focuses primarily on the last night a trio of Marines spends in San Francisco before shipping out west to a tiny engagement called the Vietnam War. WaterTower Theatre’s production runs through August 17th at the Addison Centre Theatre.

Boy meets girl. Boy loses girl. Boy gets girl back. A massive dose of abuse spans it all for good measure. It follows a somewhat similar arc to the 1945 Rodgers and Hammerstein musical “Carousel”, detailing the downward spiral of an abusive relationship between a “tough guy” and the devoted woman who loves him, in spite (or because) of, his violent abusiveness. Dogfight is a mixed blessing: dynamic, tuneful score and evocative staging; repugnant subject material, romanticizing the culture of abuse.

“Oh, what’s the use of wond’ring

He’s your feller and you love him,

That’s all there is to that.”

So sings abuse-addicted Julie Jordan in Carousel about her abusive “feller” Billy. In Dogfight, abused, made up to, then forgotten Rose welcomes her Marine Eddie home from Vietnam, no hesitation. All is forgotten; all is forgiven:

Rose: I never heard from you. I didn’t know if you were alive, or….

Eddie: I don’t know why them. Why not me? (His buddies died.)

Life’s all about Eddie and how he feels. Rose’s feeling matter not. Just imagine what sort of life Rose might endure with Vietnam veteran Eddie over the next decade or two, if he doesn’t desert or murder her before long.

Misogyny permeates American society. From the derogatory ways mainstream media routinely judges women as objects, to the light punishments national sports figures receive for abusing the women in their lives, to the 468 times politicians have attempted to “regulate” women’s bodies in 2014 (zero attempts to so “regulate” men), to the fact that a woman is assaulted or beaten every 9 seconds in the US, misogyny functions at epidemic proportion across most strata of US society. I take notice when a stage play delves into the subject, particularly when it makes little attempt to react to the status quo. The play title ”Dogfight” refers to a barbaric ritual game some men play. They put money into a pot then troll individually for a “date” to a group party, with a real kicker of a competition twist. They each search for the ugliest, fattest girl they can find to be their date. The winner, he who has the “ugliest date”, wins the pot of the “dogfight.” In Pasek and Paul’s “Dogfight”, one of the women, Marcy, played with a brilliant, taut edge by Beth Albright, extorts half of the prize money from her Marine “date” as price for attending the party with him. It’s a pitiful “win”, as he tosses the money at her feet with contempt. I find the misogyny of this ritual repulsive and hard to watch. The opening night audience, as well as the characters in the show, seemed to take great delight in laughing at the plain, fat women getting demeaned in the scene. When the lead female character, Rose, discovers how she has been duped by Eddie into accompanying him as his “date” and shouts, “You’re the ugly one!” some in the audience cheered, while others jeered and tittered. It makes me queasy to recall.

So, innocent Rose, played by the beautiful, plus-sized Juliette Talley with a stunning voice, forgives foul-mouthed, arrogant, overbearing, deceitful Eddie and invites him into her bed for his last night in San Francisco, as consolation for speaking a wee bit harshly to him. He leaves, promising to write and never does. Once again, she forgives and welcomes him home when he returns, mumbling, “I’m sorry” to her. What exactly does this say is acceptable in behavior from men to women? What does it do to counter the prevalence of mistreatment of women as an “acceptable norm”? I believe passionately in art’s capacity to change lives and help us all find higher purpose. I didn’t find that in “Dogfight”.

The production: It’s basically flawless. Director Terry Martin cast a strong ensemble of mostly 20-something actors. Along with Music Director Mark Mullino and Choreographer John De Los Santos, Martin helped them transform into believable characters from 1963 in speech, song, style and carriage. De Los Santos’ choreography in “Some Kinda Time” and “We Three Bees”, using all levels and aspects of Michael Sullivan’s enticing, multi-hued, 1960’s-style, stained-glass framed set, made the stage feel like it brimmed over with an entire company of testosterone-driven young Marines, not just a mere handful. The music dazzles and soars, composed by the critically acclaimed duo Benj Pasek and Justin Paul. The sound feels young and fresh, yet still of the era depicted; no wonder it drew so many excited younger audience members to the theatre opening night. In addition to the stunning Juliette Talley and heart-breaking Beth Albright, the cast includes: Zak Reynolds, Kyle Igneczi, Matt Ransdell, Jr., Branden Loera, Matthew Silar, Joseph Burnam, Stephanie Riggs, Aubrey Ferguson and Steve Barcus.

Dogfight is the winner of the prestigious 2013 Lucille Lortel Award for Outstanding Musical.

Through August 17th in Addison