Man’s fascination with the horse began when an early human first peered over the crest of a grass-covered hill to watch a herd storming across a plain, wild and free. Artists have strived forever to express the magical relationship between horse and human. But nobody puts on a horse show like Cirque du Soleil co-founder Normand Latourelle, Artistic Director/ Creator of CAVALIA ODYSSEO. This current spectacular $30 million offering runs through February 22 under the big white top at the Dr. Pepper Ballpark (7300 Rough Riders Trail, Frisco, TX 75034).

Imagine a breath-taking multi-media, multi-cultural celebration of the horse-human connection on an unprecedented scale in an epic nature fantasy setting. ODYSSEO presents a magical immersion experience for all attending, one that brims over with music, visual delight, amazing feats of physical challenge and unending respect and love. Meet horses and humans communing in palpable love-fest.

Sixty-three horses, geldings and stallions, are the stars and catalysts of the show. Whether the scene features a herd of delicate, silver-coated Arabians cavorting at liberty with one gentle female handler or a choreographed cacophony of daredevil trick-riding exploding off the backs of massively powerful sport-horses charging at breakneck speed, human response arises out of respect and love for the power and freedom of the horse. Human-only interludes seem inspired by the horses at play. Sensual, white silk-draped aerialists sky-dance 45 feet up in yin-yang unity atop the merry-go-round. An exuberant troupe of New Guinean acrobat/ drummer/ dancers exhorts the audience into responsive singing and clapping. Spirit horse transforms all with ethereal benediction. 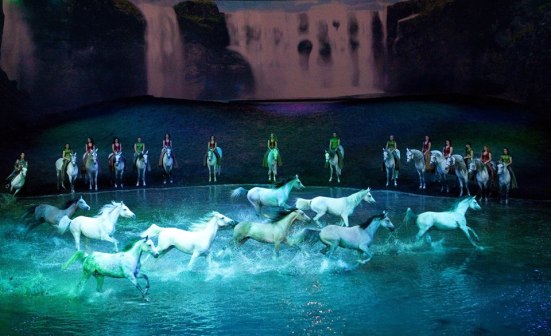 CAVALIA ODYSSEO engages its audience as witness to the union of art, sport and nature, arising from the vision of Normand Latourelle and his team of intrepid artists. And the horses, just being themselves….

Alain Gauthier, Choreographer for “The Angels”

A version of this review appears in THE DALLAS MORNING NEWS: http://www.dallasnews.com/entertainment/headlines/20150130-horses-reign-in-odysseo-at-friscos-dr-pepper-ballpark.ece