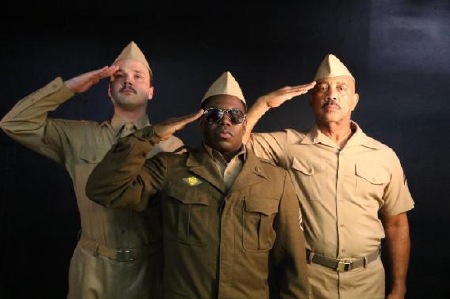 Picture this: a military lawyer arrives at a base to investigate a crime. Considered an outsider, he finds himself deeply resented by those in charge. He presses on, however, determined to do his assigned job. Under his investigation’s gaze, the suspects in the case, the play’s characters, reveal complicated motives, sending first one and then another into the spotlight of suspicion. While this sounds straight out of Aaron Sorkin’s A Few Good Men, it’s actually the setup for Charles Fuller’s A Soldier’s Play, a mystery/drama that won the Pulitzer Prize in 1984, five years before Sorkin’s bow on Broadway. As currently presented by African-American Repertory Theater at the KD Studio Theatre, A Soldier’s Play is a well-structured whodunit. AART’s production provides some of the most engaging drama you will find on any stage in the D/FW area right now.

Set at Fort Neal, Louisiana, during World War II, the play is a portrait of how the Jim Crow South affected the U.S. Military at that time. Black soldiers are allowed to serve but without any clue if they’ll ever see action. Tech/Sergeant Vernon C. Waters (Hassan El-Amin) has been murdered, and Captain Richard Davenport (Christopher Dontrell Piper) has been dispatched to find his killer. Although they never share any stage time together, a palpable chemistry between Piper and El-Amin permeates the play. As one man tries to understand the other, the other seems to want to desperately explain his actions from beyond the grave.

Director Willie Minor crafts a sparse environment that focuses on character instead of scenic elements (Josh Hensley is credited as Set Consultant and Construction). This allows every member of his tight ensemble to shine with nuance and depth, from skeptical Christian Taylor as Captain Charles Taylor to shy and simple Brandon Christie as Private C.J. Memphis. Lynn Andrews (as Private First Class Melvin Peterson) functions as a stand-in for the audience, becoming insubordinate when he knows things just aren’t right, keeping the onstage atmosphere taut and on edge. AART’s performance ultimately belongs to El-Amin and Piper. El-Amin (Dallas Theatre Center’s Brierley Resident Acting Company member) portrays Sergeant Waters as a powerful, complicated man and leader, as flawed as he is strong. Piper’s Davenport remains cool, calm and in charge on the surface, yet you can sense palpable uncertainty bubbling underneath. Watch his understated reality unfold, with pitch perfect mastery. 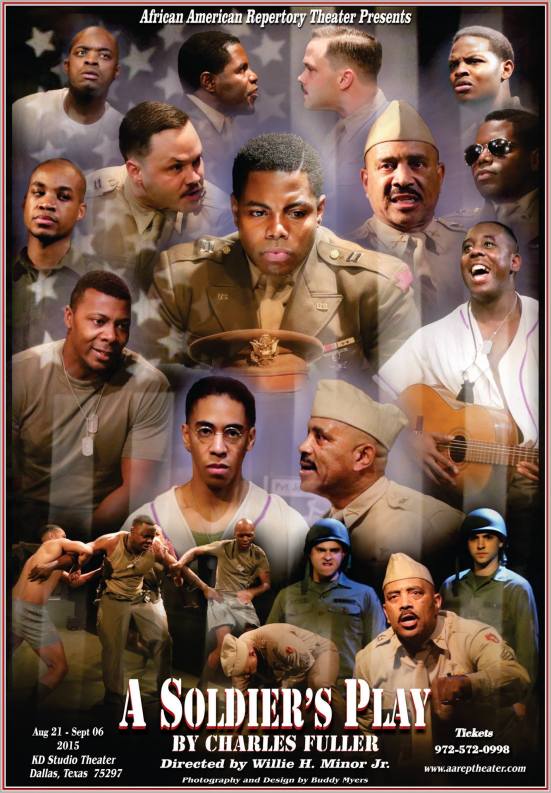 As #BlackLivesMatter has been at the forefront of our consciousness lately, how fitting to showcase the similarities between modern society and the Jim Crow attitudes of the pre-Civil Rights Movement era. While we may have abolished “whites only” water fountains and segregated lunch counters, White America still clings to a blind spot when confronted with what it means to breathe while black. Captain Davenport’s blackness bothers and worries white Captain Taylor, but not exactly for the reasons you might think. Beyond the examination of racial tensions, A Soldier’s Play is just a darn good play. AART has assembled a top-notch team for this production, and it deserves full houses for its run. AART’s work isn’t just for African-Americans. It’s for all of us. Put this show on your calendar.