Samuel D. Hunter is a big-time national playwright, winner of the prestigious MacArthur “Genius” Fellowship (a no- strings $625,000 cash award), most famous for his play “A Bright New Boise”. Ever heard of his play “The Whale”? It’s where a regular-sized actor gets to play a 600-pound man, wearing a fat suit. A “fat suit”? That’s a specially designed suit that goes under a costume that ends up looking exactly like a really, really fat person would. The actor climbs into it like a space suit, almost, without a helmet. Most movement gets restricted, so the actor better know how to use his voice and facial expression really well to communicate on stage. In the case of L.I.P. Service’s production of “The Whale”, opening October 8 and running through October 24 at the FireHouse Theatre in Farmers Branch, experienced professional actor and L.I.P. Service’s Artistic Director Jason Leyva will have no problem enlivening the character, in fact he relishes the opportunity. But even if the audience comes to the play out of curiosity about seeing the 600-pound guy in a “fat suit” worn by a 150-pound actor, Leyva hopes they will get fascinated with the play’s story and expressive characters. As the play’s director Danny Macchietto tells his cast frequently: “Charlie isn’t a stereotyped “fat guy”. He’s a regular guy on his own, trying to make sense of life. The play isn’t about the fat suit, or Charlie’s health issues. It’s about the “revisions” we choose to make that can give us a deeper, richer experience of our lives.” I interviewed Macchietto about the production, to gain insight into its creative development process and his commitment to the challenging work.

How did you first connect to L.I.P. Service and Jason Leyva? I had heard about Jason from other artists across the region, that he was totally dedicated to the art of theatre. I had not performed for some time but hoped to get involved in a small way. In 2011 I auditioned for him. I ended up in his production of “Playing With Fire (after Frankenstein)” and it hooked me. It was clear that Jason wanted to work with people who hope to learn and grow and take art seriously. He’s a magnet for people who want to do the art to honor the art, not just for fun.

Is “The Whale” your first directing venture? I pictured myself directing in my late 40’s, so this is really exciting to leap into it in my 30’s. After I performed in Jason’s production of Howard Korder’s “Search and Destroy”, he approached me about directing. 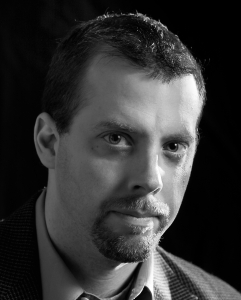 Danny Machietto, Director of “The Whale”

I told him I wanted to fully prepare myself for the task, and it needed to be a show I cared passionately about. He said he’d like me to find something he could perform in with his high school-aged daughter Sadie. After an extensive search on play service sites, I found a play called “The Whale” that piqued my curiosity. I read its first page, where a writing professor instructs his online students about Fitzgerald’s The Great Gatsby. I was struck immediately by the play’s humanity, complexity, and depth. It fired me up. I knew I’d found the right play to direct.

How would you describe your directorial process with this play? It has so many disconnected parts; I wondered at first how to integrate them. I started compartmentalizing layered moments, trying to separate the forest from the trees. Just looking at Charlie’s issues, the main character…there is his past life, his loss of a loved one, his relationships with his estranged daughter, his enabling nurse and his ex-wife, and the young Mormon visitor Elder Thomas with his own complicated agenda. I found that the unifying thread to the whole work appears as life “revisions” throughout the play, our human need to edit ourselves, a type of self-censorship. Besides its exploration of deeply personal issues, the play has lots of humor. I wanted to be sure to foster that aspect, too.

What has been the biggest challenge in directing “The Whale”? Interestingly enough, it has been how to integrate Charlie’s breathing problems into the play. He has congestive heart failure but also the most lines and a big monologue. So he can’t just “over-breathe” huskily throughout the entire work. We had to find places in the text where he could control his breathing and speak normally so audiences could understand him.

Talk about your cast: Every actor in this show has shared with me a personal experience that makes them connect deeply to this piece. Every one is personally invested. Jason’s daughter had school conflicts and couldn’t be in the show. As Charlie’s daughter I cast the fine teen actor Taylor Donnelson, who I had seen as part of Jeff Swearingen’s FunHouse Theatre youth acting troupe, a very professional, dedicated young lady. The dynamic Leslie Boren plays Charlie’s ex-wife. She brings an all-encompassing power to her role. As Charlie’s best friend and nurse, Amy Cave brings aspects of her always-busy life into the very special Platonic relationship she and Charlie share. She seemed to instinctively know from the start how to find the reality, the caring and the hope in her character. R. Andrew Aguilar is developing his conflicted Elder Thomas character with no trace of predictable stereotype. He has no problem finding Elder Thomas’ unexpected power notes or acting impulsively. His character is an outsider like Charlie, a vivid reflection of the older man in many ways.

Why should audiences attend this play? Overall, they will get to see a unique, intimate, emotionally real work of art by a master playwright in its first production in our North Texas region. It’s a chance to see an accomplished, professional, gifted actor, Jason Leyva, do something very difficult, harbored as he is within his special 600-pound man suit, confined to a wheelchair. Is his character Charlie on his own “Leaving Las Vegas” style suicide mission? This play could be seen as a tragedy because Charlie is dying. But it’s not. It’s hopeful and loving. It’s about how Charlie chooses to spend his last remaining days on Earth and his impact on the lives he touches. I hope audiences will come see how that unfolds.

L.I.P. Service’s “The Whale” opens October 8 and runs through October 24 at the FireHouse Theatre in Farmers Branch, 2535 Valley View Lane.

For tickets and information: www.Lipserviceproductions.info 817-689-6461