L.I.P. Service’s features as its company slogan “It’s all about the ART”. Actor Austin Cline, currently featured in the L.I.P. Service production of Durang’s Laughing Wild in a double bill March 26 with Fun House Theatre and Film’s topical Theatre of Politics, might add to that “…and taking risks on stage.” This 6’3”, blue-eyed Paul Newman-ish 2015 graduate of the University of Colorado bypassed easing into the Dallas acting scene by throwing himself into a range of roles that allowed him to use his diverse theatrical and musical training to full advantage. So far, he’s played Eddie/Dr. Scott in The Rocky Horror Show, Princeton in Avenue Q, Seymour in Little Shop of Horrors, and now the most peculiar and unusual “Man” and The Infant of Prague in the absurdist Laughing Wild. As engaging and genuine in person as he is compelling, charismatic and at ease on stage, Cline is an asset to the expanding L.I.P. Service company of artists and the arts community in general. 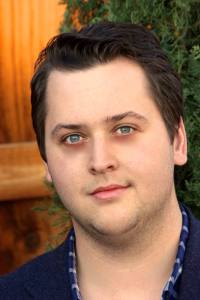 Cline grew up on the stage, or behind it. With his father a long-time rock musician, Cline has worked as his roadie for years and a sometime singer. Off to college, he wanted to keep singing and got into musical theatre where he immediately got cast in a lead in Jekyll and Hyde. Hooked, he took ever theatre class he could. He grew up in the Carrollton/Plano area, so he came back home after college to see what the regional scene could offer. As an actor, Cline says he isn’t afraid to make choices, but he relishes a challenge from a strong director with clear vision to “kick his butt into gear.” Jill Lord at Oh Look Productions really impressed him when he played Eddie/Dr. Scott in The Rocky Horror Show. “She expects a lot but really puts full faith in her actors to come through.”

He met L.I.P. Sevice’s producing director Jason Leyva at the auditions for Brighton Beach Memoirs at Firehouse Theatre in 2015 and felt so impressed with his warmth and knowledge he knew he wanted to get involved with L.I.P. Service. He worked with company members Shawn Gann and Laughing Wild director Araceli Radillo Bowling in Avenue Q at Lakeside Community Theatre and felt even more drawn to the company. He decided to audition for Laughing Wild, even though he believed the role of The Man would go to a more established actor. He was totally prepared to build sets or work in some capacity and was shocked to make it to callbacks. “Araceli made it clear that there will always be a place for the sincerely dedicated at L.I.P. Service.” He has never had to memorize so many monologue-style lines before, but discovered that the Durang script supported this challenge as an actor, with such a natural flow. “I love my character’s rants, as I have some of the same rants myself!” Cline hopes the audiences for Laughing Wild will empathize with the pain, the humanity and the humor of both characters in the show. “My character has such anxiety and a deep desire to become happy. I think the take-away for the audience is to create your own silver lining; choose to make yourself happy, and you will be.”

Austin Cline with Monalisa Amidar in Laughing Wild, going for The Tuna!

All of us at L.I.P. Service welcome Austin Cline into our diverse tribe of creatives and look forward to his contribution as a way cool dude and artist. Come see him tonight March 26 with Monalisa Amidar in the final performance of Laughing Wild at The Firehouse Theatre in Farmers Branch at 8pm. Jeff Swearingen’s Fun House Theatre and Film opens at 7pm with the irreverent, topical The Politics of Theatre. Art imitating life, or the other way around? It’s ALL about the ART…just ask Austin Cline.

7pm Theatre of Politics with Fun House Theatre and Film