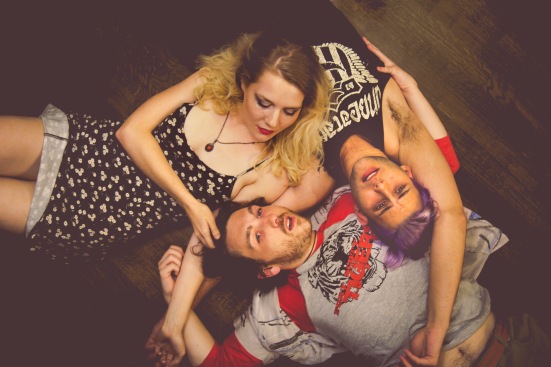 I picked a table up front and kept my head on a swivel. Action is all around, behind and balcony above. Mid show some patrons moved to put their back against the wall.

Intimate space has sets for dope house, crash pad, kitchen, pub, whatever they need. Take a moment to stroll and mingle when you step up to the bar for a soda or beer.

Play is based on 1993 book by Irvine Welsh and 1996 film, about young heroin addicts romping across Scotland and London. Sex, drugs, rock and roll, violence lots of naked boys and girls. Toss in (clove?) cigarette cloud and amp running just below distortion. Heed warnings scrawled on entrance. My date rolled ear plugs, for survival.

Tale is graphic warning to avoid drugs. Makes point that heroin is tremendous rush, but addiction, crash is brutal and lethal.

Players shot video for background and surreal drugged out effects.  Accents are Scottish, and consistent, but no so thick to need subtitles. Just over hour n half straight through. Some folks seemed surprised when it abruptly returns to disco light show finale. That’s your que to applaud n wander through the fog into the night.

LIP Service hasn’t had much regional notice. Their other home is Firehouse Theatre, across from DART Green Line Farmers Branch Station. They snatched bigger audience and attention with The Good Thief solo show at Bath House Festival of Independent Theatres in July. Brutal tale of Irish hit man’s last adventure. R. Andrew Aguilar returns in Trainspotting as a drugged out bouncer, so “mind your P’s and Q’s”.

Begbie, Caleb Pieterse, is the pschyo mate in this crew. Steer clear of him as well. Story revolves around Renton, Dustin Simington, getting high, attempting to get clean, turning on his mates and making a right mess of his life. Tommy, Conner Wedgeworth, and “Sick Boy”, Lauren Mishoe, completes circle of boy hood mates. Mother Superior, Jason Villarreall, in nun drag is the dealer and host to fuel this party. Jad Saxton, Erika Larson and Leslie Boren are the birds who take more than their share of “shite” on themselves and their babes, their bairns. Ryan Smith, directs and Jason Leyva produces.

The title? Train-spotting is UK version of bird watching, but not really. Not essential.