Cara Mia Theatre Co. aims to enchant Dallas theatregoers into the holiday spirit with their original family comedy favorite Nuestra Pastorela, opening Saturday November 19th and running through Sunday December 11th at the Latino Cultural Center. Directed by top-drawer movement and combat specialist and Cara Mia member artist Jeffrey Colangelo, the family friendly play unfolds as a humorous re-enactment of the Nativity Story in Bethlehem, Mexican folktale style. Clownish shepherds and their clever sheep, dutiful Mary and Joseph, saintly Angel Gabriel and a bumbling duo of dastardly devils scheming to cause chaos with the seven deadly sins, will tickle the funny-bone while landing gentle socio-political digs along the zany, zigzag pathway. If life is getting you down of late, this is sure to pick you up.

What is a Pastorela exactly? According to University Of Arizona’s Southwest Folklife Alliance, La Pastorela, “the Shepherd Play” has a rich cultural, literary and performance history dating back to the 16th century in Spain and Italy as a Nativity drama with simple plot structure. Gullible shepherds trek to Bethlehem in search of God’s gift, El Nino Dios. A powerful evil devil, Lucifer, assisted by dimwits, attempts to distract them from their goal. A blessed angel helps the “pastores” prevail over Lucifer, showing that God’s gift and love are stronger than Lucifer’s malevolent avarice, amoral values and shallow promises. When the Catholic clergy arrived in the New World tasked with enacting dominion at any cost, it adapted elements of existing well-developed folklore into holiday dramatizations to spur conversion among the “ignorant” natives. But, alas, the art form grew beyond a not so subtle indoctrination model. Here’s what makes it a popular folk theatre genre with modern appeal. The stock characters remain pretty much the same in some aspects, but playwrights have free rein to create them in the images of contemporary political figures or cultural icons in need of a good drubbing by regular folk, allowing for sly reversals, slapstick horseplay and hearty laughs. According to the SFA, “one year, in Tucson, the devil appeared as Donald Trump tempting the pastores to become his “apprentices.” What Cara Mia Theatre Co. presents in Nuestra Pastorela falls into this tradition, without identifying any public figures directly or indirectly.

Back in 2003 Cara Mia’s Artistic Director David Lozano studied clowning and mask-making in Mexico, where he first encountered an array of pastorela folk performances in Mexico City. He says he was drawn to them as they “were full of song, dance and physical comedy. They also appealed to me as they had a clear political dimension with the shepherds, the pastores, who represent the working class, everyday people.“ He liked the fact that the battles between the devil and the pastorelas were always waged in a comic, slapstick manner. A popular art form, “probably a million different pastorelas are taking place across Mexico right now, in schools, churches, cultural venues and on the streets,” Lozano continues.

When he came back to Dallas after his stint studying in Mexico, Lozano decided that writing a pastorela would fit perfectly into Cara Mia’s mission. He decided to add clowning to the shepherds, giving them clown noses. “Clowns are super-human. And I don’t mean they are super heroes although they could be. Clowns are essentially human. They are fantastic reflections of our very own our humanity.” So, with the production’s first director, Jeffry Farrell, over several months the two artists wrote Nuestra Pastorela. And mounted it in 2005.

When asked why remount it now, Lozano pauses and considers the question then responds with compassion and commitment. “Part of Cara Mia’s spirit extends off the page, beyond the canon of text-based published plays. This work demonstrates an integral understanding of clowning and movement. Body and space become the text, as opposed to working reverentially from the published page. This play embodies a core element of Cara Mia’s aesthetic and arises from a long tradition of Hispanic theatre.” 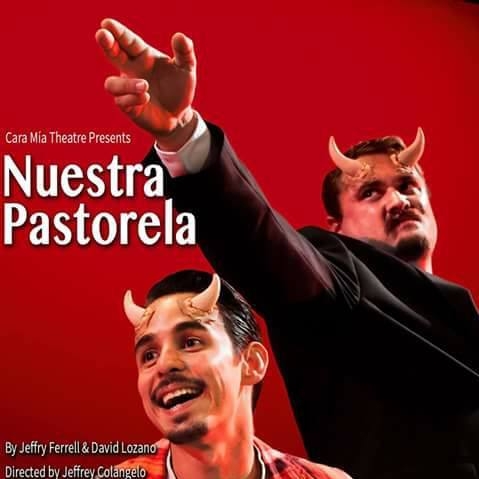 Lozano is thrilled to have company member Jeffrey Colangelo directing this time. “Jeff brings a genuine sense of play and honesty to the work, approaches it with total innocence and wonder. I placed no limitations on what he was “supposed to” do. He always brings such a sense of adventure to his creative projects.” Lozano feels Colangelo cast a dynamic ensemble, with a mix of new and regular cast members who fill the production with comic vitality “It’s a joy to watch resourceful newcomer Omar Padilla play Pingo, the bumbling lieutentant devil to Luzbel. Coming from Mexico, he has enormous familiarity with the pastorela genre. Elastic, wiry and playful, he provides worthy, comedic contrast to R. Andrew Aguilar’s tall, brawny commanding Luzbel. the devil. Along with seasoned regional performer Shawn Gann joining the ensemble for the first time, Cara Mia favorite and senior company member Frida Espinosa Müller portrays a principle pastorela clown.” Come for the laughs; absorb the message of love and transformation; celebrate the timeless vitality of a longtime Hispanic theatre genre. Theatre of, by and for the People.

History of the genre drawn from posts on the Southwest Folk Alliance website.