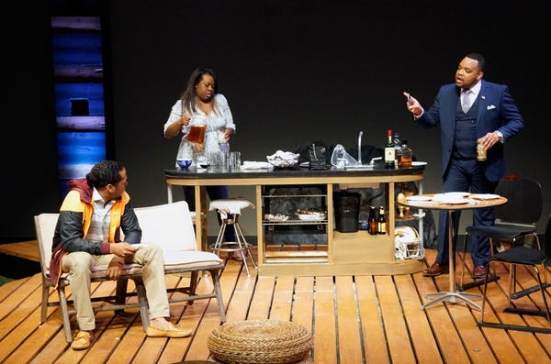 Dallas native playwright Regina Taylor’s new play Bread,  in its world premiere as commissioned and produced by Water Tower Theatre at the Addison Theatre Centre, promises a tasty treat judging by the enticing scents wafting out from its dramatic oven as it opens. It’s a play you hope to sit back with, inhale deeply and savor. Sadly, it comes up a few slices short of a satisfying, full loaf as it unfolds. Its rushed, trendy 90 minutes, with no intermission, contains too many plot threads that emerge out of thin air with predictable result, as well as stereotypical characters that lack clear motivation or defined arc. The thrust set with revolve and partial moat, a display of technical wizardry, designed by Clare DeVries, adds a welcome depth of dimension to the Centre’s static main stage theatre void and draws the eye in. Unfortunately the special effects that finally arrive from this wizardry at play’s end are puzzling, high drama gimmicks that seem borrowed from some other show with no particular connection here. The show opens with a potent, hopeful lyricism built around the metaphorical description of “bread”. One waits and waits for this fragrant, vital metaphor to re-emerge and knead the ragged jumble of cobbled elements together. Alas it never returns, as the revolve spins and rain, not figuring into the script literally or metaphorically anywhere, pelts down from the heavens into the moat and onto part of the set at curtain. Not sure if revolve/moat/ rain are part of Taylor’s script in some other iteration or just a clever add-on by the production’s out of the area director, Leah C. Gardiner. Esteemed colleague and I turned to each other as one with bemused shrug. What’s the grand environmental gesturing all about? Poignant, dignified final moments turn into spinning, soggy ones.

The ensemble cast of six works effectively together, adding a level of interest even with the script’s shortcomings. The versatile Stormi Demerson, as the very pregnant protagonist, drives the show as its most fully realized character. In contrast, M. Denise Lee’s character adds very little to her scenes as written or directed, leaving the dynamic Lee floating without much reason for being on stage at times, staring at her shoes. Intriguing newcomer Elliot Marvin Sims brings a charming vitality to his pivotal character of the family’s teen son about to start college at SMU. His rap interludes punctuating the show add worthy poetic edge (Sam Lao, composer) but need sound level enhancement to be understandable. Having him deliver the rap upstage makes a strong visual, foreboding in shadows, still largely drowned out by accompaniment.

Bread shows considerable promise but needs expansion and refinement in terms of plot and character development, scrutiny over this staging. This loaf isn’t quite ready to come out of the oven yet, but it still merits consideration as an honest effort. The cast includes: Djore Nance, Bryan Pitts and Calvin Scott. Bread is the recipient of a 2017 Edgerton New Play Award. It runs through May 6, 2018, at the Addison Theatre Centre. http://www.watertowertheatre.org