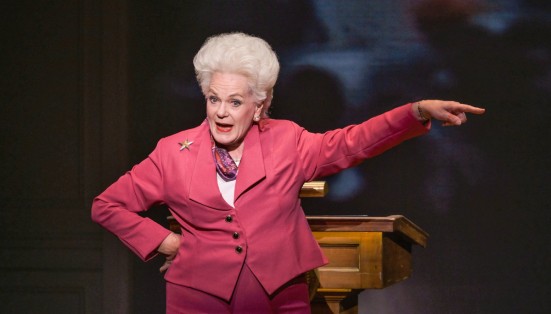 Ann Richards would spit nails. If she were alive today, Texas’ outspoken 1990’s Democrat governor might exclaim, “Why in tarnation is a lying, hate-mongering, racist, narcissistic abomination allowed to squat in our White House?” Here’s the best ticket to inspire hope for the soul and future of our nation and send voters to the polls in 2020. Broadway hit ANN returns to Austin through September 8. Grab your tickets and get darn ready to get lit on fire.

“Here’s a chance to play somebody that would use every single dot of what I could imagine I would ever be at my very best. It’s meant the world to me.”
Holland Taylor, creator/originator/playwright of ANN NYTimes 2/13/17

How often do you hear any audience cheer a set reveal? An anonymous college graduation speech bookends the show, delivered downstage center by Governor Ann lolling comfortably on a podium. Warm, witty, personal and a tad off color, the opening speech acts as laid back preamble for what follows. Stage curtains slide back as Governor Ann’s ghost straightens her shoulders and strides into a magnificent reconstruction of her 90’s Texas Governor’s office that floats into place down center on silent hydraulic gears. It’s a full-on WOW. Audience gasps and cheers as nostalgia merges with present reality. Ann Richards, vibrant, present, raw, demanding, conniving, wisecracking, multi-tasking, humanitarian, responsible and caring shares a day in her life as Texas’ #1 Citizen, as if she has sprung fully back to life. Americans hunger deeply today for such a leader…one who doesn’t foster hate and intolerance of non-white people, or use a position of power to trade off national assets for personal wealth, or disrespect genuine international allies while praising dictators, or lie incessantly, or rip babies away from families to cage them, laughing while the kiddos suffer or die of neglect and mistreatment. Not one word of the 2013 script has been altered for the current production. Yet it resonates with such power today that cheers of relief punctuate the performance throughout. Masterful for any time, in today’s world Taylor’s script is balm for the soul and respite for the sorrow and outrage caring citizens feel for the disgraceful state of our nation.

Carrying the full weight of this powerful production on slender, resolute shoulders, respected stage, television and film actress Libby Villari inhabits Governor Ann with a natural vitality and veracity that feels more like a blessed reincarnation than any sort of calculated mimicry. Her interpretation of Ann’s signature twang crackles with honest, if raunchy, humor and irony. No fools will be suffered, by golly. Ranging from impatient to reflective, impishly naughty to fiercely demanding, the multi-faceted script requires a full range of emotional transition at supersonic clip. Villari masters the challenge as if it wells up easily, spontaneously, from some well of humanity deep inside. It feels so good to imagine our Ann is back and ready to slay monsters. Director Klein praises Villari’s bravery in taking this role on, given the show’s previous success with its originator Taylor. But this actress owns every aspect of it as if fresh, never presented before. In 2018 Villari toured a grassroots-style production of the show (with minimal set pieces loaded into the back of her pick-up truck) across North Texas with Taylor’s full blessing, as a personal benefit for Senatorial candidate Beto O’Rourke’s campaign. She ended up raising several thousand dollars for Beto, all individual ticket sales handled through ActBlue online. Texan Villari channels some of Beto’s palpably honest humanitarian integrity in creating her portrayal of Governor Ann.

At show’s end, Governor Ann steps back into her graduation speech reality, but now she exhorts the audience with almost saintly intensity.
“For me and a lot of public servants it’s almost a calling—Not from “on high”—but from within—that in our core we feel we can make life better for people, in a way beyond our family. But for all us citizens—men and women—we’re all in this together…Think of all those people from around the globe who leave everything behind—their homelands, their families, all they have—to come to our country, where they can vote. What will they say of our time? It’s not that good things always happen when good people vote—But it is darn sure true that bad things happen when they don’t vote. And voting is the least of it.”
If anyone leaves this performance of ANN dry-eyed, without renewed commitment as an American citizen to make a difference, to vote, and to protect the tenets of our democracy, they just aren’t listening. Governor Ann Richards would spit nails. This is how great art can impact lives.
Holland Taylor’s ANN, directed by Benjamin Endsley Klein, starring Libby Villari, runs through September 8 at Austin’s Zach Theatre.
For tickets: http://www.zachtheatre.org

Alexandra Bonifield is a passionate theatre journalist and NEA/Annenberg and O’Neill Critics Forum Fellow in criticism. She is also a progressive political activist, relentless advocate for Beto O’Rourke for President and a partner in the BlueWaveTexas2020 Booth at the Texas State Fair in Dallas, dedicated to registering Democrats and promoting progressive candidates at the grassroots level.