It’s all Greek to me. Why is it that people are afraid of attending classical theatre — Shakespeare and the Greeks? Their plays offer some of the best writing, plots and characterizations ever seen on stage. Clear, logical, illuminating. Illustrating this is MBS Productions‘ current offering Oedipus Rex, a famous Greek play about a man who gets way too big for his britches with dire consequence. In an elegant, simple manner, Mark-Brian Sonna’s production sheds fresh insight into the ever-conflicted human condition and honors the tradition of one of the oldest and greatest plays ever produced. What’s so frightening about that? 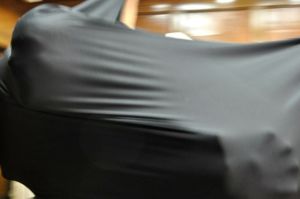 Good theatre doesn’t need a cast of thousands and a complicated set to make its point. In MBS Productions’ Oedipus Rex three Chorus members (who don’t sing harmony or wear sequined costumes) cover that required base for classical Greek Theatre and double in secondary roles, along with one member of the royal household. Anachronism adherents be damned, it may be traditional to cast a Chorus of twelve or fifteen to express various points of view and “witness” the play’s action in stylized enactment, but it’s overkill for today’s audience. We can think for ourselves, thank you. In addition, Greek theatre focuses more on character development than setting. Simplifying the set in the current production to an upstage curtain entranceway and a stage right altar to the gods allows the beauty of the language and the characters to hold deserved full focus.

What an emotional wallop this play delivers. Mark-Brian Sonna infuses the role of King Oedipus with dignity and regal bearing. He’s clearly a character used to making major decisions that affect the well being of many people. He doesn’t just act like a leader– he is one. Problem is he gets off on feeling omnipotent, and that offends the gods. He’s moved to a foreign land to avoid fulfilling a grisly prophecy (patricide and incest) and assumed a vacant kingship left open by a mysteriously murdered man and married the grieving widow. Problem solved, prophecy neatly side-stepped. Or is it?

As his wife and queen Jocasta, Alice Montgomery also exudes a regal bearing and a worldly-wise maturity. Her firm step and confident delivery tells that this woman has weathered many storms and has prevailed through her strong character and common sense. She creates a grounded mate for Oedipus who is prone to raging rants and mood swings. The four-person Chorus and minor character ensemble weaves effectively around the core couple almost like wraiths or spirits. Draped cloth covers heads and faces or falls back to reveal a character change when needed. As the truth reveals itself leading to suicide and self-mutilation, the chorus establishes the ambience and reflects response of the town’s inhabitants. Clear, logical, illuminating.

Directing the play as well as portraying Oedipus, Sonna incorporates appropriate stylized movement to balance the intellectual thought and emotionally charged expression of the work. Sometimes Greek theatre can seem so esoteric and discursive it’s hard to follow. Not here. MBS Productions uses a new, previously unproduced translation of the Sophocles play by Ian Johnston, which ideally suits Sonna’s movement-based directing style. The cast includes: Kevin Wickersham, Chris Hauge, Grisel Cambiasso and Joshua Scott Hancock. Each does an excellent job of bringing to life an aspect of this ancient great play in a way that allows it full resonance with a modern audience.

We’re all Berliners. We’re all just world citizens capable of being tripped up by fate and destiny,  like Oedipus.