Take a short trip back to the future. The 8th Annual All Star Playwright Festival and Annual New Play Competition sponsored by TeCo Theatrical Productions at the Bishop Arts Theater Center in Oak Cliff launched seven new one-acts this past weekend, penned by promising playwrights from across the metroplex. 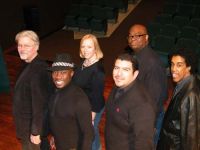 This year’s competition displays an 80’s theme, so all productions take the audience back to aspects of a recent cultural milieu that offers perspective and commentary on our world today, some with humor, others with poignant insight. They provide an entertaining, thought-provoking evening or afternoon’s jaunt back to that “kinder and gentler” future.

How does the competition work? More than twenty playwrights submitted short one-act plays in response to a general call for entries. A reading team of writers, theatre professionals and educators rated and scored all of them as to quality of writing and stage-worthiness. I was one of this year’s readers. The top seven scorers then advanced to the Playwriting Festival. At each performance, audience members vote for their favorite production. After the final performance February 21, the votes get tallied and the winning playwright wins $1000 in cash and airline tickets to the destination of his/her choice. A fine reward for all the hard work.

This year the playwrights include: a former stand-up comic and award-winning script writer; the founder of The Playwrights Forum; the artistic director and co-founder of a a well-established non-profit theatre company; an award-winning author, poet and performance artist; a Dallas-based renaissance performance artist with his own entertainment company; a graphic designer and film-maker; and a well-respected regional set designer and co-founder of a successful for profit theatre company. All bring a wealth of experience and a range of artistic focus to the performance pieces.

What gets reinforced in the festival viewing is how a script can be only as good as it is interpreted and performed, no matter how well written. In several cases, more polished scripts got saddled with less than stellar performances and unimaginative direction. Phillip Morales’ Back in the Day: Or How to Transcend the Mix-Tape and Carol M. Rice’s Waltzing Matilda’s, both interesting scripts at first reading, ended up a bit flat in production. Several other plays’ scripts, not quite as well crafted as literary works, sprang to life due to their tight, energized direction and spot on acting performances. Love, Snakes and Thriller by Rodman Goode and The Cosby’s: The Lost Episode by Buster Spiller both surprised and delighted me on stage when they had not impressed me particularly on the written page.

The strongest production was Rodney Dobbs’ Date Three, Date Four: ’83-’84. Powerful at first reading, this play presented the most consistent plot structure and fully developed characters, which changed in interesting ways from Scene 1 to Scene 2 as their relationship evolved. The play posits a clear snapshot of the era, in vivid direct contrast to a similar scenario today. It centers on a realistic setting of a dating couple with certain behavior expectations and mores reflective of the era. In Scene 1, Randy, played with natural ease and macho arrogance by Marty Moreno, discusses his “screw and scram” philosophy and how he doesn’t view this date as a likely conquest. Cavalier to the max, Randy boxes everyone into a disposable category. It’s hard not to cringe when he tosses off the thought that he doesn’t use condoms as there’s not much out there to catch from unprotected sex a shot won’t fix. Shannon Rasmussen, as Dana, plays her romantic co-dependence to the hilt with believable neediness in Scene 1. In Scene 2, they enact a similar meeting a year later. Dana has wised up and Randy is no longer “in charge” of his sex-life. This time, Dana, as realistic sex kitten with devil horns and tail, presents him with a condom en route to the bedroom. Suddenly her character expands to include the looming specter of AIDS in her alluring devil suit, an unexpected, effective combination of the realistic and metaphorical.

Very funny characterizations and efficient, fast-paced, believable blocking in Buster Spiller’s self-directed The Cosby’s: The Lost Episode elicit the most audience response of the evening. JuNene K. as Clair Huxtable is the hilarious stand-out of the entire performance with her multi-layered repeated delivery of the line, “Mama gonna tear that ass up.” Who knew that line could be so funny, said so many ways? Spiller’s solid cast includes Akron Watson, J.R.Bradford and Sequoia Houston.

The seven plays presented are, in program order:

The Cosby’s : The Lost Episode by Buster Spiller

To the Max by Camika Spencer

Back in the Day: Or How to Transcend the Mix-Tape by Phillip Morales