What’s a nice girl like Molly O’Leary doing performing in a Terrence McNally play about a gay Jesus?

She’s reaching out with a message of love and tolerance and entertaining her audience with lively, varied characterizations, that’s what…. Corpus Christi, the controversial “gay Jesus play” comes to Dallas courtesy of Los Angeles based 108 Productions this coming weekend in celebration of the Feast of Corpus Christi and promises to be at the least a thought-provoking, inspiring performance if not a shockingly unconventional one.

Terrence McNally wrote Corpus Christi in 1997 and inspired a hurricane-gale level uproar. According to the blog-site Gays Without Borders, he “created a gay Jesus partly as a way of exploring the feelings of rejection and persecution he experienced as a gay youth growing up in Texas. When the play opened in the UK in 1999 in addition to taking harsh criticism from conservative Christians, McNally became the target of a fatwa issued by an Islamic group.”  Islamic fatwa? Through a modern retelling of the life of Jesus in which Jesus and the disciples are all gay, McNally wanted to foster tolerance and acceptance. Instead, before its first production in New York, the play was nearly canceled after board members of the Manhattan Theatre Club received death threats if they allowed it to go forward. According to Wikipedia, “A production of the show by the company 108 Productions opened in 2006 and went on to become the most successful and well received to date.”  That’s who is bringing Corpus Christi to Dallas. http://www.108productions.org 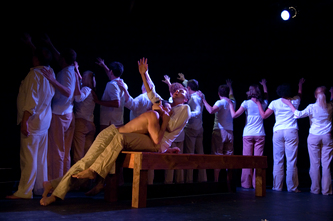 Molly O’Leary has toured the world as a Corpus Christi cast member with 108 Productions since the beginning and has never missed a performance.  I asked her to share some of her feelings about the production. Like other women in the cast she plays a mix of gender roles including the Apostle Thomas, Sister Joseph (Joshua’s drama teacher), Patricia Rudd (Joshua’s girlfriend in high school) and Lazarus. She says it doesn’t matter that she’s a woman portraying men; when her character Thomas enters s/he engages the audience on an internal journey, sharing a monologue that feels like a baptism in the word and reality of the play.

“Performing McNally’s incredibly spirit-filled work sent me on a personal quest, even to India.” She describes a New York Catholic priest’s reaction — exclaiming the performance “felt like a Mass, a beautiful ritual event.” Yes, they have experienced some protests, so will there be any in Dallas? Molly hopes, as do all her fellow cast members, that people will come to the Cathedral of Hope with open minds and hearts to honor Terrence McNally’s play Corpus Christi as a reflection of God’s love, tolerance and acceptance. May ‘corpus carma’ protect us all?

$1.00 from every ticket sale goes to  Cathedral of Hope AIDS Crisis Fund

About Molly O’Leary: Molly is thrilled to be playing the Apostle Thomas.  Her past theater credits include her one woman show, For Your Benefit, Heroine Addicts, Bits and Pieces, and Unsafe Sketch.  She is currently starring in The Todd and Molly Show (she plays Molly). You can also see her as Auntie Ruth in the webisode series WeHo.  Molly is most memorable as the “make a path, please!” lady on a recent episode of TMZ. You can look for her in the hit show, “So you think you can Dance?” but you won’t find her because she’s not in it.

About Terrence McNally: For his distinguished work as a playwright, Terrence McNally has received four Tony Awards, two Guggenheim Fellowships, a Rockefeller Grant, the Lucille Lortel Award, the Hull-Warriner Award, and a citation from the American Academy of Arts and Letters.