Heads or tails? Al Pacino, Robert Duvall, John Savage, Kenneth McMillan, William H. Macy, JT Walsh, William Petersen, Tracy Letts, Dustin Hoffman, Dennis Franz: names of some of the toughest, most charismatic, versatile and well-versed actors on the modern stage or screen who have performed in David Mamet’s gritty, profanity-laced, iconic working class drama American Buffalo since it premiered at Chicago’s Goodman Theatre in 1975. It opened on Broadway in 1977 to critical and artistic acclaim. So why does American Buffalo seem like a rambling, impotent, stodgy jumble, a masturbatory writing exercise in exposition (30 pages’ worth before much happens) and character development today?  Broken Gears Project Theatre’s current incarnation of the work, running through June 19 at ISP Studios in Irving, Texas, is a mixed bag of Ft. Knox gold and wooden nickels.

Maybe it’s really not built to pass time’s bite-test, or maybe it’s one of those sneaky plays that appear relatively easy to produce on the surface but require a higher degree of polish and skill from its actors and director than a well intentioned but novice performance company can muster. It’s almost a winner, as I call it. 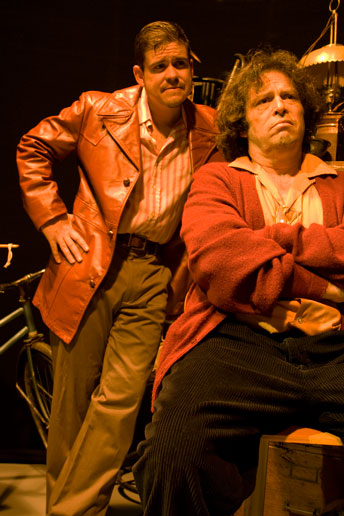 American Buffalo is about an essential part of American consciousness, which is the ability to suspend an ethical sense and adopt in its stead a popular accepted mythology and use that to assuage your conscience like everyone else is doing.

Roll out the wooden nickels. Mamet collaborator and Goodman Theatre production director Gregory Mosher asserts, “Mamet’s profanity … (is) an integral component of his characters’ “profane poetry” (that) worked the iambic pentameter out of the vernacular of the underclass.” Mamet may have worked out the elitist tones in his slice of life con-man gambit which speaks jaded volumes about the disintegration of the decaying capitalist system, but all three actors performing American Buffalo need to have comparable reverence for language and script, beat and nuance, tone and emphasis as any Sir Ian or Laurence have for Shakespeare’s work.

David Mamet brings you to the edge of your seat with language. Not just the force of it, but the cunning deployment of everyday American speech patterns that cut corners and pure grammar to distill hard meaning and veiled threats from the frenzied banter of a trio of articulate burglars in a downtown junk shop. Hearing Pinter for the first time must have been something like this.

This reverence was not evident in Broken Gears’ production, opening night, primarily due to the over the top performance of Mike Schraeder as Teach. Seldom have I seen as experienced an actor as his bio testifies he is jump repeatedly on other actors’ lines and cues, shouting over them if they raised their voices as required by the script. He refused to share focus or allow anyone else to set scene tone or tempo. My objection isn’t about “overlapping lines” or snappy cue pick-up; it’s that American Buffalo is not, NOT, a one-man show. Where was Director Diana Gonzalez? Her physical blocking of the ensemble worked effectively and created realistic pictures, including the blocking of stage violence, hard to make believable in so intimate a setting. Yet Schraeder entered Scene One in high dudgeon with nowhere to go but into orbit. By the climax of Act II, after all the high energy posturing, yelling and mugging, he simply seemed to wear out. Terry Yates (Don), an able, versatile, experienced actor, bore the brunt of Schraeder’s onslaught in shared scenes. Yates found the tempo and texture of Mamet’s language in dialogue with secondary character Bobby (Alex Worthington) and played with the dryness of this play’s black comic elements at every opportune moment. In 2009, Alex Worthington gave a chillingly real performance as Lee in Sundown Collaborative’s True West; in American Buffalo he unfolds a fascinating slow burn of poignant desperation and confusion as simple-minded, needy Bobby. I ache to see this young actor explore his talents and instinct for depth in stillness with a meaty role in a major, relevant work.

The Fort Knox gold of the performance? Mine it in Broken Gears’ production values. Set designer Cindy Ernst, along with her team of assistant designer/ head carpenter Joe Truitt, assistant set dresser Clare Kapusta, scenic painter Kaori Imai and properties designer Joel Frapart met the major challenge of creating a viable seedy junk shop circa 1970’s with style, class and veracity. It was hard not to wander into the set at intermission just to snoop through all the “stuff” collected. Yet the playing space remained well lit and open (tech director/lighting designer David McKee), allowing the actors to move about freely amidst the impinging chaos of clutter. Justin Locklear’s costumes capture the essence of the era and each character. Teach’s macho leather jacket and Western-style leather belt with white piping were notably outstanding. It’s clear that the collective brainpower within this young company is moving it in a first class direction. Did they stumble a bit with this production?  More of a miss-step than a major mistake. Their mission is to take risks with art, not “play it safe”—you have to admire their guts in mounting a difficult play forty years well past its first bloom. I’ll go back for a second viewing.  I believe the collective wisdom and creative instinct in the Broken Gears Project Theatre team may find the play’s artistic balance and master its non-elitist poetic language that set David Mamet apart in the 1970’s.

See my review of their production of John Patrick Shanley’s Danny and the Deep Blue Sea: https://sjamaanka.wordpress.com/2010/02/11/stages-of-love-mbs-and-broken-gears/

I’ll gamble more than a wooden nickel on their next season.