Charm enchants. It beguiles with a gentle, literate universality. Playwright Kathleen Cahill weaves a gripping tale of transformation and self-expression through the life experience of 19th century transcendentalist writer Margaret Fuller. Based more in the magic realm of Isabelle Allende than in the mannered containment of Jane Austen, Charm vividly portrays the societal, personal challenges faced by a brilliant thinker and journalist, liberated ahead of her time, as she interacts with celebrated male contemporaries.

Cahill brings Nathaniel Hawthorne, Henry David Thoreau, Orestes Brownson and Ralph Waldo Emerson to life with incisive veracity. She captures the essence of individual literary style, while presenting each writer as flesh and blood. All fall under the bewitching spell of outrageous, invincible Margaret. A rollicking homage, the play speculates about Fuller’s impact on the distinguished assemblage without rewriting history or exaggerating possibilities.

“It’s only dreamers who understand reality.” Margaret Fuller, lost at sea in 1850 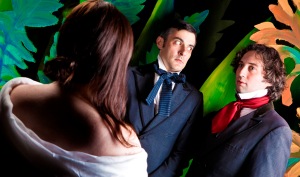 About Margaret Fuller, from wikipedia:

She was the first full-time American female book reviewer in journalism. Her book Woman in the Nineteenth Century is considered the first major feminist work in the United States. Daguerreotype by John Plumb 1846

About transcendentalism, from wikipedia:

“Transcendentalism is a term associated with a group of new ideas in literature that emerged in New England in the early-to-middle 17th century. It is sometimes called American transcendentalism to distinguish it from other uses of the word transcendental. The movement developed in the 1830s and 40s as a protest against the general state of culture and society, and in particular, the state of intellectualism at Harvard and the doctrine of the Unitarian church taught at Harvard Divinity School. Among transcendentalists’ core beliefs was the belief in an ideal spiritual state that “transcends” the physical and empirical and is realized only through the individual’s intuition, rather than through the doctrines of established religions. The major figures in the movement were Ralph Waldo Emerson, Henry David Thoreau, Margaret Fuller, and Amos Bronson Alcott.”