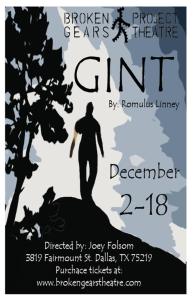 Gint. This spooky, unsettling play, part romance, part fantasy, part anti-hero’s journey, presents a challenging undertaking for Broken Gears Project Theatre as the company’s second production in its hidden Oak Lawn venue. It possesses quite a heritage, as second cousin to a great work, several times removed. Norwegian playwright Henrik Ibsen embarked on writing Peer Gynt in 1867, envisioning it as “a long dramatic poem, having as its principal a part-legendary, part-fictional character from Norwegian folklore during recent times.” He engaged acclaimed composer Edvard Grieg to create its music (resulting in 90 minutes worth of emotionally charged score which includes the recognizable Hall of the Mountain King). He also put Grieg out of sorts by demanding music for the fourth act that would reflect its “international” character, specifically the blending of national anthems (Norwegian, Swedish, German, French and English). Four acts long, often performed over five hours, occasionally over two nights’ span. Now that’s an opus!

“Why can’t people read the thing as a poem? That is what I wrote it as.” Henrik Ibsen 1868

Trivia associated with Peer Gynt speaks volumes about it , as well as about the  people determined to take it on:

“The universality of Ibsen makes his plays come home to all nations, and Peer Gynt is as good a Frenchman as a Norwegian.”                    George Bernard Shaw

Clearly, Ibsen’s work has fired the expressive imaginations of thousands. It’s a wonder that Orson Welles didn’t add it to his eclectic repertoire, set in some exotic locale.

And then there is Romulus Linney’s version. A prolific playwright and distinguished author, Linney has received fellowships from the National Endowment for the Arts,  Guggenheim, Rockefeller, National Endowment for the Arts and New York Foundation for the Arts grants, an Obie award, a Mishima Prize for Fiction, and the Award for Literature from the American Academy and Institute for Arts and Letters as well as four honorary doctorates from respected institutions. In 1998 he directed Gint, his adaptation of the play, at the Theatre for the New City in New York, setting the play’s action in early 20th-century Appalachia and California. This is the version, two acts, not anything like five hours, taken on by Broken Gears Project Theatre.

Director Joey Folsom has staged his production with a black on black minimalist motif: flat black walls in a black box thrust space coaxed out of a squarish room in an older house; actors in simple, modern black attire — leotards, sweats, t-shirts. A few odd stools and chairs comprise the set, along with a bank of upstage brush that comes alive in fantasy scenes. It’s a stark staging of a play that could lend itself to Taymor-like extravagance and works to some degree. Reducing the performance to actor and text means strengths and weaknesses become evident. The Appalachian conceit has conceptual appeal but jars hard against Broken Gears’ smart, cool, urban staging. Dressed as they are, the characters could roam the labyrinthine “canyons” of New York City, harder to picture them somewhere in Appalachia, circa 1917. Countrified accents were obvious in some performances, nearly non-existent in others. Linney’s script starts off crisp and engaging but lumbers along by mid Act I, episodic soap opera-fashion, and doesn’t ever really pick up again in spite of some appealing moments. The ensemble of actors works well together, creating relational realities in each scene, even with torchy dialogue. Ginger Goldman, by no means a mature actress, gives a strong, sympathetic performance as Gint’s aged mother. David Jeremiah, with powerful presence and vocal expressiveness, makes the fantasy “Hog King” come terrifyingly to life and gives a moving portrayal in Act Two of a small town preacher. Abel Flores’ Indian medicine man, the play’s symbolic Angel of Death, lurks patiently and persistently, summoning Gint to him by unworldly presence more than words. Drew Maggs displays the brutish physicality needed for the role of Gint and applies himself with enthused dedication but never quite sells the character’s outlaw nature with conviction. Sometimes he seems to narrate the role, rather than live it. Unusual, dark, psychologically disturbing, Gint makes a worthwhile evening of theater, even as a major work’s second cousin. Interesting to see if Folsom, like Bergman, will stage it again in thirty odd years.

A marvelous rendition of Grieg’s In the Hall of the Mountain King, by Deutsches Filmorchester Babelsberg: